Who are the Bad River Band of Ojibwe Indians?

The Bad River Band is one of six Ojibwe bands in Wisconsin that are federally recognized tribes.  The Chippewa or Ojibwe Nation is one of the three largest native nations in North America. 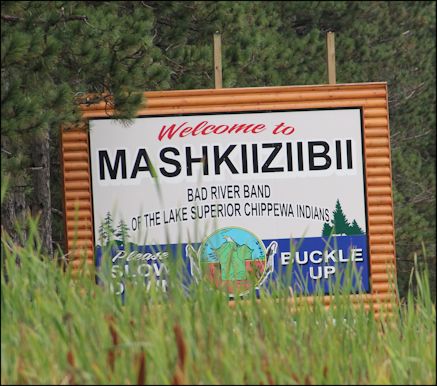 Today the Anishinaabe have two tribes: Ojibway/Ojibwe/Chippewa (Algonquian Indian for “puckered,” referring to their moccasin style) and Algonquin (probably a French corruption of either the Maliseet word elehgumoqik, “our allies,” or the Mi’kmaq place name Algoomaking, “fish-spearing place).

The meaning of the word Ojibwe is unclear at this point: some would translate it as “he who writes”, referring to the fact that the people kept some of their records written on birchbark scrolls in a pictographic writing system they had developed.

Ojibwe / Chippewa in other languages:

The Ojibwe people traveled from the east coast St. Lawrence River area west around the great lakes to their present locations over a considerable period of time. Legend tells of a search for a place where food grows on the water; that food is Wild Rice and is located in most of the Ojibwe country today.

Odanah (meaning village) was originally located at the confluence of the Bad and White Rivers. The area was originally known as “Gete Gititaaning” meaning “at the old garden”. This area is rich in topsoil due to the flooding of the rivers; this is where the people used to plant their gardens and return in the fall to harvest.

The reservation is over 90% wild land kept in its natural state whenever possible by the tribe. The land base plus almost 200 acres on Madeline Island was set aside for the Bad River Band (then known as the Lapointe Band) in the treaty of 1854.
Land Area:  125,000 acres
Tribal Headquarters:  Odanah, the Ojibwe word for town, is the main village and the seat of government for the tribe. Odanah is located ten miles east of Ashland on U.S. Highway 2.

Charter: Indian Reorganization Act of 1934
Name of Governing Body:  The tribal government was originally the chiefs council which was made up of hereditary chiefs and head men from each clan. They made decisions for the tribe on a consensus basis. Today the governing board is the tribal council.
Number of Council members:  Two Senior Council Members and one Junior Council Member , plus the executive officers.
Dates of Constitutional amendments:
Number of Executive Officers:   Tribal Chairman, Vice Chairman, Secretary, Treasurer

Elections: Elections are held annually with four positions up for election one year and three the following year.

Registered Population Today: Over 7,000 members in the Bad River Band. Collectively, there are 130,000 Ojibwe in United States and 60,000 in Canada. The 190,000 total represents only enrolled Ojibwe and does not include Canadian Métis, many of whom have Ojibwe blood. If these were added, the Ojibwe would be the largest Native American group north of Mexico.

Origins of the Ojibwes: The Ojibwe Peoples are a major component group of the Anishinaabe-speaking peoples, a branch of the Algonquian language family. The Anishinaabe peoples include the Algonquin, Nipissing, Oji-Cree, Odawa and the Potawatomi.

They are a patrilineal society meaning their clan or “dodem” membership is passed down through the father. A person’s clan membership originally denoted what function in society the family and individual would fulfill. The primary clans surviving today are the Crane, Loon, Eagle, Bear, Marten, Lynx, Bullhead, Sucker and Turtle.

The oral tradition of the Ojibwa (Anishinabe, Ojibwa, Potawatomi, Chippewa) tells of the five original clans – Crane, Catfish, Loon, Bear, and Marten – traveling west from the Atlantic Ocean, through the Great Lakes and into what are now Minnesota, Ontario, and Manitoba. See Ojibwa, Chippewa and Potawatomi for a more detailed account of the migration of the bands and clans from the east coast to their present locations.

Their Midewiwin Society is well respected as the keeper of detailed and complex scrolls of events, oral history, songs, maps, memories, stories, geometry, and mathematics.

Buy this Bad River Chippewa Band T-ShirtTraditional Allies: Ottawa and Potawatomi. These three were once all part of the same Ojibwe tribe and are thought to have separated about 1550. For the most part, the Ojibwe were a peaceful nation.  The Chippewa were located well north of the early flow of European settlement, so they rarely had any conflicts with settlers.They were friendly with the white men, and even served as middlemen in trading between French fur traders and the Sioux.

Traditional Enemies: Iroquois Confederacy and the Sioux. The Chippewa took scalps, but as a rule they killed and did not torture, except for very isolated incidents. Like other Great Lakes warriors, there was ritual cannibalism of their dead enemies.

The Dakota Sioux were by far their biggest enemy.  For 130 years, the Ojibwe and Sioux battled contiuously until the Treaty of 1825, when the two tribes were separated.  The Sioux recieved what is now southern Minnesota, while the Chippewas received most of northern Minnesota.

Chippewa Legends / Oral Stories
Anishnaabek (Ojibwe) interpretation of the medicine wheel
Origin of the Midewiwin
Creation of Turtle Mountain
Father of Indian Corn
How Bats Came to Be
How dog came to be
How Rainbows Came to Be
Mother, we will never leave you
Nokomis and the spider: story of the dreamcatcher
Ojibway Creation Story
Ojibway Migration Story
Ojibway Oral Teaching: Wolf and man
The close your eyes dance
The Dreamcatcher Legend
The First Butterflies
Thunderbirds and Fireflies
Why birds go south in winter
Winabojo and the Birch Tree

Arts & Crafts: The Chippewa is best known for birch bark contaniners and intricate beadwork, usually with a floral pattern.

The primary game animals are: deer, bear, rabbit, ruffed grouse, ducks and geese. The primary furbearers are: muskrat, beaver, mink, marten, raccoon, fox and fisher. There are a few moose and wolves on the reservation but these are highly protected due to their rarity. The rivers also provide spawning areas for the many species of fish in the area. The primary species are walleye and northern pike, sucker, trout/salmon, burbot, bass and sturgeon.

Many Chippewa warriors also wore a porcupine roach. In the 1800’s, Chippewa chiefs started wearing long headdresses like the Sioux.

Housing: Domed Wigwams covered with birch bark were the homes of the northern Chippewa. When a family moved, they rolled up the birch bark covering and took it with them, but left the pole frame behind. Plains Chippewa adopted the buffalo hide tipi of the Plains Culture, and took their poles with them when they moved, since trees were hard to find on the open Plains.

Subsistance: Ojibwe people are culturally known as semi-nomadic hunters, fishermen and gatherers. Their migration story says a medicine man had a vision which told him the people should travel until they found an area where food grew on water. That prophesy was fulfilled when they found the wild rice beds growing in what is now Wisconsin, Minnesota, and Michigan.

Not only was rice one of their principal foods in the old days, it is still important today, and also holds spiritual significance for the Chippewa (Ojibwe) people.

The primary employer is tribal government, either in administration of social programs or for profit enterprises like the casino gaming operations.

The original religious society is known as Midewiwin or Grand Medicine. In modern times, the people may belong to the Midewiwin, one or more of the Big Drum societies, or a Christian Sect, primarily Catholic and Methodist.

Sandy Lake Tragedy – The Sandy Lake Tragedy was the culmination of a series of events centered in Sandy Lake, Minnesota, that resulted in the deaths in 1850 of about 400 Lake Superior Chippewa when officials of the Zachary Taylor Administration and Minnesota Territory tried to relocate several bands of the tribe to areas west of the Mississippi River.

The Anishinabe, a long standing alliance that contains the Ojibwe, Potawatomi, and Ottawa, started traveling from the east as early as 1500. Carrying on past eastern states, the Anishinabe explored the southern shores of Lake Superior, finding Manoomin (wild rice) or “the Food that Grows on Water.” Settling in this area and learning to subsist on seasonal resources, Ojibwe bands fished, hunted, gathered food (including wild rice) and tended gardens.

The large island the Ojibwe settled on was renamed “Madeline” by 1792. Contact with french traders brought new tools, materials and weapons, which aided in conflict with the Dakota and Mesquakie. The friendly relationship with French traders sometimes included intermarriage, and the Ojibwe joined their allies to fight against the British in the 1600s. Also in the 1600s, missionaries began visiting La Pointe, leading to religious divisions among the Ojibwe.

These pressures, added to an expanding population and limited resources, caused bands of Ojibwe to leave the area for other parts of the great lakes region.

The Bad River Reservation is 124,655 acres of primarily undeveloped and wilderness land, of which 57,884 acres are in trust.

The Chippewa (also known as the Ojibwe or Anishinabe) Indians of present-day Wisconsin are the descendants of a northern Algonquian people who originally lived in an extensive area mainly north of lakes Superior and Huron. They began migrating across the Great Lakes region long before Europeans arrived. As the European fur trade penetrated into the Great Lakes region, the Chippewa moved from the backwoods and upriver areas and established villages at points of trade.

Soon after the organization of the new territory, a land cession treaty was signed that secured approximately half of the present state of Wisconsin from the Chippewa, Sioux, and Winnebago Indians. Officials sought the land cession to enable lumbering on a large scale along eastern tributaries of the Mississippi River. The land cession treaty of 1837 provided legal access to these lands.

After lumbering began, reports of copper deposits along the shores of Lake Superior led federal officials to push for new land cessions from the Chippewa Indians. Following the treaty of 1842, copper mining boomed and the region led the world in copper production by 1890.

The Treaty of 1854 finalized the ceding of the land south of Lake Superior. The treaty also established reservations for various bands, including Bad River, located on the south shore of Lake Superior and Madeline Island. The influx of white settlers progressively displaced the Chippewa from their traditional use of the ceded lands.

History Of The Ottawa And Chippewa Indians Of Michigan: A Grammar Of Their Language

Explore More about Ottawa and Chippewa Tribes in History