Crazy Bear (Mah-To-Wit-Ko, also known as Foolish Bear, 1785–1856) was an Indian chief of the Assiniboine tribe. He is best known as a skilled negotiator with the American Fur Company at Fort Union, North Dakota; and for his participation and representation at the Fort Laramie Treaty Council of 1851—where he was a signatory of the treaty. END_OF_DOCUMENT_TOKEN_TO_BE_REPLACED

The Legend of Devil’s Tower 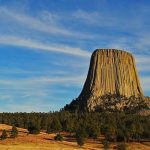 Out of the plains of Wyoming rises Devil’s Tower. It is really a rock, visible for a hundred miles around, an immense cone of basalt which seems to touch the clouds.

Devil’s Tower sticks out of the flat prairie as if someone had pushed it up from underground.

Of course, Devil’s Tower is a white man’s name. We have no devil in our beliefs and got along well all these many centuries without him. You people invented the devil and, as far as I am concerned, you can keep him.  END_OF_DOCUMENT_TOKEN_TO_BE_REPLACED

The Lakota constellations are visible in the winter sky, and they reflect Lakota mythology. A notable aspect of that mythology is that every event and object on earth has a correspondent in the sky. END_OF_DOCUMENT_TOKEN_TO_BE_REPLACED

Create your own reality – A Sioux Legend

The Creator gathered all of creation and said, “I want to hide something from the humans until they are ready for it. It is the realization that they create their own reality.” END_OF_DOCUMENT_TOKEN_TO_BE_REPLACED

William H. Jacobsen Jr. is recognized as the foremost expert on the ancient and complex language of the Washoe tribe that has occupied Carson Valley and surrounding areas for thousands of years. END_OF_DOCUMENT_TOKEN_TO_BE_REPLACED

Zuni Men of the Early Times

Eight years was but four days and four nights when the world was new. It was while such days and nights continued that men were led out, in the night-shine of the World of Seeing.

For even when they saw the great star, they thought it the Sun-father himself, it so burned their eye-balls.

Men and creatures were more alike then than now…

END_OF_DOCUMENT_TOKEN_TO_BE_REPLACED

Coyote and Eagle Steal the Sun and Moon

Back when it was always dark, it was also always summer. One day, Coyote and Eagle went hunting. Coyote was a poor hunter because of the dark.

Eventually, they came to the Kachinas, a powerful people. The Kachinas had the Sun and the Moon in a box.

After the people had gone to sleep the two animals stole the box. At first Eagle carried the box but Coyote convinced his friend to let him carry it.

The curious Coyote soon opened the box and the Sun and Moon escaped and flew up to the sky.

This gave light to the land but it also took away much of the heat, so we now have winter. 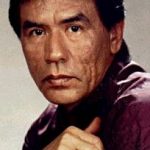 The Navajo police lieutenant from 14 Tony Hillerman novels has been altered for television. But his creator is pleased with what he sees.

Wes Studi, who plays Leaphorn in “Skinwalkers” as the new PBS Mystery  season gets under way Sunday (9 p.m. EST), must share credit for the novelist’s pleasure with director Chris Eyre and writer Jamie Redford, son of Robert Redford (who’s the executive producer).

Instead of the wise, patient and culturally sensitive sleuth of literature, the Leaphorn of the first U.S.set episode of the previously all-British Mystery series is redrawn as a grouchy urban cop who has lost touch with his Navajo roots and returns to the reservation with his ailing wife. END_OF_DOCUMENT_TOKEN_TO_BE_REPLACED

How a White Man Became an Indian

Not so very long ago there was to be found living in the far West a quaint old man. He had seen many moons. His head was almost white from the frosts of some seventy winters. He was a Wyandot Indian, and he lived with his own people.

His house stood among the trees by a clear, swift river in the beautiful hills. At a great city far from his home he had some land. This land was worth much money. Some mean white men were about to take the land away from him. But a kind white man made them pay the Indian what the land was worth. END_OF_DOCUMENT_TOKEN_TO_BE_REPLACED

Wyandotte (Huron) Creation Legend and How the Sun was Made

In the beginning, the people were all Wyandots. They lived in Heaven. Hoo-wah-yooh-wah-neh, The Great Spirit or mighty chief, led them. END_OF_DOCUMENT_TOKEN_TO_BE_REPLACED

Glooscap: Origin of the Medicine Man 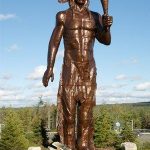 The Medicine Man is Glooscap, the Good-Spirit. Legend has it that the father of Glooscap is a being who lives under a great waterfall beneath the earth.

His face is half-red, and he has a single all- seeing eye. He can give to anyone coming to him the medicine he desires. END_OF_DOCUMENT_TOKEN_TO_BE_REPLACED

For a Cherokee wedding, the bride wears a special style of dress called a “tear dress.” The groom wears a ribbon shirt and black slacks. They both wear moccasins. In lieu of rings, the bride and groom exchange gift baskets. END_OF_DOCUMENT_TOKEN_TO_BE_REPLACED