We must honor the buffalo! We are buffalo people.

Many days passed before the joy of that day settled deeply into my heart and I could move forward to thinking on the realities of the present situation of the buffalo on our People.

The senseless slaughter of 60 million buffalo brought the herds to the point of extinction.There was no reverence held for the sacred, life-giving buffalo. These creatures were nothing more than money in pockets and an insane “sport” to people who shot them for no purpose other than target practice. There was no honor and no thanks given for the taken life and the buffalo were left to rot beneath the sun.

Likewise, the Native people across Turtle Island were treated similarly and millions of them were simply exterminated.

There was no honor and there was no value placed upon the human beings. The remaining Native people were forced out of the way of “progress” and forced onto isolated reservations to live within a confined area. This totally unnatural way of living and the treatment by those who did not or could not understand us reminded me of our treatment of the buffalo. 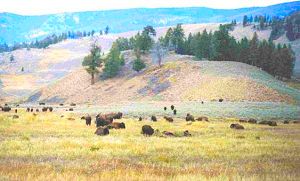 Scott Frazier once told me that in 1906 there were only 20 wild buffalo living in what is now called Yellowstone Park. At this time, several little orphaned buffalo calves were fed on milk by dairy cows that were brought in from commercial ranches. The dairy cows carried the brucellosis virus and “gifted” it to the buffalo calves in Yellowstone.

This little known fact seems eerily similar to the small pox infected blankets being sent into the Piquot nation and others of our People.

The Native people had their children stolen from their arms and their young ones were forced off to boarding schools. Here, the young ones had their hair cut, were forced to wear different clothing, eat different food, speak a foreign language, adopt new stories as their own, walk and live within the confines of square houses and were forced into a new religion.

These things were forced upon the People because the outsiders believed they “knew better and what was RIGHT versus what was WRONG.” Their decisions were based entirely upon their own interpretations of how all things should be connected and what the balance in the world should be without care that the balance within the Native people had remained healthy for hundreds of years prior to their arrival to Turtle Island.

In similar fashion, “wildlife management experts,” in conjunction with political leadership and pressure from the landowners and cattle industry near Yellowstone, have tried to “control” the wild buffalo herd. Many buffalo calves have been stolen away from their mothers at a point in time where they are yet to learn the ways of survival for their first winter season.

These young buffalo calves are removed from their relations who speak their language and stripped of the teachings that they learn from their Elders within the herd. They have ear tags punched into their ears to mark them with foreign names. The young buffalo that feasted on the wild prairie grasses are forced to eat commercial hay that is dumped into their square homes.

They are tested and prodded, experimented on by scientific research officials, and gradually forget their history and they no longer know they are wild buffalo.

Our people were herded into square houses in confined areas with imaginary fences, were forced to eat strange foods, forbidden to honor our ceremonies and culture and learn a new way that others decided was “right.” Our Native people have had their languages banned from use, their food supplies altered, and their stories and ceremonies outlawed The buffalo, just as the Native people, have had their entire natural way of being altered by outside forces.

“It is easy feel connected in a good way when you are in the middle of ceremony and prayer with the buffalo right near you. The challenge comes when you walk away and go back to the lives you lead away from them. Each day we must remember to keep them close and in our prayers. We must hold on to what our ancestors taught us and do our best to walk a good path. We must never forget that the buffalo are our relations and they are sacred.”

I have had the honor of walking beside and learning from Scott Frazier over the past few years. There have been times that I thought I understood all that the buffalo mean to us. Each time I arrive at that point, I learn new aspects to this relationship that reaffirms that I still have so very much to learn.

What has happened to the buffalo and continues to be the state of being for the herd is reflected back onto the People. When we learn to treat the sacred buffalo in the way that they should be, our People too, may see new and better times in their lives. We are connected; the buffalo and the People, and we must never forget to care for one another.

“The way we as a human race might aid our future generations best, is to teach them to honor the sacred. We must look at the horrors we have created and then seek Creators’ direction before moving forward.

Look to the buffalo and see what our future holds. Our human treatment of our fellows, the wild ones and our care given to Earth, will determine our future. There is no part of creation more important than another. The big bear is as important as the tiny spider that makes her web. The buffalo are watching. Are you hearing the message?”