Pray for the Buffalo

In September 2007, there were six devoted people who did not forget the buffalo. Though the day was cold and the sky filled with snow, the journey began into the heart of Yellowstone in search of our beloved buffalo.

Three men and three women began the day amidst the traffic, stopping at gas stations, passing through forest ranger stations and dealing with the congestion of Yellowstone Park visitors to arrive at the place where one of the buffalo herds was gathered.
The road was lined with tourists who snapped pictures and videos of the buffalo gathered in a large meadow and we made our way through the lines of cars to begin our journey to be with the sacred ones.

Marsha Frazier held Dr. Henrietta Mann’s arm as they aided each other on the walk up the rocky slope to where the prayers would begin. John Potter carried the drum; my husband, Bear, and I walked behind and felt the day’s mood change with each step closer to the buffalo.

Scott led us to a small hill near the herd and we all found our place upon the Earth to sit. As I settled into my place on the rocky slope, I remembered another Grandmother telling me long ago that, “The ground is where all things began and it is where all things will return at the end of their circle. When you sit upon the ground you connect to the very beginning and the very end….like the circle in the web the spider makes.” 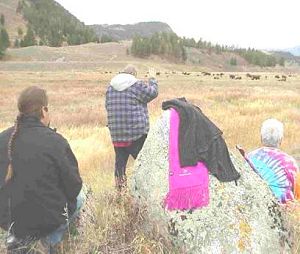 Marsha Frazier, left, walks with Dr. Henrietta
Mann up to the place where the prayers will
take place.

Connection with the Earth and the quiet began to settle around us even though in the distance, traffic noise and tourists went about their way without noticing us at first.

“I don’t know how many years it’s been that I’ve joined Mr. and Mrs. Frazier in prayer and ceremony, with and for the Buffalo. It is always an honor. It’s what we are built for. Time and space fold in upon themselves in the presence of the Sacred. As we settled ourselves among the sage and bunchgrass, just apart from, yet so much a part of, the herd, we easily became centered in prayer with our elders.

The hand-drum came out and we sang a song that was given to us in a fasting time, at a place not far away in distance but so far away in time. The buffalo listened, swayed, rolled on the earth in time, and joined us in song.

To know that some of this herd may take that song with them to their end fills me with a mixture of hope and sadness. But it was a good day, a blessed day, and perhaps they will, in turn, pass our song on to their young and make it their own. For now, though, time is endless as we become the song together – the Fraziers and I, Dr. Mann, Bluejay, Bear and Buffalo. May our songs join our heartbeats together in time and become the song of life – renewed, restored – to oneness. Migwetch, ni bo wah”