Who are the Absentee-Shawnee tribe?

The ancestral homelands of the Shawnees are in the northeastern United States. During the 19th century, the tribe was removed by the U.S. Government to what is now the state of Kansas. The group which became known as the Absentee Shawnee Tribe absented itself from the reservation in Kansas in 1845 (thus their name), and traveled southwards to Texas.

Eventually that band were relocated to Indian Territory ( Oklahoma). The Big Jim Band settled along the Deep Fork River, while the White Turkey band settled in its present site near Shawnee, Oklahoma. In 1886, the U.S. Army forced the Big Jim Band to move once again, this time to the site of its present community in Cleveland County.

During the American Revolutionary War, many Shawnee moved from Ohio to Cape Girardeau, Missouri, then in Spanish Louisiana. They evaded the Northwest Indian Wars that followed the revolution. These Shawnee were later joined by others from Alabama and Ohio. 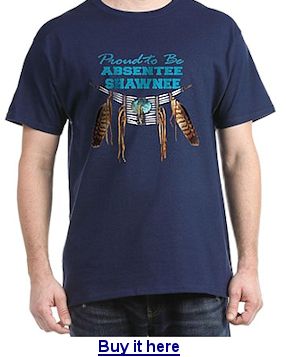 Moving southward, they settled in present-day Arkansas, Texas, and Louisiana. After the United States made the Louisiana Purchase in 1803, relations began to change. In 1825 the US offered the tribe a reservation in the Kansas territory in exchange for the lands they occupied.

Instead, by 1840 many of those scattered groups had migrated to the Indian Territory (in present Oklahoma), and dwelled along the Canadian River in the Choctaw and Creek nations. An 1854 treaty failed to lure them to Kansas with the promise of allotments.

Before the Civil War erupted, Kansas Shawnee with Southern sympathies joined the Absentee on the Canadian. Other Absentee from Texas settled on the Wichita-Caddo reservation. Some served in the Confederate army during the war, but most lived as refugees in Kansas. Afterward, joined by many Kansas Shawnee (Black Bob’s band), they returned to Indian Territory and claimed acreage assigned the Potawatomi.

Being absent from their Kansas reservation, they became collectively known as the “Absentee Shawnee.”

An 1872 congressional act gave title of that land to the Absentee Shawnee. The tribe then consisted of two groups, the followers of White Turkey, who favored assimilation, and those of Big Jim, who opposed absorption into white society for fear of losing their cultural traditions. The Absentee Shawnee lands were allotted in 1890 and 1891.

The Absentee Shawnee Tribe of Indians of Oklahoma was organized under the Oklahoma Indian Welfare Act of 1936.

The lands belonging to the Absentee Shawnee and other Oklahoma Indian tribes are trust lands, not reservations. Individual Absentee Shawnee lands are called allotments. Many Oklahoma Indians call their homelands a reservation anyway. There are some legal differences between these kinds of lands. Tribes who have reservation lands collectively use the lands for the benefit of the whole tribe, like a country. However, they are overseen by the BIA, which must give them permission for some uses of the land, and other major decisions are made by all the people through their representatives on the Tribal Council.

Allotments are small parcels of lands that were deeded to the head of a particular Absentee-Shawnee family. Once all the Absentee Shawnee families had their parcel of land, the excess land was sold to mostly white settlers, and the reservation was dissolved. These family parcels, called allotments, can be bought and sold like any privately owned lands. Some tribal members sold their allotments. In families who kept their allotments, the lands are divided between subsequent heirs when the original owner dies. Over several generations with many descendants, individual allotment owners may now own just a few feet, or even inches of land, complicating future use of the land, since all heirs must agree on it’s use or subsequent sale.

The Absentee-Shawnee banner and logo feature Tecumseh, a Shawnee warrior and visionary leader, who worked to unite tribes in a common homeland. The LI-SI-WI-NWI in the logo means “Among the Shawnee.”

Meaning of Traditional Name: Shawano (now: shaawanwa) is generally understood to mean “south” or “southern people.” However, the stem shaawa- does not mean “south” in Shawnee. It literally means “moderate, warm (of weather).” They were the most southerly people of this Algonquin tribe.

Kispoko means “directly descended from Tecumseh’s line.” Many Absentee Shawnee identify their family roots as Kispoko. Others, such as the Yuchi families, assimulated into the Absentee Shawnee bands at a later date after their own tribes were all but wiped out by diseases and warfare.

Meaning of Common Name: Being absent from their Kansas reservation, they became collectively known as the “Absentee Shawnee” because they were absent from where the US Government said they should be.

Registered Population Today: Approximately 3,400 as of 2010

Shawnee verbs have many complicated parts, and the language is said to have a song-like quality.

The Shawnee language is considered an endangered language, with only about 200 remaining fluent speakers as of 2002, most of whom are elderly adults.

Teaching of the Shawnee language outside of the home is limited; apart from a Shawnee dictionary

and portions of the Bible from 1842-1929, there is little literature or technology support for the Shawnee language.

Origins: The Shawnee considered the Delaware as their “grandfathers” and the source of all Algonquin tribes. They also shared an oral tradition with the Kickapoo that they were once members of the same tribe. Identical language supports this oral history, and since the Kickapoo are known to have originally lived in northeast Ohio prior to contact, it can safely be presumed that the Shawnee name of “southerner” means they lived somewhere immediately south of the Kickapoo. However, the exact location is uncertain, since the Iroquois forced both tribes to abandon the area before contact.

Traditional Allies: The closest allies of the Shawnee were the Kickapoo and Delaware. Further to the south, the most important neighbors of the Shawnee tribe were the Cherokee, Chickasaw, and Creek Indians. Sometimes the Shawnees traded with these tribes, and other times they fought them.

Traditional Enemies: They always considered the Iroquois to be enemies.

Bloodlines are patriarchial, meaning they are traced through the father’s lines.

In the past, each Shawnee village or band was governed by its own chief and tribal council. The Shawnees also had war chiefs, who were chosen by other warriors based on their bravery and military skill. But all of them owed allegiance to one main principal chief.

Crafts / Musical Instruments: The Shawnee tribe is known for their beadwork, pottery, and wood carving. Like other eastern American Indians, the Shawnee also crafted wampum out of white and purple shell beads. Wampum beads were traded as a kind of currency, but they were more culturally important as an art material. The designs and pictures on wampum belts often told a story or represented a person’s family. Musical instruments included drums and deer-hoof rattles. The Shawnees made dugout canoes by hollowing out large trees.

Clothing: Shawnee women wore skirts with leggings. Shawnee men wore breechclouts and leggings. Shirts were not necessary for either sex in the Shawnee culture, but both men and women often wore ponchos in cool weather. The Shawnees wore moccasins on their feet. As they migrated from place to place, the Shawnees adopted clothing styles from many other Indian tribes and from white settlers.

The Shawnees didn’t wear full headdresses like the Sioux. Sometimes they wore a beaded headband with a feather or two in it. Shawnee people usually wore their hair long, though Shawnee warriors sometimes shaved their heads in the Mohawk style. Many Shawnees painted designs onto their faces, and some wore tribal tattoos.

Housing: Summertime living quarters consisted of large villages of bark-covered long houses, with a larger community council house. In the fall, extended families disbursed into smaller hunting camps. Then they lived in small round dwellings called wikkums, or wigwams.

Subsistance: Men were warriors who hunted and fished. Corn and squash fields were cared for by the women. Shawnee women also did child care, cooking and most daily chores like sewing, gathering firewood and packing water. Women carried their children in cradleboards on their back while they worked.

Both genders took part in storytelling, artwork, music, and traditional medicine. In the past, Shawnee principal chiefs were always men, but either a man or a woman could be a village chief.

Before Europeans brought horses back to North America, the Shawnee used dogs as pack animals.

The Absentee Shawnee own a gas station, two smoke shops, a casino, and the AST Country Kitchen Restaurant, located in Norman, Oklahoma. Their casino, Thunderbird Casino, is located east of Norman, Oklahoma and includes the Rednecks Cafe, the Chuck Wagon Snack Bar, and the Jockey Club.

During the 19th century, the Shawnee tribe was removed by the U.S. Government to what is now the state of Kansas. The group which became known as the Absentee Shawnee Tribe absented itself from the reservation in Kansas in 1845 (thus their name), and traveled southwards to Texas.

Eventually they were relocated to Indian Territory (Oklahoma). The Big Jim Band settled along the Deep Fork River, while the other band settled in its present site near Shawnee, Oklahoma.

In 1886, the U.S. Army forced the Big Jim Band to move once again, this time to the site of its present community in Cleveland County. In 1936, the tribe was officially reorganized and gained federal recognition. Today, they are one of three federally recognized tribes of Shawnee people in Oklahoma.

The Source: A Guidebook Of American Genealogy (Third Edition)

– Intended as a handbook and a guide to selecting, locating, and using appropriate primary and secondary sources, The Source also functions as an instructional tool for novice genealogists and a refresher course for experienced researchers. More than 30 experts in this field–genealogists, historians, librarians, and archivists–prepared the 20 signed chapters, which are well written, easy to read, and include many helpful hints for getting the most out of whatever information is acquired.

Denny’s Vocabulary of Shawnee: From the Journal of Ebenezer Denny (American Language Reprints)

Civilization and the Story of the Absentee Shawnees (The Civilization of the American Indian ; [v. 13])

– The author interviewed Thomas Wildcat Alford, the grandson of Tecumseh, for this book. He told what he felt and thought, as he was given the opportunity to leave his tribal home and attend an American school. He was the first one of his family to do so. This book gives the reader his perspective of his story, and it is well written, so that you understand his time in history.