The Raccoon had been asleep all day in the snug hollow of a tree. The dusk was coming on when he awoke, stretched himself once or twice, and jumping down from the top of the tall, dead stump in which he made his home, set out to look for his supper. 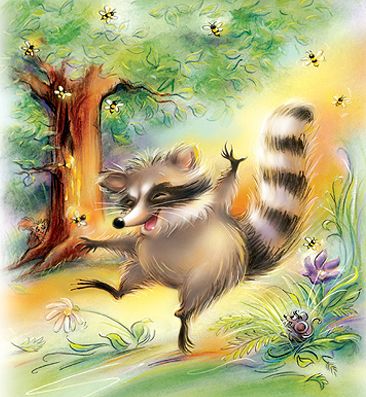 In the midst of the woods there was a lake, and all along the lake shore there rang out the alarm cries of the water people as the Raccoon came nearer and nearer.

First the Swan gave a scream of warning. The Crane repeated the cry, and from the very middle of the lake the Loon, swimming low, took it up and echoed it back over the still water.

The Raccoon sped merrily on, and finding no unwary bird that he could seize he picked up a few mussel-shells from the beach, cracked them neatly and ate the sweet meat.

A little further on, as he was leaping hither and thither through the long, tangled meadow grass, he landed with all four feet on a family of Skunks—father, mother and twelve little ones, who were curled up sound asleep in a oft bed of broken dry grass.

“Huh!” exclaimed the father Skunk. “What do you mean by this, eh?” And he stood looking at him defiantly.

“Oh, excuse me, excuse me,” begged the Raccoon. “I am very sorry. I did not mean to do it! I was just running along and I did not see you at all.”

“Better be careful where you step next time,” grumbled the Skunk, and the Raccoon was glad to hurry on.

Running up a tall tree he came upon two red Squirrels in one nest, but before he could get his paws upon one of them they were scolding angrily from the topmost branch.

“Come down, friends!” called the Raccoon. “What are you doing up there? Why, I wouldn’t harm you for anything!”

“Ugh, you can’t fool us,” chattered the Squirrels, and the Raccoon went on.

Deep in the woods, at last, he found a great hollow tree which attracted him by a peculiar sweet smell. He sniffed and sniffed, and went round and round till he saw something trickling down a narrow crevice. He tasted it and it was deliciously sweet.

He ran up the tree and down again, and at last found an opening into which he could thrust his paw. He brought it out covered with honey!

Now the Raccoon was happy. He ate and scooped, and scooped and ate the golden, trickling honey with both forepaws till his pretty, pointed face was daubed all over.

Suddenly he tried to get a paw into his ear. Something hurt him terribly just then, and the next minute his sensitive nose was frightfully stung. He rubbed his face with both sticky paws. The sharp stings came thicker and faster, and he wildly clawed the air. At last he forgot to hold on to the branch any longer, and with a screech he tumbled to the ground.

There he rolled and rolled on the dead leaves till he was covered with leaves from head to foot, for they stuck to his fine, sticky fur, and most of all they covered his eyes and his striped face. Mad with fright and pain he dashed through the forest calling to some one of his own kind to come to his aid.

The moon was now bright, and many of the woods people were abroad. A second Raccoon heard the call and went to meet it. But when he saw a frightful object plastered with dry leaves racing madly toward him he turned and ran for his life, for he did not know what this thing might be.

The Raccoon who had been stealing the honey ran after him as fast as he could, hoping to overtake and beg the other to help him get rid of his leaves.

So they ran and they ran out of the woods on to the shining white beach around the lake. Here a Fox met them, but after one look at the queer object which was chasing the frightened Raccoon he too turned and ran at his best speed.

Presently a young Bear came loping out of the wood and sat up on his haunches to see them go by. But when he got a good look at the Raccoon who was plastered with dead leaves, he scrambled up a tree to be out of the way.

By this time the poor Raccoon was so frantic that he scarcely knew what he was doing. He ran up the tree after the Bear and got hold of his tail.

“Woo, woo!” snarled the Bear, and the accoon let go. He was tired out and dreadfully ashamed. He did now what he ought to have done at the very first—he jumped into the lake and washed off most of the leaves. Then he got back to his hollow tree and curled himself up and licked and licked his soft fur till he had licked himself clean, and then he went to sleep.