Geraldine Keams (now known as just Geri) is a full blood Navajo (Dineh) storyteller, actress, and author who got her first acting break in The Outlaw Josey Wales.

Geraldine Keams was born and raised in the Painted Desert of Arizona. Her Mother’s Clan is the Streak-of-Black-Forest (Tsi’nijinnie), She is born for the Manygoats Clan (Tl’iizi’ – Ll’annii). 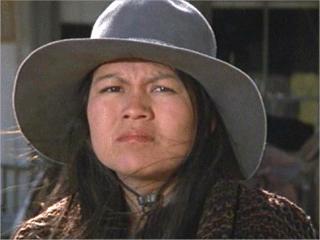 She grew up without television, living on the Navajo reservation with 9 brothers and sisters. She attended boarding schools on and near the reservation in northern Arizona. Her grandmother, a rugweaver and storyteller, inspired Geri to remember the stories and culture of her people.

Geri graduated from the University of Arizona with a degree in Drama and Film. She continued her studies in New York City in the seventies and toured with the Native American Theatre Ensemble (NATE) and co-wrote “Nahaaszan”, a stylized production about the Navajo origin story.

She is considered the first Native American woman to write and produce a stage play. It was called “The Flight of The Army Worm.” Her plays have been published in numerous anthologies throughout the world.

Geri is best known as an accomplished film actress. She co-starred with Clint Eastwood in the classic western, “The Outlaw Josey Wales” (1976), playing Moonlight. She has co-starred in many films over the years such as “The Car” (1978) with James Brolin, and “Walks Far Woman” (1987), with Raquel Welch. She has been featured in many television productions such as, “Twin Peaks” (1995) and playing Ed’s aunt in “Northern Exposure” (1998).

Ms Keams served as a consultant on the Disney animated feature, “Pocahontas”, and Tony Hillerman’s “Skinwalkers” for PBS. In more recent years she has co-starred in many television productions such as the Disney Channel’s, “Buffalo Dreams” (2006), Showtime Cable’s, “Edge of America”(2005) and “Comanche Moon”(2007) for CBS and Hallmark Entertainment. 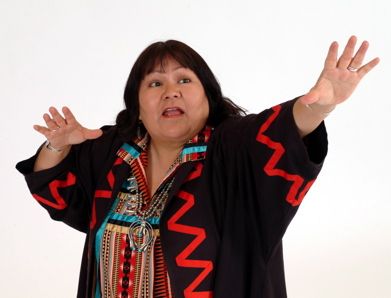 Geri has toured the world with her children’s show, “Native Legends Come Alive.” She has been featured at The John F. Kennedy Center for the Performing Arts and The Smithsonian Institute in Washington D.C., The National Storytelling Festival in Jonesborough, Tennessee, and is a resident performing and workshop artist for the The Los Angeles Music Center.

She has performed and conducted workshops in hundreds of schools, libraries, churches and museums throughout the country.

Geri believes in promoting the accurate and authentic view of her people and works hard in making sure that each project she is involved in reflects the true spirit and voice of her people.