The story of the Jingle Dress Dance begins in Whitefish Bay, a reserve village located on the shores of Lake of the Woods in southwestern Ontario. Small and isolated, it is a Native community where traditional values and sensibilities still flourish. 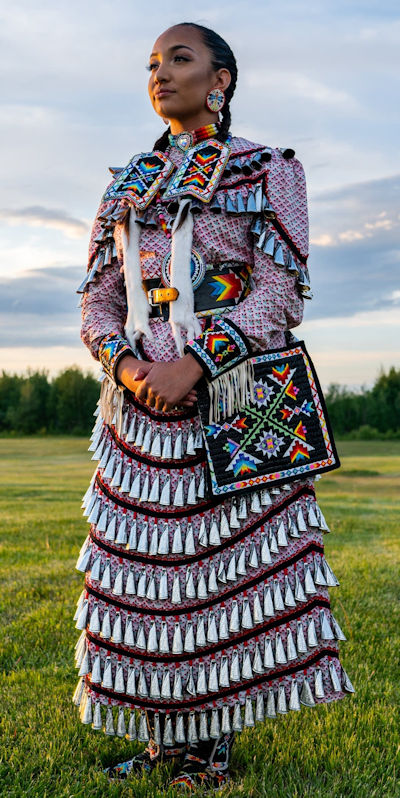 One of these concepts is that specific kinds of knowledge can be brought into the community through the medium of a dream or vision.

Closely tied to this notion is the idea that what the Creator or guardian spirit gives to an individual though a vision is a complete understanding of what they have experienced; there is no need for experimentation or further hypothesis.

Older oral narratives, such as that of Crow-Feather (the Pawnee warrior honored by being given the Iruska knowledge in a vision), commonly tell of this experience.

Women in North America have a long history of attaching objects to their clothing in order to make pleasing rhythmic sounds while they danced.

In pre-European times, these “jingles” were commonly made from shells, animal teeth, or bone; in the Great Lakes area, women used pieces of hammered copper, a resource abundant in that region.

According to photographic evidence from the latter part of the 1800s, Ojibwe women wore decorative sashes trimmed with metal cones, most likely made from scraps of tin cans. Until around 1918 or 1920, however, no specific dance calling for metal cones as part of its regalia existed in Anishnaabeg communities.

Just as the Iruska had its origin in a vision, so, too, did the Jingle Dress Dance. There are many other accounts of how the Jingle Dance began.

The most common Great Lakes-area story of her experience is that the Jingle dress and dance were given to the Anishnaabeg sometime soon after the end of World War I through the medium of White’s father’s vision, which he sought when she was ill.

The young girl was sick and gave no signs of recovering, so her father sought a vision. In that vision he was shown how to make a dress and perform a healing dance. He set about making the dress and then put it on his daughter and instructed her in the dance. In spite of her illness, she somehow was able to dance, and when she did she was miraculously cured.

Afterward, the same girl sought out three other girls and directed each to make a dress in one of the four sacred colors (red, yellow, white, and blue), with four rows of jingles rolled from snuff cans. The girl was Maggie White, and she and the other three girls became the nucleus of the Jingle Dress Dance Society.

The rules of the society were drawn from traditional Ojibwe women’s values and concepts of the role of women as caretakers of the family and supporters of men, who in pre-reservation times protected the family from harm. A young woman who wished to join the society was to be of good moral character and a role model of proper behavior.

In the year preceding her initiation she was put on a “berry fast” by an older woman and not allowed to eat berries for that year. The fast represented sacrifice and self-discipline.

Each day during the fasting year she was to attach one cone to her dress and say a prayer. At the end of the year she was inducted into the Jingle Dress Society and taught the dance.

In the Jingle Dance, one foot is never to leave the ground, so the dancer always remains connected to the earth. The society still functions in this same manner, and the dance continues to be performed as prayer of healing.

During the half-century following Maggie White’s first rendition, the Jingle Dress Dance was limited to the confines of Ojibwe Country and rarely seen other than at pow-wows in those areas.

Performed at traditional pow-wows, it subsumed the earlier Women’s (Kwe) Dance, taking its shuffle footwork and adding it to the repertoire of the Jingle Dance as a second distinct style. That gives the Jingle Dress Dance two dissimilar footwork styles, “straight” and “round” (also called “side-step,” or “shuffle”).

Women’s Northern Traditional has a similar side-step style, but the tempo and beat pattern of the music for the Jingle Round Dance is unique and unrelated to any other genre of pow-wow song. If an Anishnaabeg Drum can be found, it is rare for one that is not Anishnaabeg to be invited to sing one of these songs. Most Drums, however, can sing the Traditional or straight songs that accompany the more common straight style of the jingle dance.

Not until the late 1960s and early 1970s did the Jingle Dress Dance begin to be seen frequently outside Ojibwe Country. Initially, the only women performing it were Anishnaabeg, but as time went on Northern and Southern Plains women developed an interest in the dance and started to learn it.

Because they were not a part of the Anishnaabeg dance tradition, many of these women assembled non-standard dance outfits that had fewer than the required 365 cones and beaded yokes borrowed from Fancy Dance regalia.

At the grand entry of some western pow-wows, Jingle Dress dancers enter the arena after Fancy dancers, a sign the dance is not accorded the same respect as it is given in Anishnaabeg regions. In addition, footwork in the western states is far different than the careful Anishnaabeg “Woodland” style. Many Plains dancers incorporate spins and lifts reminiscent of the Fancy Dance.

During “honor beats” of the drum, women dancers salute the drum with their fans, referred to as “catching the spirit of the drum.”

According to pow-wow scuttlebutt, the popularity of Jingle Dress dancing outside traditional Ojibwe communities has caused concern among members of the dance society at Whitefish Bay.

On one hand, many consider the dance to be a gift from the Ojibwe to the larger Native North American community. On the other hand, however, the regalia of many women is far beyond that deemed proper, and skin-tight dresses, metallic glitter fabrics, and lace sleeves are coming into vogue.