In Anishinaabe culture, a Manitou named Pukawiss, brother of Nanabozho, and born to live amongst the people, created the hoop dance. 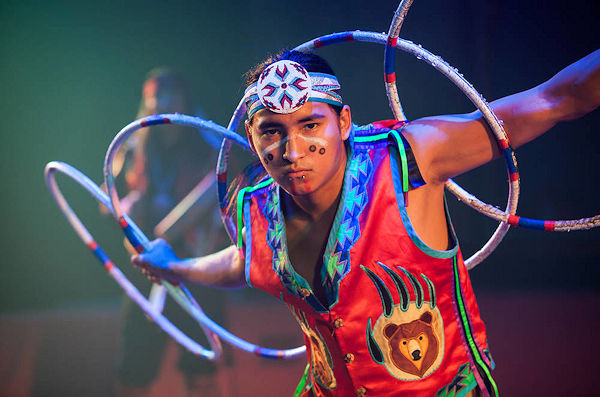 Unlike the other boys, Pukawiss did not show an interest in running, swimming or hunting. He only wanted to watch the animals. His fascination with impractical things drove his father’s interest away from him towards his brother Maudjee-kawiss therefore leading to everyone calling him Pukawiss: the disowned or unwanted.

Pukawiss learned so much about life in the movements of eagles, bears, snakes that taking their life would have been wrong. The animals had much to teach the humans about values and relationship like loyalty, kindness and friendship.

Pukawiss taught his village about the animals by spinning like an eagle in flight or hopping through grass like rabbits or bouncing like a baby deer. He became a dancer. So many villages wanted him to teach them about the ways of the animals that he had to give up his home and became a permanent visitor.

Many women wanted him to settle with them in their village but he preferred to keep moving.

Pukawiss and his brother Cheeby-aub-oozoo added drums and flute to the dance. Later, Pukawiss added the stories of humankind to his performances. He invented the hoop dance to help him with this goal.

The dancer became a counsellor with the hoops representing a circle that returns each problem back to the responsibility of its creator. According to Basil Johnston,”the hoop is also emblematic of the way things are, in that mischief breeds mischief that eventually returns to haunt and plague the inventor.”

Eventually many became jealous of Pukawiss – his fancy dress, and his skill with the hoops so they copied him. Like his father, his brother Maudjee-kawiss did not understand his artistic ways and sought to scold him. Pukawiss often provoked his audience by teasing them.

As an older brother, he teased his other brothers perhaps once too often. Insulted by a Pukawiss prank involving the theft of his prize pigeons, Nanabozho angrily razed the mountain under which Pukawiss had been hiding camouflaged as a snake. Pukawiss wasn’t dead but now he had a new job: to taunt those who are too proud. The Anishinaabe believe that we see him each time the wind teases the leaves and soil to dance.

The Hoop Dance incorporates from 1 to 30 hoops that are 1 to 2.5 feet in diameter. About 6-12 hoops are the most common, but the number used depends on the dancer’s skill. The hoops are used to create and incorporate both static and dynamic shapes, or formations, representing various animals, symbols, and storytelling elements into the dance.

During the dance, shapes are formed from the hoops in storytelling ritual such as the butterfly, the eagle, the snake, and the coyote, with the hoop symbolizing the never-ending circle of life. The hoop dancer focuses on very rapid moves, which are still in time to the beat of the drum, while creating hoop formations around and about the body.

In elaborate sequences of moves, the hoops are made to interlock in such a way they can be extended from the body of the dancer to form appendages such as wings and tails or removed from the body enmasse to form globes and other shapes.

In modern pow wows, the Hoop Dance has become a competition dance usually performed as a Special by one dancer or a few dancers. However, there are a few Hoop Dance competitions where large numbers of dancers compete for prizes and championship titles.

The most popular competition occurs annually at the Heard Museum in Phoenix, Arizona. Up to 80 dancers have participated on any given year,and the competitions have drawn as many as 10,000 spectators.

The venue was moved to the Heard Museum in Arizona for the second event and the first adult winner of what was to become the permanent venue was Quentin Pipestem of the Tsuu T’ina Nation in Alberta, Canada.

The hoop dance is part of the pan-Indian movement and as such has evolved over the years by becoming faster and incorporating many influences from outside traditional culture, such as the use of moves from hip hop dance, as well as the widespread use of industrial piping to construct hoops that were originally made from reeds or willow branches.

Hoop dance has gained a strong following internationally as an increasing number of hoop dancers tour the world.

Although originally a male-only dance form, in recent years women have become active participants in the hoop dance and in hoop dance competitions. In 1994, Jackie Bird (Mandan, Hidatsa and Santee Sioux, from South Dakota) became the first woman to compete in the Hoop Dance World Championships.