Crow Fair Tipi encampment area has been used for generations.

Crow Fair starts in earnest today as the first of two parades winds through town and into the encampment of more than 1,000 tepees. 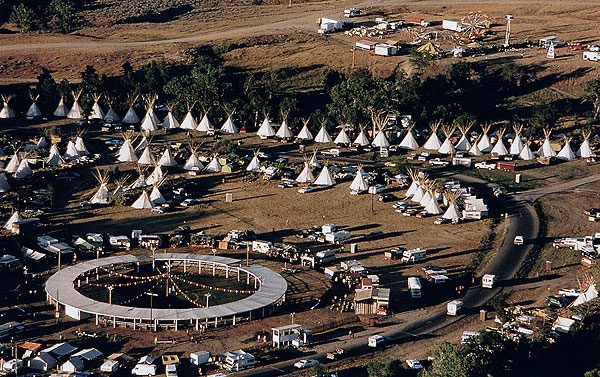 “There’s more enthusiasm about this year’s Crow Fair,” tribal spokesman Donald Stewart said. “Many have been moving in early. We’ve seen a lot of growth, people being more interested in their culture.”

Many tribal families have camped in the same spots for generations. The camps appear Spartan, similar to those their ancestors would have set up during the tribe’s nomadic years, but are also elaborate with rows of coolers and chairs and a mix of arbor styles, some draped in modern tarps and mosquito net and others traditionally made with woven branches.

Crow Fair is like a family reunion in which many of the tribe’s nearly 12,000 members come together. It is reminiscent of when various bands and clans would gather during the year, Stewart said.

“Visiting family and renewing their relations, that’s the concept of Crow Fair,” he said. “Now, people come from near and far, it’s really a big part of the Crow way of life.”

Crow Fair began more than a century ago

The Crow Fair event was begun more than a century ago by an Indian agent. However, this is the 89th annual Crow Fair in the current location that has morphed into today’s celebration, held the third weekend of August every year, with competitive drumming, dancing, a rodeo, parades, and horse racing.

For visitors, the bulk of the action at Crow Fair is in the dance arbor in the center of the encampment. People also line the streets of Crow Agency to watch the morning parade wind through town each morning.

With grand entries in the afternoons and on Friday and Saturday evenings, Crow members and dancers from other tribes outfit themselves in traditional regalia and dance in competitions which are divided by dance styles, ages and men’s, women’s, and children’s categories. The youngest dancers, many of whom are barely walking by themselves, are called “tiny tots,” and are a favorite of the spectators.

Many events make up the Crow Fair Celebration

There are a variety of traditional and contemporary events during Crow Fair, including a basketball tournament. The tourney will be in the new youth sports complex that has been built on the hill behind the encampment. The complex includes four basketball courts and a variety of jumps for skateboarders.

One of the new events at Crow Fair this year is a Meth Free Crow Coalition concert and fireworks show. The concert features national Christian hip-hop entertainers and local musicians. The group also planned to host a youth dance during the weekend and enter floats in the parades.

Organizing and funding the prizes for Crow Fair is the responsibility of a volunteer board that is elected just after Crow Fair each year.

A number of girls are selected each year as Crow Fair royalty.

No alcohol or drugs allowed

Stewart said tribal law, and the Venne administration’s policy of zero tolerance for any drugs, will be enforced.

“Law enforcement will be out in full force,” Stewart said.

The tribe’s game and fish staff also will patrol and enforce the fire restrictions in effect on the reservation, which include no open flames or campfires.

The Crow Tribal Court is offering a “Crow Fair Special” of a $50 fine or bond for minor offenses, including disorderly conduct, possession of intoxicants, public nuisance and criminal trespass, according to a public notice printed in the tribal newspaper.

Matt Pryor, special agent in charge of Bureau of Indian Affairs law enforcement in Montana, said about 30 officers and agents will patrol Crow Fair. The number includes members of the Crow Police Department and BIA employees brought in from other areas.

Patrols were increased and an outdoor detention facility for Crow Fair was developed several years ago because of burgeoning crime during the events. Arrests have decreased the last few years in response, and law enforcement has streamlined its operations, Pryor said.

“Every year we get better and better at Crow Fair in the services we are able to provide,” Pryor said.

Editors Note: You can read my review of Crow Fair here, which I have attended many times.

Becky Shay is a staff reporter for the Billings Gazette. Contact Becky at [email protected] or 657-1231.