The Crow Fair Pow Wow and All Indian Rodeo is held the 3rd weekend in August at Crow Agency, Montana. Roughly 50,000 people attend this event, which is open to the public. More than 1,000 tipis are set up on the grounds, plus hundreds more modern tents, campers, and RVs.

If you only attend one pow wow in your lifetime, Crow Fair at Crow Agency, Montana is the one I would recommend. Crow Fair is always held the third weekend of August. Many families have been setting up their lodges in the same location for generations. Other spaces are on a first-come-first-served basis.

Visitors begin arriving as early as Wednesday or Thursday, although the Pow Wow dancing doesn’t officially begin until Friday. Various ceremonies are held on Wednesday and Thursday before the pow wow, and tribal elections are held on the Monday following the pow wow.

There are daily parades, a foot race, an all Indian rodeo, and horse racing also going on during this event.

This article also contains information about the Battle of the Little Bighorn reinactment at Hardin, Montana during the fourth weekend in June.

You will also find travel and dining information for the Billings, MT area.

Billings, Montana is the largest “city” in the State of Montana.

Boasting a population of less than 100,000, it nevertheless retains the feel of a small country town while offering the conveniences of a metropolitan area.

During any major yearly festival or event within a hundred miles of Billings, you will not find a motel room unless you have booked several months to a year in advance, because many people choose to make Billings their jumping off point for day trips.

In Billings you will find dining options from fast food joints to regional delicacies, to gourmet fine dining. There are several major motel chains, many quaint Bed & Breakfast Hostels, private RV campgrounds and State and National Park Campgrounds in the area.

I would NOT recommend the Billings Motel-6 if you travel with pets. I have two large dogs and a wolfdog and stay at Motel-6’s frequently across the US, since they are one of the few motels who have a national policy of allowing pets.

I had stayed in the Billings Motel-6 at least once or twice a year for eight years with my animals with no problems.

However, last year they acquired a new manager and did some redecorating, and for the first time anywhere in the nation, Motel-6 refused to rent me a room with pets, even though they had accepted my reservation a year in advance and were aware I had pets at the time the reservation was made.

My animals have never caused a problem at this motel, and I have a policy of always leaving a generous tip for motel maids to compensate for any extra vacuuming they may have to do because of my pets.

Since this was during a major festival, I could not get a room elsewhere and was greatly inconvenienced by this decision.

Billings is within a days drive of three National Parks: Yellowstone, Glacier and Grand Teton.

You will see some of the most awesome scenery, wildlife, and natural wonders in the country in these parks.

Some of the wildlife you may be lucky enough to see up close include buffalo, wolves, elk, deer, antelope, and bears.

Montana is nicknamed the Big Sky Country with good reason, the horizon seems to go on forever, broken only by white billowy clouds and majestic snowcapped mountain peaks.

Some of the cultural things to see and do in the Billings area include the Alberta Blair Theatre for the Performing Arts, The Billings Symphony Orchestra and Chorale, Yellowstone Art Museum, Western Heritage Center, Zoo Montana, and the MetraPark and Yellowstone Exhibition Center.

My trips to Billings are for two of the historical celebrations in the area. About sixty miles from Billings is the Little Bighorn National Monument and Cemetery.

In the nearby town of Hardin, there is a reenactment of this famous battle every year during the fourth weekend of June sponsored by the area Chamber of Commerce.

The script for the reenactment was written by Joe Medicine Crow, who is official historian for the Crow tribe and gives the non-Indian viewer a new perspective on this bit of history.

The reenactment is presented from the Indian viewpoint and starts with the coming of the first white men (Lewis and Clark) and proceeds up through the famous battle where Custer met his demise.

The presentation is historically accurate and is popular with the tourist crowds. It has the feel of being present during the filming of a movie (and has been filmed by national news shows such as 20-20) while retaining an important part of western US history.

There are food and craft booths also available on the reenactment grounds, and primitive bathroom facilities. The presentation lasts about two hours and is presented once on Friday afternoon, twice on Saturday and once on Sunday.

There is another reenactment put on by the Real Birds, who are decendants of people who actually fought in this battle. Their reinactment is held on the actual ground the battle occurred on, and lasts about the same amount of time as the original battle–about 10 minutes.

Eight miles farther up the road you will find the annual Crow Fair during the third weekend of August.

This pow wow has been held in the same place for over a hundred years and is a real traditional pow wow. If you only attend one pow wow in your lifetime, this is the one I would recommend.

The campers attending the pow wow start coming in the week before the pow wow begins. By the time it starts there will be more than one thousand teepees and another 6,000 or so tent and RV campers.

The Wednesday preceding the pow wow is the official camp day when campers start coming in in droves. Wednesday evening and all day Thursday traditional ceremonies are performed. The pow wow dancing begins on Friday and runs through Sunday. Monday tribal elections are held after most of the tourists have left.

The teepees will stretch out over several miles, giving this pow wow celebration the title of “Tipi Capital of the World.”

At the same time, there is an All Indian Rodeo nearby in the town of Crow Agency, Montana, which is the town where the pow wow is also held.

The Little Bighorn Battlefield Monument and cemetary is about two miles up the road.

What to expect during the actual Crow Fair

Each morning a Camp Crier will ride through the camps waking the campers with his cries to get up in the Crow tongue.

About ten o’clock a parade will form of horsemen, dancers, kids on decorated bikes, an occasional politician, and visiting royalty on cars or heavily decorated horses. Dancers who participate in the parade are all dressed in their dance outfits and the procession will wind its way through the whole camp and pow wow grounds area. There might even be a float or two.

After the parade there may be some giveaways or other native ceremonies going on in the dance arena. This is also a time many tourists use to visit the vendors who have booths set up to sell their Native American crafts.

Food stands abound selling everything from the usual hamburgers and hot-dogs to Chinese food to traditional Indian dishes. Indian frybread tacos are always a favorite.

At 1:00 p.m. is the first Grand Entry where all the dancers from all the categories enter the arena at once for a special dance to officially start off the day’s ceremonies.

There will be a second grand entry in the evening about 7:00 after a dinner break of an hour or two. Otherwise, the dancing will go nonstop until the wee hours of the morning, sometimes until 3:00 or 4:00 am.

Then the next day it starts all over again with the same schedule. There are so many dancers at this pow wow that the grand entry usually has to go through twice because not everyone will fit in the large arena at one time.

The All Indian Rodeo 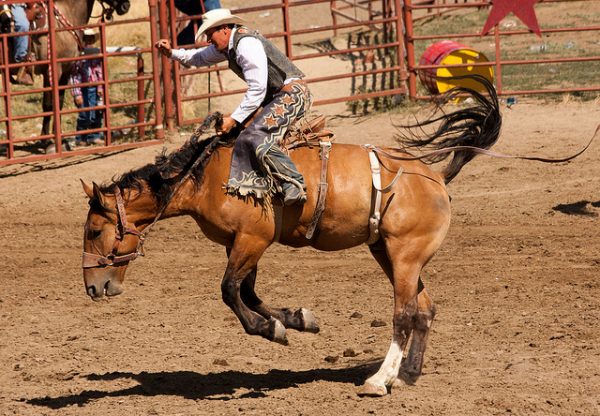 At the same time the pow wow dancing is going on, there is a three day All Indian Rodeo in the town on Friday, Saturday, and Sunday. This is the largest outdoor pow wow in the world and the locals call themselves the Teepee Capital of the World. There are easily over 1,000 tipis in the encampment at this powwow.

At the same time the dancing is going on, there are also Indian gambling games such as the Hand Games Tournaments, or Stick Games as they are known to some, as well as other activities such as Blackjack and other card games.

The Weather in Montana

They have a local saying in Montana that goes something like, “The wind doesn’t always blow like this, sometimes it comes from the other direction.”

The best time to visit any part of Montana is July and August, unless you like the snow and cold, or are into hunting or skiing, in which case you would find something to do in Montana any time of year.

My brother who lives in Montana likes to joke that they have two seasons–two months of summer and ten months of winter.

I have personally seen snow arrive on the fourth of July and stick on one occasion. There are many mountains in the area which have snow on their peaks year round.