Before European contact, native Californians spoke over 300 dialects of approximately one hundred distinct languages. All but sixty-four are extinct today, with many more languages likely to disappear in our lifetime.

There are seven native language family groups represented in California.

The Algic branch of the Algonquian language family has very ancient roots. They have been shown to be related to languages and people living in north-central North America (perhaps near Alberta, Canada) at a very early date. These Algic languages and peoples appear to have migrated into California in two distinct in-migrations some 5000 to 6000 years ago. They are represented by two Native groups both located in northwestern California known as the Yurok and Wiyot.

The Athabascan language group has its expression in just four tribes in California:     Cahto, Hupa, Mattole, and Tolowa.

The Chumashan language family is a single linguistic isolate with no known relationships to other California Indian languages. The Chumash people were previously affiliated under the Hokan linguistic stock. Linguists have reconsidered that classification and now include all North Chumash speakers under their own banner of Chumashan. These speakers include those people and cultures identified as:

The Hokan language family has the widest and most fragmented distribution and appears to be one of, if not, the oldest of the linguistic stocks. It is known to contain 5 different language families and 5 isolated languages. The different native groups in California that spoke languages classified as Hokan include:

The Penutian language family is almost as old as Hokan Stock. Linguists are unsure of the exact nature of the relationships within this class. However somewhere between 27 and 38 individual languages are all grouped under the Penutian classification. Penutian serves as an umbrella for four different language families including Wintuan, Maiduan, Utian, and Yokutsan. Spatially, the Native tribes are all concentrated as a core expression within the heartland of California – in the central coast and interior valley. They include:

A major grouping of languages in California are those identified under the banner of the Utoaztecan language family. This language grouping hails originally from Mexico and includes languages identified as Numic and Takic. They include the Tubatulabal of the far southern Sierra Nevada, now considered a Takic language.

The Kawaiisu from the Tehachapi Mountains and the western Mojave are distinct languages of the Numic subfamily, along with Panamint of Death Valley and the Coso Range of eastern California. We also have the tribes that are considered Great Basin cultures including the Mono, Northern Paiute and the Chemehuevi. The Takic subfamily includes a number of cultures from southern California including:

One of the most ancient language groups and is identified as the Yukian language family or stock. It is represented only by two Native groups – the Yuki and Wappo. Both languages and Native groups are situated in the northwestern corner of California. It may be that these Yukian speaking peoples represent as old a language family as that of the Hokan or perhaps one that is even more ancient.

The large number of languages may be related to the ecological diversity of California.

The first wave of prehistoric people to settle in what we now call California arrived at least 12,000 years ago. California’s prehistoric population was one of the largest and most diverse in the Western hemisphere. They spoke no fewer than the sixty-four distinct languages, some sources say as many as one hundred, which is more than any other comparable area in the world outside of New Guinea.

Before white contact, California had more linguistic variety than all of Europe. We may see ninety percent of these languages, or perhaps all of them, disappear in our lifetime. 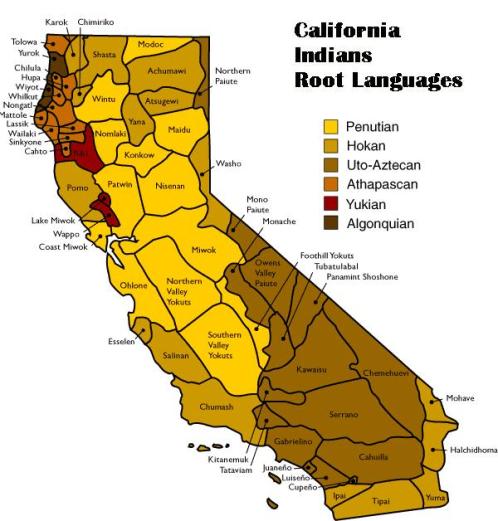