The Bad River Reservation in northwestern Wisconsin is the largest Chippewa reservation in the state. The reservation boundaries include lands in Ashland and Iron counties, 17 miles of Lake Superior shoreline and over 100 miles of rivers and streams. Over 90% of the reservation is undeveloped land. 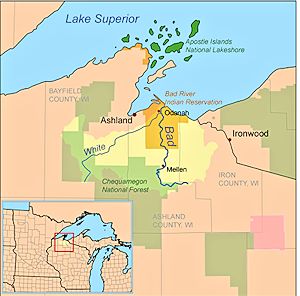 Photo by Kmusser via Wikimedia Commons

Reservation Communities:
Most people live in one of four communities: Odanah, Diaperville (also called Old Odanah), Birch Hill, or Frank’s Field/Aspen Estates. Odanah, the administrative and cultural center, is located five miles (8.0 km) east of the town of Ashland on U.S. Highway 2. New Odanah is also located on the reservation. Over 90% of the reservation is undeveloped land.

According to Anishinaabe prophecy, Gichi Manidoo, the Great Spirit, told the Anishinaabe people to move west from the Atlantic coast until they found the “food that grows on water.” After a series of stops and divisions, the branch of Anishinaabe known as the Lake Superior Chippewa found wild rice near the Chequamegon Bay on the south shore of Lake Superior, at the site of the present-day Bad River Lapointe Reservation. They made their final stopping place at nearby Madeline Island.

After the 17th century, Anishinaabe people settled throughout northern Wisconsin into lands formerly disputed with the Dakota Sioux and the Meskwaki. Those that remained near the trading post of La Pointe on Madeline Island were known collectively as the La Pointe Band; they engaged in the fur trade with neighboring French-Canadian settlers. They also pursued other seasonal occupations such as berry-picking, harvesting maple sugar, fishing, ricing, hunting, and gathering nuts, roots and medicinal plants.

The first treaty signed at Prairie Du Chien in 1825 showed that Ojibwe governance was decentralized and based on the consent of the Ojibwe people – over 40 Ojibwe signatures are on the document. After the Indian Removal Act in 1830, the Ojibwe were forced to concede large amounts of land in the Treaties of 1837 and 1842, but included language that clearly reserved the right to hunt and fish on the land.

In 1850, a removal order was issued for the Ojibwe bands, but a delegation was able to convince President Fillmore to rescind the removal order and begin the setup of permanent reservations. Treaty negotiations of 1854 established four reservations for the Ojibwe bands (Bad River, Lac Courte Oreilles, Lac Du Flambeau and Red Cliff), and again insisted on rights to hunt, fish, and gather on ceded lands.

After a disastrous attempt at removing the Lake Superior Bands in the 19th century, which resulted in the Sandy Lake Tragedy, the U.S. government agreed to set up permanent reservations in Wisconsin. At this point, the La Pointe band split: members who had converted to Roman Catholicism were led by Kechewaishke (Chief Buffalo) and took a reservation at Red Cliff. Those who maintained traditional Midewiwin beliefs settled at Bad River. The two bands, however, maintain close relations to this day.

The reservation land was set aside for the Bad River Lapointe Band in the Treaty of La Pointe, made with the United States and signed on Madeline Island on September 30, 1854. The treaty land included almost 2,000 acres (3.1 sq mi; 8.1 km2) on Madeline Island, which is considered the center of the Ojibwe Nation.

During the late 19th century, the Franciscan Sisters of Perpetual Adoration set up St. Mary’s School in Odanah, an Indian boarding school. Students came from a variety of tribes to learn English and western topics, as well as Christianity. During this period, timber companies on the reservation leased land for lumbering, but they cheated the tribe and destroyed much of the land by overlogging. During the Allotment period, the tribe leased almost half its land base, which originally covered all the area of modern-day Ashland, Wisconsin.

As Lake Superior Ojibwe, the Bad River Lapointe Band retains its rights to hunt, fish, gather wild rice, and medicinal plants over the ceded territory of northern Wisconsin, Michigan, and Minnesota. The tribe pressed these claims throughout the 20th century. Tribal members from Bad River and the other Lake Superior bands resumed their traditional practice of spear fishing, resulting in the Wisconsin Walleye War with recreational and sports fishermen.

In 1996, a group of Ojibwe activists known as the Anishinaabe Ogitchida blocked a railroad shipment of sulfuric acid from crossing the reservation; it was destined for a copper mine in Michigan. The protestors complained the acid posed an environmental danger to reservation lands and the Lake Superior watershed. The national attention brought by the protests forced the Environmental Protection Agency to stop the use of acid in the mine.

The headquarters of the Great Lakes Indian Fish & Wildlife Commission (GLIFWC) is on the Bad River Reservation. The tribe also owns and operates a fish hatchery, which stocks local rivers and lakes with 15 million walleye annually.

The Bad River Band Of Lapoint Ojibwe own and operate a casino, as well as the Moccasin Trail gas station and grocery store complex. The Tribe also runs a clinic, local transit, tribal school, daycare, and Head Start, as well as a police and volunteer fire department for its people. It has several community facilities: a tribal fire hall and youth center in the Birch Hill community, and a utility garage in the Franks Field community.

Bad River Reservation is nearly entirely covered by a forest and swamps. In Anishinaabemowin, they called the Anishinaabe people who lived around swamps Omashkiigowag (“Swampy people”), from mashkiig meaning “swamp”. The people also go by Mashkigonaabeg, which means “Swampy-men:, where the suffix -naabe is “male” or “man” in the Anishinaabe language.

Sixteen thousand acres (25 sq mi; 65 km2) of the reservation are high-quality wetlands due to the Kakagon River and the Bad River sloughs, registered by the United States government under the Ramsar Convention on Wetlands of International Importance. The wetlands are ideal for the cultivation of wild rice, the historical crop of the Ojibwe. The sloughs constitute the only remaining extensive coastal wild rice marsh in the Great Lakes region.

Due to its habitat and proximity to Madeline Island, Bad River is of major importance to the Ojibwe Nation. People from all over Ojibwe Country come for the annual August Celebration of the manoomin, or wild rice harvest.