Vernon Bellecourt, long time leader of the American Indian Movement (AIM) passed away today at about 2:45pm in Minnesota. He was one of the earliest and most active members of AIM and a prominent spokesman for the organization, and one of the finest orators of his time. 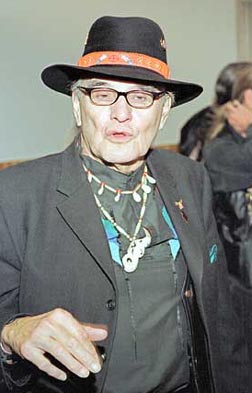 Vernon Bellecourt was a leader in American Indian Movement actions ranging from the 1972 occupation of the Bureau of Indian Affairs in Washington to the 1992 Redskin Superbowl demonstrations.

Vernon was a Co-founder and first Executive Director of the Denver AIM Chapter. His involvement at Wounded Knee in 1973 led to a Federal indictment.

In 1973, Vernon was interviewed by Penthouse Magazine, who described him as “the most militant Indian since Geronimo.”

Vernon Bellecort was a special representative of the International Indian Treaty Council and helped organize the first Treaty Conference in 1974.

He was jailed for throwing his blood on the Guatemalan Embassy to protest the killing of 100,000 Indians.

In 1978, Vernon Bellecort was elected to a 4-year term in his White Earth tribal government, where he served as secretary-treasurer and developed a model program for the spiritual education of Indian prisoners. He was the only nationally known AIM member to hold elected office on a reservation. He later ran for two unsucessful bids as tribal chairman.

Vernon was also a recipient of the City of Phoenix, Martin Luther King Human Rights Award in 1993.

Vernon Bellecourt was one of Charles and Angeline Bellecourt’s 12 children who grew up in a home without electricity or running water on the White Earth Reservation in Minnesota. His father served in the Army during World War I and fought in France, where he was shot and mustard-gassed. He returned to the States with permanent injuries that kept him from steady work.

Not that there would have been much chance of finding any. Historically the largest and poorest of northern Minnesota’s Ojibwe bands, White Earth back then had a 95 percent unemployment rate.

Vernon’s mother,Angeline, was a product of one of the notorious government boarding schools, where, according to Vernon’s brother Clyde, “every time they caught her speaking Indian they actually tied sacks of marbles to her knees, gave her a bar of soap and a rag, and made her scrub floors.”

Vernon Bellecourt, whose Objibwe name WaBun-Inini means Man of Dawn, was a member of Minnesota’s White Earth band of Ojibwe (Anishnababe) and was an international spokesman for the AIM Grand Governing Council based in Minneapolis.

His younger brother, Clyde Bellecourt, helped found AIM as a militant group in 1968 and Vernon Bellecourt soon became involved, taking part in the 1973 occupation of the town of Wounded Knee on the Pine Ridge reservation in South Dakota. “He was present only briefly during the 71-day standoff with federal agents, serving mostly as a spokesman and fundraiser on the outside,” Clyde Bellecourt said.

Vernon was active in the campaign to free AIM activist Leonard Peltier, who was convicted of killing two FBI agents during a shootout in 1975 on the Pine Ridge reservation.

He was also involved as a negotiator in AIM’s 1972 occupation of the Bureau of Indian Affairs headquarters in Washington, D.C. as part of the Trail of Broken Treaties caravan.

In recent years, Bellecourt had been active in the fight against American Indian nicknames for sports teams and served as president of the National Coalition on Racism in Sports and Media.

Bellacourt was arrested in Cleveland during the 1997 World Series and again in 1998 during protests against the Cleveland Indians’ mascot, Chief Wahoo. Charges were dropped the first time and he was never charged in the second case.

Vernon Bellecourt (WaBun-Inini) passed over into the spirit world earlier today, October 13, 2007, in Minneapolis, Minnesota surrounded by his friends and family. He had suffered from diabetes and heart problems for a long time and died of complications from pneumonia at Abbott Northwestern Hospital. He was 75. He is survived by his brother Clyde, and one sister.

Just before he was put on the respirator, Vernon Bellecourt joked that the CIA had finally gotten him, his brother said. He passed peacefully to the spirit world within three minutes after being removed from the respirator.

After Wounded Knee, Vernon Bellecourt became a leader of AIM’s work abroad, meeting with presidents such as Daniel Ortega of Nicaragua, Palestinian leader Yasser Arafat and Libyan leader Moammar Gadhafi, his brother said. He said they plan to list them as honorary pallbearers.

Clyde Bellecourt said his brother had been in Venezuela about four weeks ago to meet with President Hugo Chavez to discuss Chavez’ program for providing heating assistance to American Indian tribes. He fell ill around the time of his return, Clyde said.

Vernon had no medical insurance plan and the Bellecourt family is collecting donations to help pay for medical and burial costs.

Donations and cards can be sent to: