Sassamon (Christian name John) was a Christian Indian raised in Natick, one of the “praying towns” of the Wampanoag tribes. He was educated at Harvard College.

Sassamon had served as a scribe, interpreter and counselor to Metacom and the Wampanoag Indians. 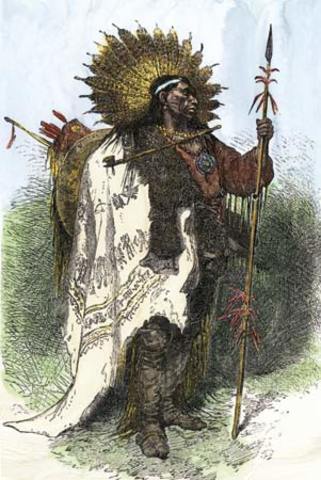 But, a week before his death, Sassamon reported to Plymouth governor Josiah Winslow that Metacom (Philip) was planning a war against the English.

Sassamon was found dead under the ice of Assawompsett Pond a week later.  At first, the Puritans thought that he had drowned by accident while fishing. However, further examination suggested that he was murdered because his neck was broken, most likely from a violent twisting.

Further evidence came from the Christian convert Patuckson who Identifies three of King Philip’s men, Wampaquani, Tobias, and Mattashunnamo and claims to have seen King Philip’s men kill Sassamon and put him in the icy pond.

After a trial by a jury of twelve Englishmen and six Christian Indians, the Wampanoag men were hanged in June 1675.

Even if they were innocent, with a jury comprised of colonists and Christian Indians, the hanged men would not have received a fair trial.This trial was the first in Plymouth to include a mixed jury.

This execution, combined with the rumors that the English wanted to capture King Philip, was a catalyst for King Philip’s War.

Just three days after the execution, the colony received reports that a small force of King Philip’s men were  armed and on the outskirts of town.

A few days later John Easton and his merry magistrates meet with King Philip to discuss peace and hear his grievances, but alas, the negotiations do not go as Easton had hoped.