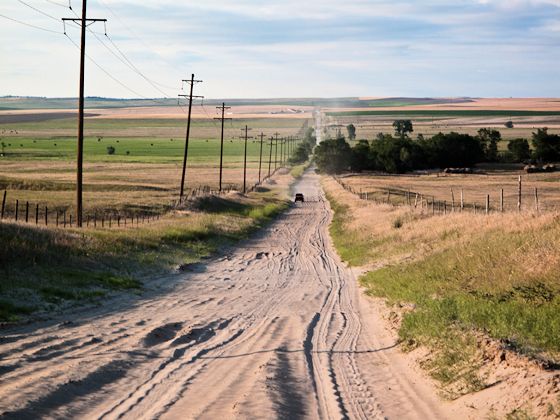 The Yankton and Yanktonais are called the Wiceyala or Middle Sioux.

Four bands of the Isanti, or Stone Knife People, including the Mdewankanton, Wahpetonwan, Wahpekute, and Sissetonwan comprise the Eastern Division of the Sioux Nation.

This reduction of Tribal lands to a reservation with defined boundaries by the U.S. Congress in the Act of March 2, 1889, which identified all the Lakota/Dakota reservations, is known as the Great Sioux Settlement. The Oglala Sioux Tribal government maintains jurisdiction within the boundaries of the reservation including all rights-of-way, waterways, watercourses and streams running through any part of the reservation and to such others lands as may hereafter be added to the reservation under the laws of the United States.

The Tribal government operates under a constitution consistent with the Indian Reorganization Act of 1934 and approved by the Tribal membership and Tribal Council of the Oglala Sioux Tribe. The Tribe is governed by an elected body consisting of a 5 member Executive Committee and a 16 member Tribal Council, all of whom serve a four year term.

Pine Ridge is home to the Oglala Lakota who are members of a major Sioux division known as the Western or Teton Sioux. Pine Ridge has a tribal membership that totals 17,775. One third of the total population report Lakota as their first language. 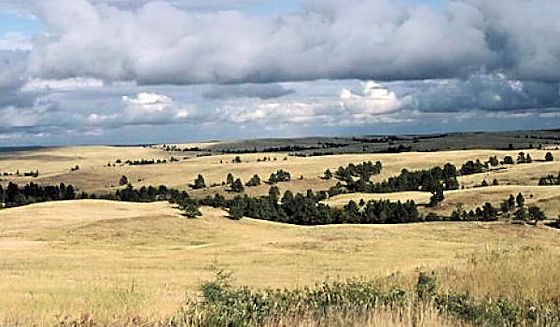 The Pine Ridge Reservation is situated in southwestern South Dakota on the Nebraska state line, about 50 miles east of the Wyoming border. The area includes over 11,000 square miles contained in seven counties; Bennett, Custer, Fall River, Jackson, and Shannon counties in South Dakota. Pine Ridge, Kyle, and Wanblee are the largest communities on the reservation. Other smaller communities include Manderson, Oglala, Porcupine, Red Shirt, and Wounded Knee.

The three diverse geographic regions within the service unit borders make Pine Ridge one of the most scenic service units within the Aberdeen Area. The southern and eastern sections of the service unit consists of wide open grassy plains. In the west central section the prairie merges into the small eastern spurs of the Black Hills which are further to the west. The result is an area of rolling pine covered hills and ridges, providing the inspiration for the name Pine Ridge. To the north of the wooded area are approximately 160,000 acres of badlands, characterized by roughly eroded ridges, peaks, and mesas. The badlands are known for their panoramic beauty created by the shapes and colors of the land formations.

The Pine Ridge reservation is home to the Oglala Sioux Tribe. The Reservation is located in southwestern South Dakota with Fall River and Custer County lines as the western border with the Badlands and Jackson County as the northern border joining the Rosebud Reservation on the northeast corner. The Bennett County line is the eastern boundary and the Nebraska border is the southern boundary of the reservation. The total land area of the Pine Ridge reservation is 2.8 million acres with 1.7 million acres tribally or individually owned. The land is an integral part of the Lakota culture and the economic base of the reservation. 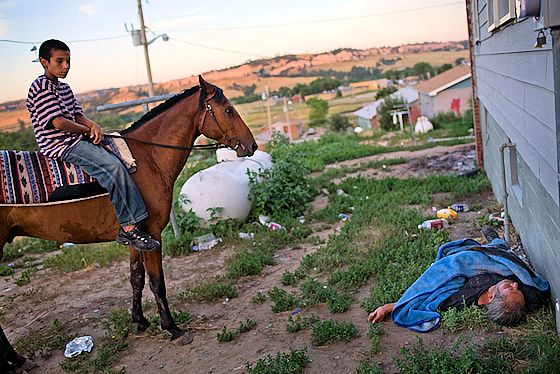 The Great Sioux Nation is also called The Lakota/Dakota/Nakota Nation. The people of the Sioux Nation refer to themselves as Lakota or Dakota which means friend or ally. The United States government took the word Sioux from (Nadowesioux), which comes from a Chippewa (Ojibway) word which means little snake or enemy. The French traders and trappers who worked with the Chippewa( Ojibway) people shortened the word to Sioux.

The Oglala Sioux Tribal members are descendants of the Tetonwan Division of the Great Sioux Nation. The Lakota Nation includes Oglala, Brule, Hunkpapa, Blackfoot, Minnecoujou, No Bows and Two Kettle. The Lakotas speak an “L” dialect of Siouan language and were expert horsemen and buffalo hunters on the plains.

The Yankton and Yanktonais are called the Wiceyala or Middle Sioux. Four bands of the Isanti, or Stone Knife People, including the Mdewankanton, Wahpetonwan, Wahpekute, and Sissetonwan comprise the Eastern Division of the Sioux Nation. The Yanktonias speak the “N” dialect and the Isanti speak the “D” dialect of Siouan language. The Yanktonais and the Isanti were a river-plains people who did some farming as well as buffalo hunting.

The government identified all the Tribes with similar languages as the Sioux people. The oral tradition of our people state that the Lakota and Dakota people were one nation. The Lakota people moved away and formed their own nation. The Lakota/Dakota/Nakota people still practice their sacred and traditional ceremonies which encompass the seven rites of Lakota religion brought by the White Buffalo Calf Woman.

Social activities such as powwow, rodeos, and races are celebrated in the summer months. Special powwows held for individuals who accomplished a stage in their lives such as graduation or acceptance into the armed forces with traditional honoring ceremonies, give away, and feasts to celebrate the accomplishments. The oral tradition is still passed down from the elders to the youth.
The future of our people is in the hands of our children. The children of the Great Sioux Nation will bring us into the 21st century with pride.

The territory extended from Canada in the north to the Republican River in Kansas in the south. The Great Sioux Nation was reduced in the 1868 Fort Laramie Treaty from the Big Horn Mountains in the west to the east side of the Missouri River, the Heart River in North Dakota in the north and the Platte River in Nebraska to the south. This includes the entire western half of South Dakota.

The Lakota people starved but refused to sell their sacred land so the U.S. Congress illegally took the Black Hills from the Great Sioux Nation. The Allotment Act of 1888 allotted Indian lands into 160-acre lots to individuals to divide the nation. The Act of 1889 broke up the Great Sioux Nation into smaller reservations, the remainder of which exist today at about one half their original size in 1889.

Many of the Lakota people began believed in the Ghost Dance experiences as the movement spread to the reservations. The U. S. Army feared the unity through prayer among the Tribes and ordered the arrest of Sitting Bull on the Standing Rock Reservation. In the process of the arrest Sitting Bull was shot by Indian Police on December 15, 1890.

The Hunkpapa who lived in Sitting Bull’s camp and relatives fled to the south onto the Cheyenne River Reservation. They joined the Big Foot Band in Cherry Creek, South Dakota then traveled to the Pine Ridge reservation to meet with Chief Red Cloud. The 7th Cavalry caught them at a place called Wounded Knee on December 29, 1890. The 7th Cavalry took all the weapons from the Lakota people. The 7th Cavalry massacred 300 people at Wounded Knee and left the bodies to freeze in the snow. The people of the Great Sioux Nation slowly recovered from this injustice and continue to survive in their homeland.

Of all the reservations in the Dakotas, Pine Ridge is the one most noted on the National level. Several possible explanations for this recognition exist. First, in early reservation history Pine Ridge was the site of the 1890 tragedy at Wounded Knee Creek in which most of Chief Big Foot’s band of Minneconjou Teton Sioux were annihilated by the Seventh Cavalry. In more recent history, National media attention was focused on the 1973 armed occupation of the community of Wounded Knee by members of the American Indian Movement (AIM). Despite all the adversity encountered by the Oglala they remain a people of vitality, hopefulness, and with their cultural identity intact.

The climate of the reservation is typical of the Northern Great Plains with extremes during the summer and winter that vary from 105 to -30 F respectively. The average temperatures range from 74 in July, to 21 F in January. The normal precipitation for the year averages 19 inches.

Distance, weather conditions, and the lack of automobiles are the major deterrents to access at Pine Ridge. There is no public transportation on the reservation. Almost all travel is by private car. However, not all residents have access to a car and must depend upon friends or relatives for rides. Many people walk to reach their destination, but the distance between communities and weather conditions limits this activity. Consequently, a combination of hitchhiking and walking has become common.

Highway 18 travels across the reservation from east to northwest and is the major artery. Other paved major all-weather roads include S.D. 87, 29, and 75, and BIA 2, 27, 28, 40, and 41. Isolated homes and communities are serviced by gravel roads. Most homes on the reservation are inaccessible during periods of blizzards or heavy rain.

There is an approved paved landing strip near the Pine Ridge community.

The majority of employment is provided by the Oglala Sioux Tribe, Oglala Lakota College, Bureau of Indian Affairs, the Indian Health Service, and the Praire Winds Casino.

The Oglala Sioux Tribe has some of finest hunting and fishing around with guided hunts provided by the Parks and Recreation Department.

The Oglala Sioux Tribe sponsors an annual pow wow the fourth week in August. This event also includes a rodeo, outdoor concert, and a softball tournament. There are pow wows held year round in the various communities for holidays and honoring occasions.

The community of Pine Ridge has a campground near the pow wow grounds and a number of lakes for fishing and swimming. During the year other sports activities such as softball, volleyball, and basketball tournaments are also held during the year.

Electric utility services for the Pine Ridge Reservation are provided by LaCreek and ………….The Golden West Telecommunications Company provides telephone service to the reservation. A tribal member provides cable TV service in the Pine Ridge community. The Tribe operates the water department, and solid waste collection for the communities. The Mni Wiconi Project is under construction to supply clean water from the Missouri River to the communities that do not have potable water or are served by wells with poor water quality.

The Oglala Sioux Tribe provides an elderly nutrition program, and sponsors community activities. Youth recreational activities are provided through local organizations including a rodeo club. Health care is provided by the Indian Health Service at the Pine Ridge Hospital and Health Center Clinic in coordination with the Tribal Health Department Community Health Representative and Ambulance Service. The Health Department also provides examinations and eyeglasses to all residents at reduced rates.

Public housing on the reservation is managed by the Oglala Sioux Tribal Housing Authority. The Authority has constructed housing for approximately 43% of the approximately 2,300 families on the reservation. The Housing Authority manages housing units in the communities an on scattered rural sites through HUD Low Rent and Mutual Help home ownership housing programs. Other housing is available through the Bureau of Indian Affairs and Indian Health Service for their employees. Private housing stock is limited.

The housing has been apportioned to the nine (9) districts by population and need. The Housing Authority is working on reducing the backlog of substandard housing and also to construct houses for approximately 4% of the families that do not have any housing of their own.

The Oglala Sioux Tribe desires to continue their progress in providing for our people and the development of increased self-sufficiency. The Tribe continues to explore means to develop Tribal resources and pursue other business development initiatives. There are plans to develop cultural resources to preserve and educate Tribal members and non-members. The development of tourism will strengthen the economy on the reservation. The Crow Creek Sioux Tribe will continue to search for ways to maintain our culture and develop new economic opportunities for our future generations.

Rez Ramblings: Living on the Pine Ridge as 21st Century as an “Injun”