Is this earring an authentic Mohican design?

Is the earring worn by Russel Means in the role of Chingachgook in the 1992 movie, The Last of the Mohicans, an authentic Mohican design?

THE LAST OF THE MOHICANS is the second part of a five-book series written by author James Fenimore Cooper called The Leatherstocking Tales. Leatherstocking Country refers to the area around Albany, New York, that includes Cooperstown, where the author grew up. It is a fictional work based loosely on historical facts, and the author made some mistakes.

The story told in The Last of the Mohicans is set in 1757 during the Seven Years’ War (known in America as the French and Indian War), when France and the United Kingdom battled for control of the American and Canadian colonies.

He gave several of his Mohican characters Mohegan names and placed their homeland in Mohegan territory. The real Mohegan (not Mohican) sachum, Ungus, died in 1693. Because the Mohegan clans are patriarchial, he was suceeded first by his son, and then his son’s son.

Because of this error, some people still call the Mohegans who live in Connecticut “Mohicans” today. The Hollywood adaptation of his book further romanticized and embellished the story with scenes that are not historically factual. The earring in question is just one example.

Because of this movie, many people still believe the Mohicans are an extinct tribe, when, in fact, more than 1,500 Mohicans live in Wisconsin today. We now know them as the The Stockbridge – Munsee Band of the Mohicans, because they share their reservation with the Munsee Indians. Small groups of Mohicans also live in New York, Connecticut, and Ohio. Mahican is a mispelling of Mohican, which is used interchangably today.

According to a Mohican oral history that was written down in 1734, the ancestors of the Mohicans “…emigrated from the west by north of another country; they passed over the great waters, where this and the other country is nearly connected.”

According to this account of a Bering Strait crossing, the islands of the west were close together and the nearby water [Pacific Ocean] was effected by the tides, giving rise to their name “Muhheconnuk,” (Muh-he-con-nuk), which means “great waters or sea, which are constantly in motion, either flowing or ebbing.”

The narrator of this oral history said the early ancestors had been more civilized than their descendants. He said, “In time, there arose a mighty famine which obliged them to disperse throughout the regions of the wilderness after sustenance, and at length we lost our ways of former living. As they were coming from the west, they found many great waters, but none of them were flowing and ebbing like Muhheakunnuk, until they came to Hudson’s River; then they said one to another, ‘this is like Muhheakunnuk, our nativity’.”

The Mohican ancestors soon found new homelands in the valleys of the eastern rivers, first settling on the banks of the Hudson River.

The oral history continued, “The people who first came to the upper Hudson River Valley were the ancestors of the Mohicans, Pequots and the Mohegans. Before these people were known by these names, they were all Delaware. The Mohican clans, which are matriarchial, were the turtle, the bear and the wolf.”

It is from the Delaware (Lenni Lenape) that most Algonquian woodland peoples descend, and thus, the Delaware are referred to as ‘grandfathers’. This Delaware parentage is supported by linguistic, cultural, and geographical evidence, as well as many traditions among the Algonquians.

There are no previous written records of this, but the first people of the area were living there over 12,000 years ago. Clovis points have been found in the Hudson River Valley dating to that era. The Mohegans, Mohicans, and Pequots have been separate and distinct nations for hundreds of years, well before 1609, when James Hudson first encountered them.

Long after their eastward migration, the Mohicans intermarried with other tribes and had become a detached body, mixing two languages together, and forming out of the two a dialect of their own, choosing to live by themselves.

The Delaware oral tradition has the Shawnee contributing to this new dialect and speaks of the Mohicans asking on behalf of the Shawnee for permission to settle the Ohio River region. The patriarchal Delaware granted the request and the Ohio River country became home to the Shawnee.

The homeland of the Mohican Indians once covered the woodlands of New England from the ocean to the shores of the Hudson and Housatonic rivers to the west, and from Manhattan Island to Lake Champlain in the north.

The “Muhheconnuk”, or Stockbridge Indians, live today in Wisconsin; a far distance from their Housatonic River home between the Hudson and Connecticut River valleys. This came about in six migrations.

Mohican, Wappinger, and other Algonquian Indians banded together in the missionary town of Stockbridge, Massachusetts as they were pushed westward by the European colonists. Brothertown Indians from Pennsylvania and Delaware Munsee Indians later joined this group which underwent 6 major resettlements following the loss of their original homelands.

The Many Trails symbol, designed by the late Elder Steve Comer, and first rendered in silver by another Mohican tribal elder, Edwin Martin, is the official symbol of the Stockbridge-Munsee tribe.

Steve Comer was a highly sought after speaker on Mohican history around the eastern U.S. and Canada, specializing in their history after their so-called demise at the ink-stained hands of James Fennimore Cooper. As a matter of fact, the “extinct” Mohicans are one of a very few tribes to defeat the Wal-Mart Corporation over desecration of burial grounds.

Mr. Comer started out as a student at Wisconsin State University, but an interest in Eastern Religion led him to a Zen Buddhist center in his ancestral territory in New York, where he collaborated in the formation of a Native American Institute at Columbia-Greene Community College, developing primary and secondary school curricula covering native history of the Hudson Valley, archaeology and nature studies.

The Stockbridge- Munsee Band of Mohican Indians has adopted the “Many Trails” symbol as a representation of strength, hope and endurance representing the many moves they endured since leaving the State of New York in the 1700’s.

Originally from the shores of the Mahicanituck (now renamed the Hudson River) this band of Mohican people moved several times, settling in Stockbridge, Massachusetts, parts of New York, stopping in Ohio and Indiana and settling three times before their final move to the Stockbridge-Munsee Indian reservation in Shawano County, Wisconsin.

The tribe has maintained residency in this area for over 100 years now, and it is their longest stay since leaving New York.

At the time James Hudson arrived in the early 1600s, copper from the Great Lakes was a prized trade item used extensively for adornment and valuable wampum beads for trade were obtained from the Delaware and Narangassetts.

were known for their beadwork and basketry. Like other eastern American Indians, Mohicans also crafted wampum out of white and purple shell beads.

Wampum beads were traded as a kind of currency, but they were more culturally important as an art material. The patterns and pictures on wampum belts often told a story or represented a person’s family.

Wampum bead necklaces were also popular with Mohicans, particularly women, purely for adornment. They were strung in strands that hung to mid-bossom and were always worn in multiples, at least three for daily wear, and a dozen or more for special occasions. At an important celebration, a Mohican woman might be wearing up to ten pounds of these wampum necklaces at one time.

These “Pound” beads (approx 6/0 or 8/0) in white, dark blue, light blue, red, and black were common, though other colors show up as well. Also mentioned on period trade lists are “barleycorn” beads (red, blue, black and white) and wampum.

In the 1600s and early 1700s, copper was used extensively for body adornment. The earliest signs of metallurgy, using copper to make jewelry, was seen around 7,000 years ago. Common items for both men and women were nose rings or nose bobs with a dangling triangle or a cylindrical bead, earbobs (earrings), and 2 1/2 to 3 1/2″ wide bracelets worn with three or four on each arm.

These were originally made of copper, and later transitioned into silver when that metal became more available. In addition, men wore copper chest plates that could be as much as 7 inches wide and a foot long.

When European explorers came to the Americas, they traded whatever they had with the natives. This was usually in the form of brooches used to decorate clothing. Some of these large pieces were later cut down by natives to make smaller triangle and solid disc earrings.

The Europeans soon discovered that silver jewelry was in demand. It wasn’t long before they began having silversmiths in Europe produce fine works specifically for the silver trade with natives. This type of jewelry became known as trade silver.

While there were some silver articles earlier, the vast majority of silver jewelry was dispursed by the French beginning in about the 1730s, and later, the English also brought silver to trade. An earring or nosebob cost about one beaver skin or two deer hides, with larger items costing as much as 3-4 beaver skins. By the mid 18th century, 25% of the fur trade was traded for silver, almost as sought after as guns, shirts, wool blankets, knives, cooking articles, and gun powder.

Early earrings worn by the Mohicans consisted of cylindrical beads, such as those pictured above, simple triangles, or slightly concave, solid discs. The technique used to create wheel earrings was not invented until the late 1700s to early 1800s, (regardless of what you saw in the Last of the Mohicans movie) and were not in use in the mid 1700s. 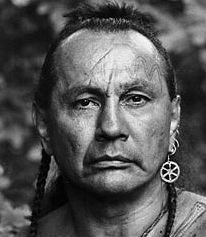 This originates in Buddhism and is the oldest Buddhist symbol. Buddha said its spokes are rules of pure conduct; justice is uniformity of their length. Wisdom is the rim; modesty and thoughtfulness are the hub, in which the immovable axle of truth is fixed.

The more elaborate form of the wheel of life has six spokes and is used in all the dharmic religions.

RELATED LINKS ON THE WEB:

The Muh-he-ka-ne-ok
This site covers the Stockbridge Munsee Tribe of Mohican Indians and a timeline of important dates in the history of the Mohicans.

Explanation of the symbolism of the Wheel of Life

This site gives a detailed explanation of the meanings attributed to the Wheel of Life, with many large detailed pictures.

RELATED LINKS ON THIS SITE:

Who were the Mohegans?

Tribes from the Algonquian language group

What is sterling silver, anyway?

How do I know if ‘Indian Jewelry’ is authentic and made by a real Indian?