The original Iroquois League, based in present-day upstate New York, was also known as the Five Nations, as it was composed of the Mohawk, Oneida, Onondaga, Cayuga, and Seneca nations. The Five Nations are believed to have emerged as distinct tribes by the 15th century or earlier. Each nation had a distinct territory and function within the League. Iroquois influence extended into Canada, westward into the Great Lakes and down both sides of the Allegheny mountains into Virginia and Kentucky. To reduce conflict, these people came together in an association known today as the Iroquois League, which in their language was known as the League of Peace and Power.

The League is embodied in the Grand Council, an assembly of fifty hereditary sachems.

The Iroquois and most Iroquoian peoples have a matrilineal kinship system; descent and inheritance pass through the maternal lines, and children are considered born into their mother’s clan. Their clan mothers, or main women of the leagues, have considerable political power, helping determine chiefs within a warrior culture. The nations often took captives in warfare, adopting young survivors. Their adoptees included European captives as well as Native Americans; they were adopted by women into specific clans within each nation. Scholars suggest this practice helped the nations’ retain their power in decades of high mortality due to infectious disease and warfare.

When Europeans first arrived in North America, the Haudenosaunee were based in what is now the northeastern United States, primarily in what is referred to today as upstate New York west of the Hudson River and through the Finger Lakes region.

French, Dutch and British colonists in both Canada and the Thirteen Colonies recognized a need to gain favor with the Iroquois people who occupied a significant portion of lands west of colonial settlements. Thus, for nearly 200 years the Iroquois were a powerful factor in North American colonial policy-making decisions. Alignment with Iroquois offered political and strategic advantages. Simultaneously, the Iroquois were universally feared by colonial settlers. The Iroquois remained a politically unique, undivided, large Native American polity up until the American Revolution.

Modern scholars distinguish between the League and the Confederacy. According to this interpretation, the Iroquois League refers to the ceremonial and cultural institution embodied in the Grand Council, while the Iroquois Confederacy is the decentralized political and diplomatic entity that emerged in response to European colonization. The League still exists. The Confederacy dissolved after the defeat of the British and allied Iroquois nations in the American Revolutionary War. After the defeat of the British and their Iroquois allies in the American Revolutionary War, most migrated to Canada. 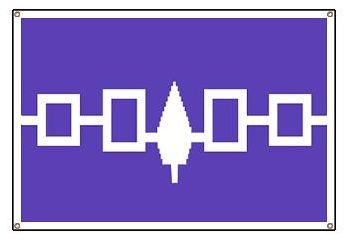 Other Iroquoian-speaking peoples had lived at various times along the St. Lawrence River, around the Great Lakes, and in the American Southeast, but they were not part of the Haudenosaunee. Some competed and warred with the Haudenosaunee. After extended colonial warfare against the Tuscarora an Iroquoian people in North Carolina, survivors migrated north in the early 18th century to join the Iroquois in New York. They were accepted as the Sixth Nation in the Iroquois League. Remnants of other, now extinct tribes, are known to have been absorbed over time into the Iroquois.