Indian Chief Hanged in 1858 Is Cleared

Chief Leschi of the Nisqually Indian tribe was exonerated by a historical court on Friday, nearly a century and a half after he was hanged for the death of a militia soldier in what is now Washington State.
The unanimous verdict by a seven-judge panel is not binding legally, but it drew cheers from the hundreds who gathered at the state history museum to hear the decision.

Chief Leschi (pronounced LESH-eye) was hanged in 1858 for killing Col. A. Benton Moses of the territorial militia in the region’s Indian war of 1855.

The historical court, convened just to hear this case and led by the chief justice of the State Supreme Court, Gerry L. Alexander, ruled that if Chief Leschi did in fact kill Colonel Moses, a murder charge was not justified because they were lawful combatants in a time of war. 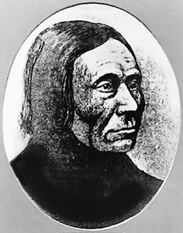 I’m just happy; this is really about the future,” said Cynthia Iyall, a descendant of Chief Leschi’s sister and chairwoman of the Committee to Exonerate Chief Leschi. “This is for all the kids: they need to know who that man was and what truthfully happened to him.”

John W. Ladenburg, the former prosecutor who helped represent Chief Leschi’s descendants before the historical court, said it was important to establish the truth.

“We cannot bring Leschi back to life, and we cannot restore Leschi to his land,” said Mr. Ladenburg, the Pierce County executive. “We can, we must, restore his good name.”

Over the years, Chief Leschi’s guilt was questioned by historians and even his executioner.

After the chief’s first trial ended with a hung jury, the judge in the second trial refused to instruct jurors that killing an enemy soldier in war was not considered murder. Chief Leschi was convicted and sentenced to death. On appeal, the territorial Supreme Court refused to consider new evidence showing that he had been miles away when Colonel Moses was killed.

The Army refused to execute Chief Leschi, because military leaders believed the rules of war should have prevented him from being charged with murder. Instead, the Pierce County authorities oversaw his execution on Feb. 19, 1858. His hangman, Charles Grainger, later said, “I felt then I was hanging an innocent man, and I believe it yet.”

Chief Leschi’s name is remembered in the region. His name appears on schools, monuments, a park and a Seattle neighborhood.

Justice Alexander proposed holding the historical court because he did not think the current State Supreme Court had the power to overturn a decision by its territorial predecessor.

Andreya Squally, a 17-year-old member of the Nisqually tribe who attended the trial, recalled arguing about Chief Leschi at school, insisting that he had been unjustly convicted.