How to weave a cattail mat

Sewn cattail mats were often used as exterior coverings of wigwams. Most full-size sewn cattail mats measured five to six feet wide and 10 feet long. It would take half a dozen or more mats to cover a wigwam.
1. After gathering and preparing the cattails in late summer, remove and discard the brittle tip and the thick very end. Sort the cattails into bundles consisting of four leaves. The desired width of the mat determines the length of cattail leaves used.

2. Find two fixed points (like two poles stuck in the ground, or two furniture legs). These points should be slightly farther apart than the length of the mat. Cut a ‘stabilizing’ string that you can tie to each of the fixed points. Using two round sturdy cattail center stalks. Tie either end of the ‘stabilizing’ string to the end of a center stalk (the desired width of the mat determines where to tie the stalks with the string). Beneath the ‘stabilizing’ string, use clove hitch knot to fasten a double-length (or longer) string that will be used to twine around bundles of cattail leaves.

3. In each bundle of cattail leaves, use four individual leaves. Arrange the four leaves into a bundle of two pairs, with the curved-out side of the leaves in each pairs facing to the outside of the mat. Fold a leaf bundle around the ‘stabilizing’ string. First fold two leaves over the string in one direction; the other two leaves in the opposite direction (alternating the thick and thin ends of the leaves for even thickness down the width of the mat).

5. The mats are ‘double-matted’, that is the mats are stitched through from both sides of the mat. From the first side of the mat, sew through the flat width of two leaves (of the four in each bundle), from one edge of the mat to the other. Then turn the mat over to the second side and sew back through the remaining two leaves in each bundle. Now repeat subsequent rows of stitching in the same manner. Rows of stitching should be 4 to 6 inches apart. 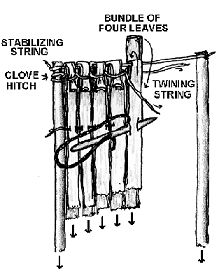 6. After all the rows are stitched, the rough edge of mat can be finished like the top with twining around each folded-over leaf bundle.

7. The folded-over ends can also be trimmed even with each other.