The Bear Spring Treaty was the first treaty made with the Navajo tribe. It affected the traditional Navajo homelands, which stretched from Arizona through western New Mexico, where there was a long history of Southwest bands raiding and trading with each other all the way back into the late 1500s. The people who shared this geographical area included Navajo, Spanish, Mexican, Apache, Comanche, Ute, and after 1846, American settlers. A Navajo raid on Socorro, New Mexico near the end of September, 1846, precipitated this American Indian treaty with the United States. 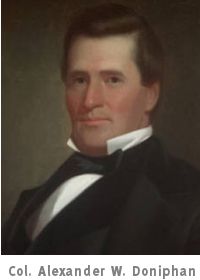 Principal Signatures: Colonel Alexander Doniphan for the United States, and  Chief Narbona for the Navajo

General Stephen W. Kearny heard about the raid on Socorro, and told his second-in-command in Santa Fe to send a regiment of soldiers into Navajo country and secure a peace treaty with them. 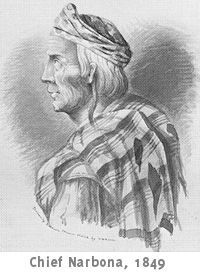 We know of this treaty from the journal entry of a Private Hughes, who served under Colonel Doniphan. His account may be the only existing eye-witness description of the 1846 meeting between Doniphan and Navajo leaders at Ojo Oso (Bear Spring).

Wording of the Treaty 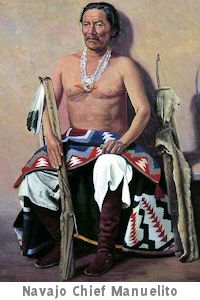 ARTICLE I.  A firm and lasting peace and amity shall henceforth exist between the American people and the Navajo tribe of Indians.

ARTICLE 2. The people of New Mexico and the Pueblo Indians are included in the term American people.

ARTICLE 4. There shall be mutual restoration of all prisoners, the several parties being pledged to redeem by purchase such as may not be exchanged each for each.

ARTICLE 5. All property taken by either party from the other, since the 18th day of August, last, shall be restored.

The undersigned, fully empowered to represent and pledge to the above articles their respective nations, have accordingly hereunto signed their names and affixed their seals.

Signatures of the Navajo Chiefs