Apalachee Tribe, Missing for Centuries, Comes Out of Hiding

A veteran archaeologist, Bonnie McEwan sifts dirt in search of vanished cultures. It’s not every day she hears from one in person.

Dr. McEwan directs Mission San Luis, a 17th-century site where Spanish friars baptized thousands of Apalachee, an Indian nation so imposing that early mapmakers bestowed the tribe’s name on distant mountains, known ever since as the Appalachians. In 1704, English forces attacked, driving the Apalachee into slavery and exile. Scholars long ago pronounced the tribe extinct.

Then Dr. McEwan received a call from the dead. “This is Gilmer Bennett,” a drawling voice said on her answering machine, “chief of the Apalachee.”

Dr. McEwan thought the message was a prank by a colleague. “If you’d told any archaeologist that a mission-era Florida tribe still existed, they’d have laughed in your face,” she says. 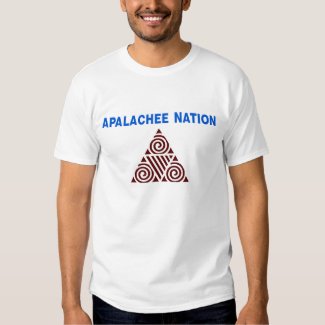 Eight years later, Dr. McEwan and Mr. Bennett talk on the phone every week. The mission’s museum now displays baskets, beadwork and photographs of today’s Apalachee, who number about 300. Mr. Bennett’s band also appears in a new edition of the Smithsonian Institution’s “Handbook of North American Indians,” the bible of scholarship on native people.

And the Apalachee have shipped 13 bound volumes of documents to Washington in hopes of gaining federal recognition as a tribe: an effort that has stalled because the government requires proof that the Apalachee endured as a tribe after they were last heard from several centuries ago. “We didn’t die out,” Mr. Bennett says. “We hid out, to survive.”

Claims of Indian heritage aren’t rare these days, particularly in the South, where laws and attitudes stigmatizing nonwhites have waned. In polls, more than 40% of Southerners now say they have an Indian ancestor. In fact, says John Shelton Reed, a sociologist at the University of North Carolina, white Southerners are likelier to claim an Indian than a Confederate forebear. But the Apalachee stand out because of their hidden epic of survival — and because of the modest couple who have brought them to light.

Mr. Bennett is a retired carpenter with high, wide cheekbones, deep-set eyes, flowing gray locks and tawny coloring he calls “Coppertone skin.” He believes he’s 73 years old, but no one recorded his birth properly. Mr. Bennett lives in the woods of Libuse, La., with his 66-year-old wife, Jeanette, whose braided hair falls to the middle of her back. Adjoining their small house is a converted garage of unfinished plywood and Sheetrock: the tribal office.

“I’m dyslexic, diabetic and only finished the ninth grade, and here I’m the tribe’s genealogist,” says Mrs. Bennett, plucking folders from file cabinets crammed with birth, baptismal and other records she has compiled. Mr. Bennett says he spoke only pidgin “French and Indian” until he was 10, spent years “sitting silent in the back of the classroom like a dummy,” and left school at 15 to start work. The Bennetts don’t know how to use a computer. They live on Social Security and veteran’s benefits from Mr. Bennett’s combat service in Korea.

“We get by, just like our people always done,” says Mr. Bennett, who has a “centla drawl,” short for central Louisiana. “It ain’t no rosy thing, being Apalachee all these centuries.”

This is a considerable understatement. The Bennetts’ trove of documents tell a tale of unrelenting woe since 1704, when the Florida mission burned. About 800 Apalachee fled west to French-held Mobile, straight into a yellow-fever epidemic. Eighty survivors later settled 22,000 acres along Louisiana’s Red River, under French and Spanish rule. But when the U.S. took control in 1803, American settlers started burning Apalachee cabins and crops and seizing their land.

The U.S. War Department ordered its agent in the area to “take immediate steps to secure the Indians in their rights.” Instead, after years of inaction, the government sold the land to the tribe’s main tormentor, a cotton planter who used his slaves as shock troops against Indians.

So in 1835 the Apalachee fled again, to bayou and hill country so marginal and remote that “nobody could be bothered stealing it from us,” Mr. Bennett says. They hunted, farmed and clung to their Spanish-bred Catholicism. Apalachee pale enough to pass as white served as interlocutors with the world beyond the tribe’s swampy hide-out.

But in the early 1900s, attacks resumed, this time by Klansmen who used dogs to chase Indians and club them to death, including Mr. Bennett’s grandfather. Many Apalachee sought refuge in towns — only to encounter Jim Crow laws that often treated Indians as black. In 1940, when Mr. Bennett’s parents divorced, his father moved in with a white woman and was arrested for the felony of racial mixing. Mr. Bennett, then 8, was paraded in court with his siblings, half-naked, as evidence that his father wasn’t black. The case ended in acquittal.

Such experiences deepened the band’s determination to hide its heritage. Mr. Bennett’s grandmother wore hats and long dresses, lest her skin darken in the sun, and learned English by watching television. Parents told children to mimic whites, or didn’t tell them they were Indian at all. Adults discreetly discussed tribal business at annual gatherings; customs such as basket-making survived; and the role of chief quietly passed to Mr. Bennett in his twenties. But otherwise the Apalachee tried to blend in as best they could.

It wasn’t until the 1980s that Mr. Bennett finally decided “it was safe to come out of the woods and say who we were,” as he puts it. He and his wife were motivated, in part, by the hope of educational assistance for their six children. So the couple began the slow process of documenting their heritage in order to win tribal recognition, which brings access to scholarships and other benefits.

It was as a result of their research that they contacted Dr. McEwan at the Florida mission, to learn more about their ancestors. “We went slap busted doing this,” Mr. Bennett says, “spent everything we had, which wasn’t much.” They later secured small grants to hire a researcher and buy office equipment. But their task was made harder by the reluctance of some Apalachee to cooperate. “We’ve had so much trouble in the past that people don’t trust the government to help rather than hurt us,” says Alex Tall Torres, a member of the tribal council.

To win federal recognition, Indians must document, in essence, that they’ve been part of a distinct and intact tribe through the centuries. Donald Hunter, a Baton Rouge archaeologist and ethno-historian who has studied the Apalachee, says, “They’re still very much Indian, they’re the real folks.” He believes the band has a better claim to tribal status than some groups who have already been recognized.

However, the recognition process is slow, highly politicized, and complicated by new legislation enacted in 1988 that allows tribes on certain lands to open casinos. Gaming is a divisive issue that pits states and church groups against Indians — and aspiring tribes against ones already recognized who fear competition. The Bureau of Indian Affairs also has a huge backlog. Only 57 of 302 petitions for tribal status have been resolved since 1978. The Apalachee claim, filed in 1997, remains in limbo.

Mr. Bennett is still hopeful, though he resents the Catch-22 legalese of the recognition process. A typically worded provision, Criterion 83.7 (a), requires “External Identification of the Group as an American Indian Entity on a Substantially Continuous Basis since 1900.” This is hard for the Apalachee to document since they went underground to survive. “All those many years, we suffered for being Indian, so we hid who we were,” Mr. Bennett says. “Now that it might do us some good to be Indian, the government wants to know where we’ve been all this time.”

In another sense, though, the Bennetts have succeeded. After centuries of being persecuted for their heritage, the Apalachee are now celebrated for it. Other tribes include them in pan-Indian ceremonies. The city of Tallahassee and the county it occupies have officially recognized the Louisiana band as descendants of Florida’s Apalachee.

The Bennetts often drive to Mission San Luis to consult on the reconstruction of Apalachee buildings and to donate memorabilia. “They’ve given a human face to what we do,” says the mission director, Dr. McEwan. “And the Bennetts have taught me a lot about how to handle life’s struggles — and history’s — with poise and dignity.”

Those qualities were on display last year, when Mr. Bennett spoke at a somber event marking the 300th anniversary of the mission’s end. “I could stand here and tell you about all the hardships we have endured over the past 300 years. This would do no good,” Mr. Bennett told assembled dignitaries. “One day, all of us will face our maker. He said he would know us by our work. We, the Apalachee, have always tried to be people of good character, and walk with the Great Spirit to preserve our land, water, air and nature that God trusted to us.”

Mr. Bennett recently had quintuple-bypass surgery and nearly died. He knows he may not live to see the Apalachee win full recognition. But recalling his speech last year in Tallahassee, he takes off his glasses and wipes his eyes. “I’m not the wooden Indian, the dummy in the back of the class,” he says. “Not anymore.”