Wyandotte (Huron) Creation Legend and How the Sun was Made

In the beginning, the people were all Wyandots. They lived in Heaven. Hoo-wah-yooh-wah-neh, The Great Spirit or mighty chief, led them. 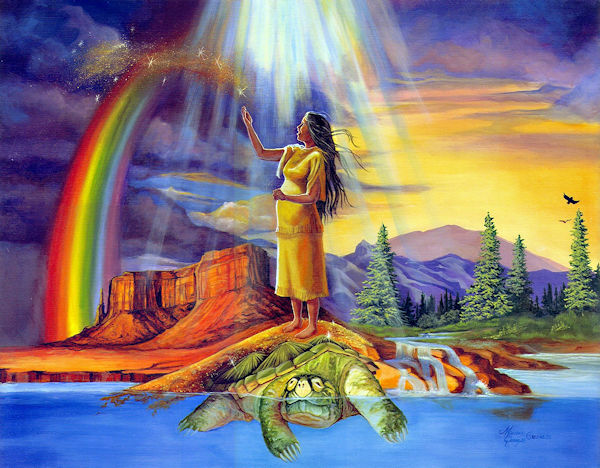 Long ago this world was almost covered with water. There was only a little land. The people lived in a world above the sky. These people were Wyandot Indians.

This skyland was a strange world. For it had no sun nor moon nor any stars. It had no need of these, for it was lighted by a great tree which stood near the lodge of Hoo-wa’ neh, The chief of the Upper World.

Upon this tree grew large yellow flowers. It was thickly covered with them. From these yellow blossoms came the light of that land; and there was no night there.

This Tree of Light was holy. No one, save the priests, was ever allowed so much as to touch it. But one day, when Hoo-wa’ neh was away hunting, his wife took some of the yellow flowers and ate them.

At once she knew she had done a great wrong. She was afraid of what her husband might say to her. So she ran away to her own people, who were the priests, or hookies. And she was sick from having eaten the flowers.

Hoo-wa’ neh knew that some one had touched the Tree of Light, for a twilight came over the Upper World. He went home from his hunt. When he heard what his wife had done, he was very sad.

He tried to cure the Tree of Light and make it bright again. For many days he lay upon his face on the ground before it. He would not eat. But the Tree was not cured.

Then he told the priests to make his wife well. They said that what she needed to make her well would be found among the roots of the Tree of Light.

So they brought the sick Woman and laid her down upon a mat at the root of the Tree. Then they began to dig by her bed to find that which would cure her.

The priests, or hookies, had dug but a little while when, all at once, the Tree of Light and the ground around it sank down. The Tree had broken through the Upper World.

The Woman was caught in its branches. Both Tree and Woman fell through the sky. This rent in that broken land closed over them, shutting them out of that beautiful world above the sky.

Two Swans were swimming in the Great Water which covered the Lower World. Heno, the thunder god of the Wyandots, who came with the Woman, rolled a great crash of thunder over the waters. The Swans were alarmed, for they had never before or heard so frightful a sound. Nor had they ever seen a light so brilliant.

They looked up. They saw the Woman as though standing in the rent of the broken sky. She was taller than the highest tree. Her arms were spread upward. She shone as brightly as the sun at noonday.

One Swan said, “What shall we do with this Woman?”

We must take her on our backs,” the other said.

These Swans were very large. They swam side by side, and the Woman fell upon them. They carried her over the Great Water.

At last the first Swan said, “What shall we do with this Woman? We cannot carry her forever.”

The other Swan said, “We must call a Council of all the swimming Animals, all the water tribes.”

And so they did. This was the first Great Council. The Big Turtle was the chief or leader. He did not know what to do. None of them knew. There was no place in all the Great Water where the Woman could live.

The Tree of Light had fallen into the sea. There it lay on the bottom of the Great Water with the broken earth about it shining like the sun.

After all the Great Council had talked, the Big Turtle said, “If you can get a little of the shining earth which lies at the root of the Tree of Light, you may place it upon my back. There it will grow into a world, and the Woman may live in it.”

One after another the Animals dived into the great deep to bring up the earth. They could not get it. Some of them were drowned. Then the Toad said she would try.

She was gone a long time. She was dead when she came up, and she floated upon the water. But her mouth was filled with shining earth.

The Little Turtle carefully spread this earth around the edges of the shell of the Big Turtle. There it grew at once into the Great Island. The Woman arose from the backs of the Swans and lived upon it.

The Big Turtle stands yet on the bottom of the Great Water with the Great Island upon his back. And it is the land in which we live today. And this Great Island was called the Lower World.

Because the Toad was the only Animal which could get the earth from the bottom of the great deep, she was loved by the Wyandots. They call her their Grandmother.

How The Sun Was Made

The Woman who fell down from Heaven was unhappy on the Great Island. She was alone. There was no one to whom she could speak. She wept and wrung her hands. She was sorry she had done wrong. She had lost her country. She had lost her home and her husband. She wanted to go back to the land above the sky.

One day Hoo-wa’ neh heard her weeping. She was his lost wife. He had great pity for her. He could not take her back to the skyland, but he told her what to do.

The Woman did just as he said. She went into the hills. She came to a place where tall trees grew. It was like a beautiful park. A clear, swift river ran there, and the leaning trees along its bank made shadows on the water.

From the hill the Woman looked far off. She saw an Indian lodge in a clump of trees on the river bank. From its top rose the smoke of a fire. She came to the lodge, and she sat on a stone before its door. A woman came out to speak to her. It was her mother. She had been sent there by Hoo-wa’ neh. So the Woman lived with her mother and was happy.

Before the Woman came, all the Lower World was dark. Now the Woman was its light. But when she went into the lodge, darkness fell again over the earth.

Having had the light of the Woman, the Animals did not like this darkness. They called the Great Council to plan how they might have more light. The Little Turtle said, “Let me go into the sky. I will put a light there to shine so that we shall not be in darkness when the Woman goes into the lodge.”

All the Animals thought this a good plan. A cloud, black and terrible, was called down. Heno rode in it. Harsh thunder and red lightning came out from it. The Little Turtle went into the cloud, and was carried away into the sky. There she took the lightning and kindled a great fire, which we call the sun.

This sun stood still in the middle of the sky. Its light did not reach the far sides of the Great Island. At the lodge of the Woman the heat was too great. Something had to be done about this.

Then the Animals made the sun alive so that It could move about in the sky. The Mud Turtle was directed to dig a great hole or way through the Great Island. The Sun was made to go by a certain path across the sky every day.

Through the hole he went under the earth each evening, making night when the Woman was in the lodge and the Animals, the beasts, and the birds could sleep. Then the Sun rose again in the east, bringing a new day to the world.

This hole or passageway which the Mud Turtle dug from side to side through thc Great Island was more than a mere tunnel. It was almost as broad as the Great Island itself. It had a sky and stars and clouds.

Heno sent one of his sons to live there and make the thunder. There were rivers and lakes and seas in that land.

Fishes were in the rivers, and great fishes swam in the lakes and seas. There were trees and grass and corn, beans, pumpkins, and squashes in that beautiful country. The same animals found in the Great Island lived there, also.

All the Animals of the Great Council were gods. The Mud Turtle was one of the greatest of these and created the Little People to live in the Under World. It was called the Land of the Little People. And it became the country of the dead for the Wyandots -their happy hunting grounds.