A California University grapples with this question over a dispute between a native American student and the university’s history professor. 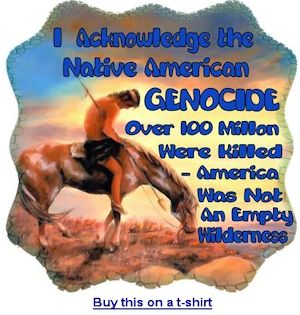 Sacramento State University said Monday a student who firmly disputed a history professor’s interpretation of genocide was not expelled from the course for her conduct as initially reported. History professor Maury Wiseman ended class early Friday after Native-American student Chiitaanibah Johnson allegedly hijacked the class by presenting her argument for why genocide is an apt description of what happened to native people at the hands of European colonizers and their descendants.

“The university would like to make it clear that our student, Chiitaanibah Johnson, was not expelled or disenrolled from this history course. Under university policy, a professor cannot unilaterally disenroll a student from a class,” said a statement released Monday by President Robert S. Nelsen, who said he is investigating what happened before taking any action.

Johnson told Indian Country Today Media Network in a report published Sunday Wiseman told the class he doesn’t believe the subjugation and treatment of the native population rose to the level of genocide.

“He was talking about Native America and he said the word genocide,” said Johnson. “He paused and said: ‘I don’t like to use that word because I think it is too strong for what happened,’ and ‘Genocide implies that it was on purpose and most native people were wiped out by European diseases.’ “

The debate over how to interpret the treatment of Native Americans flared on the national stage when the Republican National Committee passed a resolution in August 2014 demanding an investigation into advanced high school history classes for what the RNC called a biased interpretation of America’s past. They criticized the way the curriculum focused on the negative effects on Native-American populations from the western expansion of white settlers. So far, no public school curriculum teaches students Native Americans were victims of genocide.

Genocide is typically ascribed to events like Russia’s Great Purge of the 1930s (1.2 million killed), the Jewish Holocaust of the 1940s (6 million killed), Cambodia’s Khmer Rouge “purification” campaign in the 1970s (2 million killed) or the Rwandan slaughter in the 1990s (1 million killed). These genocides are characterized by vast amounts of organized mass killing within short periods of time.

A debate lingers in the U.S. over how to characterize the decimation of the native population. By some estimates, the North American native population dropped from 12 million in 1500 (some estimates say as high as 100 million), eight years after Christopher Columbus accidentally bumped into the Americas on his way to Asia, to fewer than 300,000 by 1900. Most of those deaths happened early and were biological — Native Americans didn’t have immunity to diseases the European colonizers carried with them.

But proponents of the genocide line point out the definition of genocide includes certain aspects of what was inflicted on Native Americans, including cultural repression in Native-American boarding schools and the forced removal of entire populations from their native lands.

The United Nations defines genocide as “any of the following acts committed with intent to destroy, in whole or in part, a national, ethnical, racial or religious group, as such: killing members of the group; causing serious bodily or mental harm to members of the group; deliberately inflicting on the group conditions of life calculated to bring about its physical destruction in whole or in part; imposing measures intended to prevent births within the group; [and] forcibly transferring children of the group to another group.”

Some of the things Europeans did to native americans:

–Directly killed members of the group, both through warfare and offering bounties for their scalps, including women and children. In California, miners used Indians for target practice. Military personel deliberately distributed blankets infected with small pox to native American tribes. Whole sleeping villages were massacred and burned for crimes committed by others.

–Forcibly moved them off their lands, often on long marches to foreign lands that caused serious bodily harm and even death, as well as mental harm to members of the group.

–Killed off the buffalo to remove their primary food source, driving an animal that once numbered about 60 million to the brink of extinction in a 20 year period. Then crooked agents stole their food rations on early reservations, leaving them to starve.

–Removed their children to boarding schools, where they were forbidden to speak their native language

–Made their religion illegal to practice as late as the 1960s. Made it a crime to posess symbols and sacred objects of their religion. Nearly 300 native americans were killed for practicing their religion (the Ghost Dance).

–A study by the U.S. General Accounting Office finds that 4 of the 12 Indian Health Service regions sterilized 3,406 American Indian women without their permission between 1973 and 1976. The GAO finds that 36 women under age 21 had been forcibly sterilized during this period, despite a court-ordered moratorium on sterilizations of women younger than 21.

What do you think? Is this genocide?