Filmmakers take note; if you’re looking for an actor to hold up your
Western, call Steve Zahn. With that out of the way, the long awaited
prequel to the popular Lonesome Dove books-turned-mini-series debuted on
CBS on Sunday, January 13.

After a quick prelude of a Comanche uprising on Yankee troops, the story travels back in time to 1858 to Call and McCrae as they’re being led across the land by wealthy Mexican-war-hero turned Northern aristocrat Inish Scull (Val Kilmer) on a hunt for notorious Comanche horse thief Kicking Wolf (Jonathan Joss).

After several Indian uprisings, the efforts of securing the land were left up to the Texas Rangers, which, as the mini reveals, was often made up of a motley collection of gritty, hard-living, whiskey-drinking average westerners. 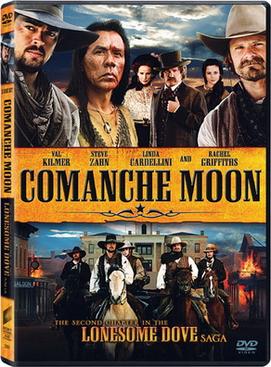 As Comanche Moon works its way through the three main storylines, it also takes a side turn to explore life in Austin, Texas where Woodrow’s girl Maggie (Elizabeth Banks), a former prostitute, and Gus’ love Clara (Linda Cardellini) wait for their men to
return.

Although Comanche Moon doesn’t come close to topping Lonesome Dove, the original ’80s min-series that arguably went on to become one of the best of all time alongside Roots and Shogun, the fact is that it’s now nearly impossible replicate the same success in a completely different generation.

Today’s TV viewers aren’t the same as ’80s TV nuts and the entire television landscape isn’t what the medium was twenty years ago. While Karl Urban and Steve Zahn aren’t the second coming of Tommy Lee Jones and Robert Duvall, the face of network television has changed so much in the two decades since Lonesome Dove that it’s clear the “must-see event” aspect of the mini-series had its day in the sun.

To a large degree, certainly for viewers in today’s 18-34 demo, Comanche Moon will be a stand-alone project with no relatable history.

If you don’t remember or weren’t around to share in the magic of the original Lonesome Dove, Comanche Moon will propbably be just another TV Western. On that line of thought, it’s a shame Lonesome Dove die-hards had to wait so long.

To its credit, aside from the stunning cinematography and beautiful imagery, several elements work in favor of Comanche Moon. The entire mini-series is held up by Steve Zahn and his amazing authenticity as a Western character.

Zahn is so natural in the role of a pre-Civil War westerner that his organic accuracy serves as the entry point into the story and surrounding characters.

It’s Zahn’s comfort within the genre and in the shoes of Gus McCrae that makes the entire journey worthwhile from an acting standpoint. As well, Zahn’s relationship with Clara adds a deeper but highly believable emotional layer, which rewardingly supports the main storyline and tugs at the heartstrings.

It’s a relationship that mirrors the real challenges many couples face today. How can a relationship survive when a partner is often on the road and away from home for days and weeks at a time?

Will your girl still be “your girl” when you get back home? Can a hard-living free spirit really settle down to become a family man?

Underneath the chase, the heartbeat of Comanche Moon at the outset is fuelled by the deeply emotional relationship between Gus and Clara.

Another aspect of Comanche Moon that works is the initial introduction of
the relationship between the Comanche and Mexicans.

It’s not often that movie-goers get to see the other side of the Western frontier where battles were fought that excluded the white man. That particular aspect of the mini
feels like fresh, new, and unexplored territory for the genre.

However, after being introduced to the sadistic “south ‘o the border” banditos, as
fresh as the wary Mexican-Comanche relationship is in the early stages, the level of viscious, over-the-top violence and torture adds an uncomfortable and unnecessary layer that awkwardly gets in the way, especially when Inesh Scull is captured and held for ransom.

It’s a case of violence for the sake of shock value instead of character conflict on a more believable dramatic level.

Although much of the language and dialect of the Old West was a hodge-podge of European and bastard New-World English, Val Kilmer’s portrayal of Inish Scull might be a hard pill for most to swallow.

While Kilmer plays one of the most awkward characters of his career, his approach to the eccentric, poet of a man lends itself much more to the stage than the small-screen.

The buy-in factor might be too tough for mainstream viewers since Scull not only spits poetry and sings, but he also doesn’t appear to be grounded in any relatable real world that would justify his revealed background as one of the greatest war heroes of the era.

Also out of place in his first Western is Karl Urban in the role of Woodrow Call, who, as Inez Scull reveals on the first night, is “too stiff.” If the town-slut won’t sleep with you, you know you’re in trouble.

Unfortunately, despite the inherent stiffness that the role called for, Woodrow Call isn’t interesting enough to really care about. You certainly want to care, but the guy’s just too
wooden, especially in the mini’s first installment.

Although we learn in the latter stages of the first night that Call is in love with a former
prostitute, Urban’s relationship with Elizabeth Banks is overshadowed by the sincerity of Gus and Clara. If anyone, it’s Maggie who we care about more.

There’s a lot going on at once in Comanche Moon (too much), but it is interesting to note that the mini does attempt to tackle the issue of just how badly women of the time were treated.

As reflected throughout the mini-series, many women were nothing more than objects and targets of sexual, physical, and mental abuse.

However, although Comanche Moon gives viewers insight into the time from both the female and the Comanche perpsectives, the mini-series forsakes the deeper dramatic territory that made Lonesome Dove such a success in favor of action, physical conflict and
some of the more standard cliches of the genre.

Comanche Moon is a mixed bag filled with highs and many lows, but the first installment largely falls victim to a wide generation gap and an era fuelled by digestable entertainment. If you loved the original Lonesome Dove mini-series, you’ll definitely want to catch the entire run.

If you’re coming to it fresh without any legacy of the original, the mini will probably feel too fractured. Look for original mini and the prequel intersect on Tuesday night when Call and McCrae encounter the early beginnings of the town called Lonesome Dove.