Tonantzín Carmelo is an American actress descending on her mother’s side from Tongva and Kumeyaay Native Americans of Southern California.

She grew up performing in a Native American dance troupe led by her mother, Virginia Carmelo. Her father is a Latin musician. Tonantzin Carmelo is a traditional Aztec dancer and pre-Columbian musician, and has recorded 3 CDs with Canyon Records. She sings lead and back up vocals with the band Trio Del Alma.

Tonantzin  received her BA from UC Irvine in Environmental Anaysis and Design with a minor in Dance. 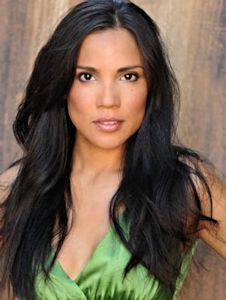 She has since appeared in theater productions and independent films such as Victoria Roubideaux in Eventide at the Denver Center for the Performing Arts and as Ms. Yellowtree in Carbon Black at Native Voices at the Autry.

She established herself as a leading actress with her break-out performance as Thunder Heart Woman in the Emmy-winning Steven Spielberg miniseries, Into the West and  made her mark as a motion-capture/voice-over artist playing the villainous Kendra Daniels in the EA Game franchise Dead Space, which sold over two million copies. She adds to her voice-over credits by taking on the lead role of Roxanne in Ubisoft’s The Crew.

Carmelo is an award-winning and multifaceted actor who is cast in Westerns, Sci-fi, and everything in between. Her diverse body of work includes lead and supporting roles in over a dozen indie features films, most notably in the festival favorites Imprint, Unearthed, and Shouting Secrets. She topped the “The Hot List” of must-see native actors in the national news publication Indian Country Today.

Her prime-time television guest-starring credits include CSI, Dragnet, and Dark Blue and American Dad! She is in national commercials and starred in the feature film King Rikki with Jon Seda and Mario López.

Maxim Magazine also named her character Kendra Daniels on a list for the Hottest Video Game Babes of the year.

Tonantzín is an Emerging Voice with the California Indian Storytellers Association and a mentor for the Native Voices Youth Playwright Project.