The War Dance cannot function as it once did, but it is one of the principal features of a pow wow. Traditionally, the War Dance was a major event in itself that was performed after a battle to record the brave feats performed in battle, or to prepare for an upcoming battle. 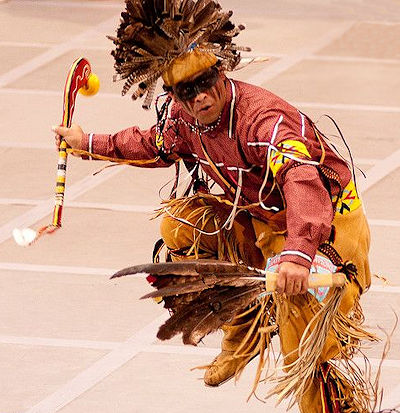 In the old days, the women welcomed the warriors home when they were first spotted from a distance with high pitched, trilling sounds. This is the sound most people today would recognize as the “war whoop” heard in old western movies. In reality, men did not make this sound. Today, women who want to honor a particularly good dancer at a pow wow may make this sound as an honor call.

The men returning from war remained outside the village to clean themselves and prepare for entry into the village. Then the warriors entered the village in a procession, each acting out his exploits in battle through dance. Through his movements of stalking and subduing the enemy, each told his personal story.

War dances, often using weapons and fighting movements, were used throughout history as a way of training young warriors and preparing them emotionally and spiritually for battle.

In the old days, many tribes practiced a War Dance on the evening before an attack

Many tribes practiced a War Dance on the evening before an attack to observe certain religious rites to ensure success. The warriors took part in a war dance while contemplating retaliation and the dance stirred emotions and filled the braves with a profound sense of purpose as they prepared for battle.

Though the ceremonies varied from one tribe to another, there are common points among many including singing, often extending over an entire day and night, interspersed with prayers, handling of sacred objects or bundles, and occasional dancing.

Often a sweat lodge or other purification ceremony was also held, incense burned, faces might be painted, and a pipe was frequently passed between the participants.

Generally, the only musical instruments used in these ceremonies are rattles, drums, and whistles.

In the Pacific Northwest, the Pueblos of the Southwest, and the Iroquois of the Woodlands, participants often were dressed and masked to represent the various gods or supernatural creatures who acted out parts of the ritual.

Today, the War Dance is a demonstration of dancing ability and is a major contest dance category at modern pow wows.

The generous monetary prizes given for this contest encourages War Dance skill. The War Dance for the contemporary American Indian does not exclude women and is a main part of all competition pow wows, sponsored by many tribes.

War Dance names vary among Indian communities, with the Fancy Dance incorporating war dance rituals of the Kiowa, Cheyenne, Arapaho, Comanche, and Kiowa-Apache tribes. To the Shoshone and Arapaho tribes, the wolf is symbolically linked to a warrior and the ritual is called the “Wolf Dance.”

The Lakota Sioux ‘Omaha’ dance is named after the Omaha tribe, who taught the dance to the Lakota, and the war dance is known to Utah’s Paiute tribe as the Fancy Bustle, in reference to part of the dancer’s outfit.