The Kiowa Gourd Dance was once part of the Sun Dance

Inspired both by legend and history, the gourd dance ceremony is an essential part of the Kiowa people.

The first thing to know about the gourd dance is that unless you’re Kiowa, you probably haven’t seen it—even if you think you have. 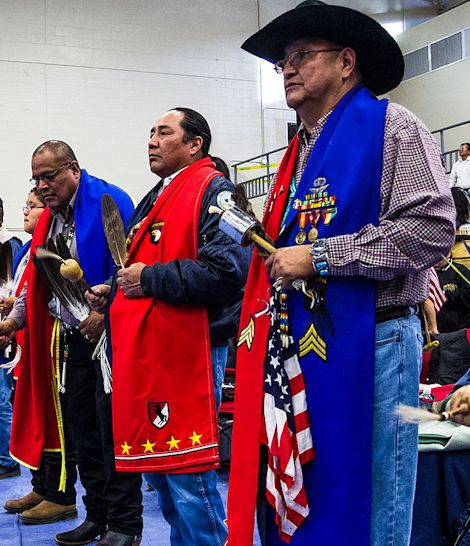 Make that the Tdiepeigah, which loosely translates to both skunkberry and brave and is the name used by the Kiowa instead of the generic term gourd dance; the gourd refers to a rattle.

Whether you attribute Tdiepeigah to the Kiowa warrior who was taught the songs by a red wolf who instructed him to teach them to his people, or to the honoring of battles fought by Kiowa warriors during their migration from the northern plains to what is now Oklahoma, both oral history and flesh make it clear this is a warrior dance.

Elements of the gourd dance were originally part of the sun dance, which was banned by the federal government in the late 19th century. Fast-forward to Armistice Day 1946: The gourd dance was revived for the first time in 20 years, at a ceremony honoring Indian veterans in Carnegie, Oklahoma.

This prompted another revival in 1955 at the American Indian Exposition in Anadarko, Oklahoma.

“The sound and sight of this ceremony that had been repressed moved many of the elders to tears,” said Dennis Zotigh, a Kiowa Gourd Clan member whose great-grandfather, Harry Hall Zotigh, was one of the revivers of the dance. Thus, the Kiowa Gourd Clan was born.

Being a great warrior is no longer a prerequisite to gourd clan entry; bringing honor to the Kiowa people is. The Kiowa Gourd Clan counts lawyers, doctors, and a Pulitzer Prize winner in its ranks (author N. Scott Momaday).

As for the dance itself, as done by the Kiowa, it’s less dance than ceremony, spanning hours to days. Only men dance in the arena; women gather behind the dancers and gently move to the beat.

The dance is spirited and meaningful, yet has little movement. The songs
matter as much as the steps: “If you listen to the Kiowa gourd dance songs very closely, you can hear the wolf yelp—that yelping sound Gui-Goodle-Tay (Red Wolf) had made out there when he was singing, and at the same time a holler or shouting sound at the end of the song that the warriors made on their journey,” says Andy Cozad, member of the Kiowa Gourd Clan and the Cozad Singers.

Cozad proudly said that his family has the right from direct lineage to participate in this dance, through names including Red Wolf, Heap O’Bears and Kiowa Charley.

At Kiowa Gourd Clan dances, non-Indians are not permitted to dance; members of other tribes, if invited by a clan member, may join.

Today, the preeminent gourd dance, according to Kiowa Gourd Clan member Tom Spotted Horse—is a three-day affair held around July 4 every year in Carnegie, Oklahoma. The date was chosen not because of Independence Day but because it’s the same hot time of year when the sun dance would have taken place.

“It’s kind of beautiful to have this dance arbor, knowing that the Saturday prior to the dance, there’s a work day for all the gourd clan members to erect it,” Zotigh said. “It’s a unique community event, kind of a renewal.”

Chances are that if you’ve seen a gourd dance, it isn’t the Tdiepeigah. Loosely interpreting its warrior origins, the gourd dance has taken on a second life as a veterans’ dance at or before pow wows.

“That’s part of the evolution of the dance, to ensure it doesn’t remain static,” Zotigh said.

“This interpretation was changed by those who are not Kiowa.” Yet cultural preservation of the Kiowa gourd dance remains essential: When invited to join the Kiowa Gourd Clan, elders give inductees strict guidelines.

“Our now long-gone gourd clan leader, Taft Hainta, sat me down, and—I’ll never forget this—he said, ‘Nephew, this dance, when we dance, it isn’t really for ourselves,” Spotted Horse said. “‘We dance for those who went before us. We’re dancing for them.’ I think about this to this day when I dance.”

Zotigh said he’ll go with the flow of the dance’s evolution—as long as it maintains its cultural integrity. “I’d like to see young people continue to take it seriously and heed the words of the elders and keep it as close as we can to the original protocol,” he said. “Simplicity can be beautiful.”