The Apalachees of Northwest Florida from Mission San Luis

From at least A.D. 1000, a group of farming Indians was living in northwest Florida. They were called the Apalachees. Other Florida Indians regarded them as being wealthy and fierce. Some think the Apalachee language was related to Hitchiti of the Muskhogean language family.

The Apalachees’ territory extended from the Aucilla River in the east to the Ochlockonee River in the west. Its northern boundary extended to what is now the Georgia state line, and its southern border was the Gulf of Mexico. Settlements within Apalachee Province were concentrated in today’s Leon and Jefferson counties.

Prior to European contact, there were probably at least 50,000-60,000 Apalachees. They were a strong and powerful chiefdom living in widely dispersed villages. Their leaders organized their work, and much of their social, ritual and political life as well. Other tribes respected the Apalachees because they belonged to an advanced Indian civilization, they were prosperous, and they were fierce warriors. As with other Native Americans, they attacked their enemies in small raids and ambushes, and scalped their enemies.

Traditionally the men wore deerskin loincloths and women wore Spanish moss skirts. When preparing for battle, the men painted their bodies with red ochre and put feathers in their hair.

The Apalachees played a ball game that was a religious exercise as well as a sport. One village would challenge another to a match, and the two teams would have up to 100 players each. They used a hard clay ball (about the size of a golf ball) covered with buckskin. Players propelled the ball with their feet toward the goal post which was a pole topped with a stuffed eagle in a nest. They played the ball game in the spring and summer, and dedicated it to the gods of rain and thunder to ensure rain for their crops.

One characteristic of precolumbian Apalachee society was their large ceremonial mounds. Some of the mounds had structures on top, and it is generally believed that the largest mound within a complex was the site of the chief’s house. Lake Jackson was the Apalachees’ capital and preeminent mound center in late prehistoric times. 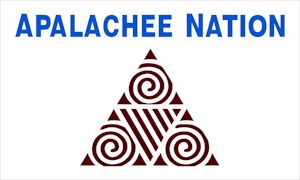 An expedition led by Pánfilo de Narváez in 1528 was the first group of European explorers to make contact with the Apalachees. Narváez came to the Tallahassee area searching for gold on the advice of Indians in the Tampa Bay area where he landed.

More than a decade later, in 1539, Hernando de Soto wintered in Apalachee Province. His expedition members stayed in the sixteenth century Apalachee capital village called Anhaica. Both groups of Spanish intruders received a hostile reception and were under almost constant attack from the Apalachees. The European presence eventually took its toll on the Apalachees from continual skirmishes and, eventually, contagious diseases that were introduced by the explorers.

Apalachee rulers requested Spanish friars as early as 1607 when epidemics and the threat of foreign attacks brought about a loss of faith in the traditional customs and leadership. Between 1633 and 1635, as least 5,000 Apalachees converted to Catholicism.

The de Soto-era capital, Anhaica, became one of the first missions established in Apalachee Province around 1633, and was eventually relocated and renamed San Luis de Talimali. Between 1656 and 1704, San Luis was a principal village of the Apalachee Indians and the Spaniards’ westernmost military, religious, and administrative capital. More than 1,500 Apalachee Indians and Spaniards lived at the mission.

What Happened To Them?

Following a series of devastating attacks on Spanish Florida by the British and their Creek Indian allies, Mission San Luis was burned and abandoned by its residents on July 31, 1704. Some Apalachees, who were not killed outright or enslaved, migrated north in to Creek territory. Others moved east to St. Augustine with the Spaniards or temporarily relocated in Timucua Province before eventually resettling in St. Augustine.

Most of the Apalachees from Mission San Luis moved westward in 1704, accepting an offer to live in French-controlled Mobile. In 1763, most of these Apalachees relocated to Rapides Parish in Louisiana. Today, 250 to 300 of their descendants still live there. They are the only documented descendants of any of Florida’s prehistoric native populations.

Mission San Luis has an ongoing program of archaeological and historic research, and is also in the process of developing a living history program. The 60-acre park is gradually being transformed into Florida’s only recreated 17th century mission.

Mission San Luis is open to the public Tuesday through Sunday (closed Monday) from 10 AM to 4 PM. Admission is free.

The Lake Jackson Mounds State Archaeological Site, on Lake Jackson, is also owned by the State of Florida. It was the Apalachees’ prehistoric capital and originally consisted of at least six platform mounds and a village. It is one of Florida’s most important archaeological sites and is open for visitors to hike and explore.

The Lake Jackson site is open everyday from 8 AM to sunset. Admission is free.