AUTHOR: by Amanda May Whistle

When Sitting Bull drew Self-Portrait in Battle in 1874, two years before
the Battle of Little Bighorn, he drew himself not only as he was, but also
how he saw himself spiritually.

Sitting Bull proclaimed he’d had a vision of US soldiers being defeated as they tried to overtake the sacred Sioux
territory. Leading more than 3,000 Hunkpapa Lakota warriors in 1876, he
routed General George Custer and the US Army in the Battle of Little Bighorn in one of the last great battles of the Indian Wars between the United States and sovereign Indian nations.

The United States would soon retaliate, and, eventually, force Sitting Bull
and his tribe to surrender. But that was in the future. 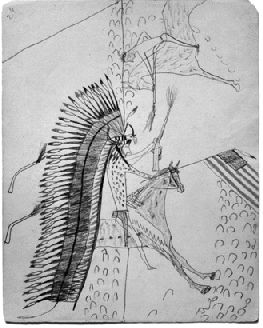 Here, he draws
himself in his war bonnet, armed with a triple-bladed club and riding a
horse streaked with war paint. He charges forward, firing his rifle and
clasping an American flag. Why Sitting Bull, who felt betrayed by the US,
depicts himself with the Stars and Stripes is one of the delicious
mysteries of the drawing.

Self-Portrait in Battle is part of “Myth and
Reality: The Art of the Great Plains,” on view through December 30 at the
Fenimore Art Museum in Cooperstown, New York. The exhibit features selections from
the museum’s 800-piece Eugene and Clare Thaw Collection of American Indian
Art, which includes objects dating back 2,500 years.

The Fenimore Art Museum is located at 5798 State Highway 80, Cooperstown, NY 13326, which is one mile north of the Village of Cooperstown on the west side of Otsego Lake. From the traffic light in the Village, follow Route 80 east approximately one mile.