The Seminoles of Florida call themselves the “Unconquered People,” descendants of just 300 Indians who managed to elude capture by the U.S. army in the 19th century.

The Seminole Tribe of Florida (The linking structure on this site is difficult to follow, but if you click around until you find the Site Map link, there is a wealth of information here.)

The 1770s is when Florida Indians collectively became known as the Seminole, a name meaning “wild people” or “runaway.”

The “Seminoles,” “Creeks,” and “Mikisúki” (the modern Tribe spells the word “Miccosukee”) are all descendants of the Maskókî-speaking peoples (possibly 400,000 of them) who lived in towns and villages across what are now the states of Florida, Georgia, Alabama, and parts of South Carolina, Tennessee, and Mississippi, when the first Europeans arrived in 1510. The Choctaws and Chickasaws are descendants of these peoples also.

Lineal Descendancy from someone listed on the 1957 Tribal Roll, Blood Quantum with minimum of one-quarter Florida Seminole blood, and must be sponsored by a currently enrolled tribal member.

Charter:
Name of Governing Body: Tribal Council
Number of Council members: The Tribal Council is composed of a Chairman, a Vice-Chairman and Council Representatives from each reservation.
Dates of Constitutional amendments: In the late 1950s, a push among Indian tribes to organize themselves and draft their own charter began — this came as a result of federal legislation which allowed Indian reservations to act as entities separate from the state governments in which they were located. After surviving the first half of the 20th century through agriculture and by selling crafts, individuals saw that organizing as a constitutional form of government would be a positive step. The Seminole tribe improved their independence by adopting a constitutional form of government. This allowed them to act more independently. So on July 21, 1957, tribal members voted in favor of a Seminole Constitution which established the federally recognized Seminole Tribe of Florida.
Number of Executive Officers:

Today, the members of the Seminole tribe speak one or both of two languages: Maskókî and Mikisúkî. These are the only two left from among the dozens of dialects that were spoken by their ancestors here in the Southeast. Maskókî, erroneously called “Creek” by English speakers, is the core language. Mikisúkî is a dialect of Hitchiti, which was itself a dialect of the core language, Maskókî. Although Maskokî is spoken in Oklahoma as well as in Florida, Mikisukî is spoken in only one place on earth: in South Florida, by the members of the Seminole and Miccosukee Tribes.

The difference between the Seminole and Miccosukee Tribes is political, not cultural. In 1957, many of the Native Americans in Florida formed a political organization called the Seminole Tribe of Florida. Others, wishing to make political decisions separately, formed the Miccosukee Tribe of Indians of Florida in 1962. Today, there are also about 100 individuals living in South Florida, especially near the western end of the Tamiami Trail and the lower Gulf Coast, who qualify for membership in either Tribe but also choose to remain separate. They are referred to as “Independents” or “Traditionals.”

The Seminole people are best known for their colorful fabrics and patchwork shawls, beadwork, baskets, and wood carvings.. 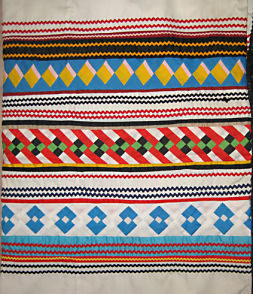 Open sided, palm-thatched dwellings are called chickees. The sides can be left open to catch the breeze during warm weather, or may have palm fronds also covering the sides in cold weather. They are still used today on pow wow grounds and in some of the more remote areas. In modern times, sometimes the sides are covered with plywood. Depending where the chickee is located, it may have a raised wooden floor to keep it above water or to help keep out insects and snakes. Seminole people who live in towns and cities live in apartment buildings or modern houses like everyone else.

The Seminoles work hard to be economically independent. To do this, they’ve jumped into a number of different industries. Tourism and bingo profits pay for infrastructure and schools on their reservations, while citrus groves and cattle have replaced early 20th-century trade in animal hides and crafts as the tribe’s primary revenue sources.

Seminole history begins with bands of Creek Indians from Georgia and Alabama who migrated to Florida in the 1700s. Conflicts with Europeans and other tribes caused them to seek new lands to live in peace.

Groups of Lower Creeks moved to Florida to get away from the dominance of Upper Creeks. Some Creeks were searching for rich, new fields to plant corn, beans and other crops. For a while, Spain even encouraged these migrations to help provide a buffer between Florida and the British colonies.

The 1770s is when Florida Indians collectively became known as Seminole, a name meaning “wild people” or “runaway.”

In addition to Creeks, the Seminoles included Yuchis, Yamasses and a few aboriginal remnants. The population also increased with runaway slaves who found refuge among the Indians.

Run-ins with white settlers were becoming more regular by the turn of the century. Settlers wanted Indian land and their former slaves back.

In 1817, these conflicts escalated into the first of three wars against the United States. Future U.S. President Andrew Jackson invaded then-Spanish Florida and defeated the Seminoles.

After passage of the Indian Removal Act in 1830, the U.S. government attempted to relocate Seminoles to Oklahoma, causing yet another war — the Second Seminole War.

After defeating the U.S. in early battles of the Second Seminole War, Seminole leader Osceola was captured by the United States in Oct. 20, 1837, when U.S. troops said they wanted a truce to talk peace.

By May 8, 1858, when the United States declared an end to conflicts in the third war with the Seminoles, more than 3,000 of them had been moved west of the Mississippi River. That left roughly 200 to 300 Seminoles remaining in Florida, hidden in the swamps.

For the next two decades, little was seen of Florida Seminole. At least not until trading posts opened in late 19th century at Fort Lauderdale, Chokoloskee and other places, that’s when some Seminoles began venturing out to trade.