Saginaw Grant  (born Morgan Saginaw Grant) is a respected member of the Sac-n-Fox,Iowa and Otoe-Missouria Nations. He is a a Native American actor, traditional dancer, and motivational speaker.His most recent role was in The Lone Ranger with Johnny Depp.

On July 20, 1936, Saginaw Morgan Grant was born to Sarah and Austin Grant Sr. at Pawnee Indian Hospital in Pawnee, Oklahoma. He was raised on a farm in Cushing,Oklahoma with two brothers and one sister.

Having a traditional upbringing by both parents, Saginaw was especially influenced by his grandparents. His grandpa Kirvin was a strong medicine man and his other grandpa Saginaw (whom he is named after) was also a very spiritual man. They taught Saginaw their customs,culture, and traditions and the importance of this way of life. As a result, Saginaw witnessed many special ceremonies and events taught to very few. 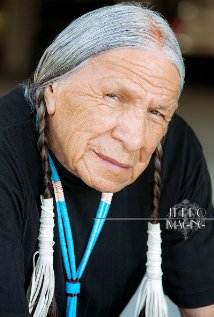 As a young adult, Saginaw experienced all the situations both good and bad every young person faces in today’s society. Yet he overcame the obstacles that challenged him, and with that he took his courage to become the man he is today.

He is an United States Marine.

During his life in Oklahoma he took on employment in various industries such as dry cleaning, also gaining knowledge and a better understanding in the Bureau of Indian Affairs, and other vocations in which he enjoyed interacting with people. This gave him the opportunities to hear different philosophies, beliefs and religions.

Grant said he never endeavored to be an actor. One day in the ‘80s, Grant was speaking at a seminar near San Francisco. A man approached him and asked if he’d like to play a role in a car commercial. Saginaw took the role and he’s been acting ever since.

He resides in the Southern California area, where he is called upon for counseling, lectures, and family events, while also pursuing his acting career.

Saginaw Grant’s most recent role was in The Lone Ranger, with Johnny Depp.  He played Chief Big Bear in the 2013 film. The same year, he appeared as a Native American man who sells his truck to Walter White in the Breaking Bad episode “Ozymandias.” Grant has appeared in numerous films and television shows.