Ruth Ziolkowski passes on at age 87

Ruth Ziolkowski, who has died aged 87 after a prolonged struggle with cancer, spent much of her life helping her husband, the Polish-American sculptor Korczak Ziolkowski, to achieve his dream of transforming a mountain in the Black Hills of South Dakota into a colossal sculpture depicting the 19th-century Oglala Lakota war chief Crazy Horse. 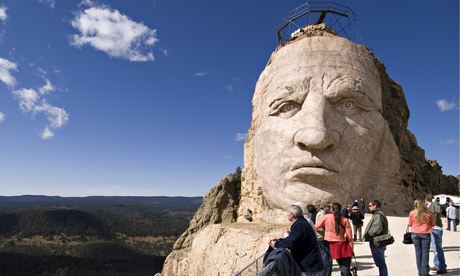 Visitors view the progress of the Crazy Horse memorial in the Black Hills of Dakota, a project taken on by Ruth Ziolkowski after the death of her husband, Korczak, a sculptor. Photograph: Sergio Pitamitz/Robert Hardi/Rex

When Korczak died in 1982, the project could have foundered; it had been in progress for 34 years and still, despite vast quantities of rock having been blasted away, the pink granite crag did not look even remotely like a warrior on horseback.

But Ruth more than made the project her own and, with help from several of the Ziolkowskis’ children and a charitable foundation, progress on the mountain accelerated. The first definable feature, the rider’s face, 26.67 metres (87ft 6in) high, was completed in 1998, in time for the 50th anniversary of the very first blast. Work subsequently began on the next phase – the horse’s head, 66.75 metres high. Although there is still no estimated completion date, Ruth never lost her faith that her husband’s vision would eventually be realised; she said her wish was to “live more years than possible because I would love to see it finished”.

The idea for the project was born in the 1930s, after Korczak helped on the final stages of construction at Mount Rushmore, where the faces of the US presidents George Washington, Thomas Jefferson, Theodore Roosevelt and Abraham Lincoln are carved into the landscape. He fell out with the project’s creator, Gutzon Borglum, and resolved to create a competing monument after he was contacted by the Sioux leader Henry Standing Bear, who said: “My fellow chiefs and I would like the white man to know the red man has great heroes too.”

Korczak designed the figure of Crazy Horse, who was one of the leading figures in the Native American defeat of General Custer at the battle of Little Bighorn in 1876, pointing towards his prairie heartland. The sculptor purchased the mountain, which is 17 miles from Rushmore, from the federal government and construction began in 1948. 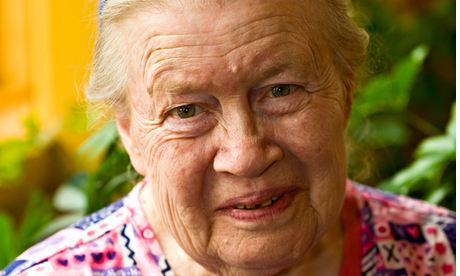 Ruth Ross met her husband, the sculptor Korczak Ziolkowski, when she was 13. Photograph: Alamy

Ruth Ross was born in West Hartford, Connecticut, and first met Korczak when she was 13. Later she was among the local students who helped him on a two-year project to produce for the town a 4.11 metre-high statue of Noah Webster, the creator of Webster’s Dictionary and a West Hartford native. It was completed in 1941. Six years later she joined him in the Black Hills as he prepared to start on the Crazy Horse project, which had been delayed by the second world war. The couple married in 1950.

While Korczak battled on the mountain, Ruth did just about everything else. As well as raising 10 children, she ordered equipment needed to shape the rock, managed the visitor centre, greeted sightseers and fielded growing numbers of media inquiries. She also ran the large dairy farm and timber mill that helped finance the early years; Korczak refused all federal funding, believing it would be an insult to Native Americans.

Ruth also assisted her husband in drawing up three books of comprehensive plans and measurements for the sculpture. It was vital preparation for the time when she inherited the project. Under her direction, targets were set and achieved – and more than a million people a year came to watch. She took the crucial decision to complete work on the figure’s face – Korczak had wanted to complete the horse first – as she believed it would aid fundraising.

When work on the horse’s head started after almost two years of examining the challenge from every angle, she declared: “The first hurdle was one of logistics – we have taken considerable time to measure and calculate the best approach to what will be an extraordinary and lengthy undertaking. We’ve been mindful of Korczak’s good advice to ‘Go slowly so you do it right’ as well as the old adage about the wisdom of measuring something six times before you cut it once.” 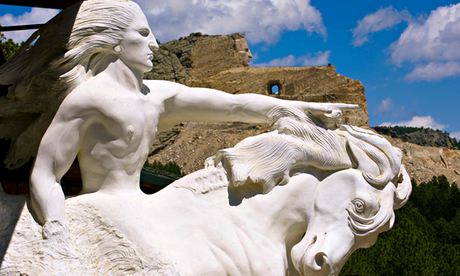 A model of the Crazy Horse sculpture with the work in progress in the background. Photograph: Alamy

As for the cost and timescale, Ruth believed there were too many unknowns to make any realistic projection other than a “conservative” estimate that carving the horse’s head could cost more than the total spent on the mountain during the project’s first half-century and that, taking into account weather and funding, it could take “perhaps decades”.

She felt that Korczak, who was buried at the foot of the mountain, would be “absolutely thrilled” with the way the work had advanced since the 1980s. Her dedication brought her many honours. After giving Ruth an honorary degree, South Dakota School of Mines and Technology presented the whole family with an outstanding public service award in 1998. Korczak Day is celebrated locally every year on 3 May, the anniversary of Korczak’s arrival in the Black Hills in 1947.

Visitors baffled by the scale of the project often asked Ruth to explain Korczak’s motivations. “He decided it would be well worth his life carving a mountain,” she said in an interview in 2006. “He felt by having the mountain carving, he could give back some pride. And he was a believer that if your pride is intact you can do anything in the world you want to do.”

She is survived by her children John, Dawn, Adam, Jadwiga, Casimir, Mark, Joel, Monique and Marinka; 23 grandchildren; and 11 great-grandchildren. Her daughter Anne died in 2011.