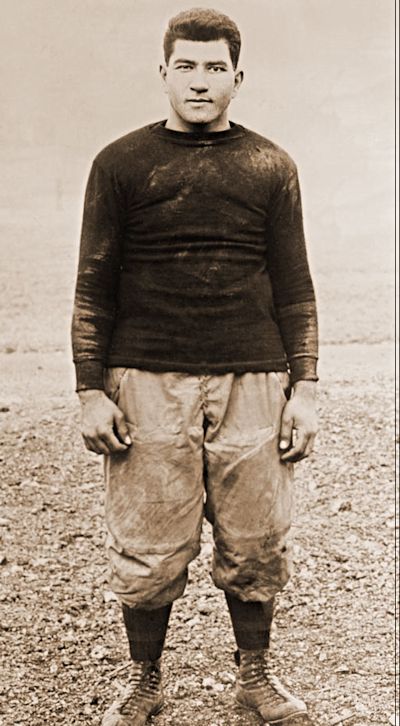 Philip “Woodchuck” Welmas in his Carlisle Indian School football uniform, taken in 1913.
Photo courtesy the Library of Congress.
Welmas attended school at Pala Day from 1897-1898, then transferred to a school in Riverside, California, which he attended for the 1898-1899 school year, graduating from the 2nd grade. School was in session for five months of each year at those schools.

He then left school to work and had no further education until he entered the Carlisle Indian School located in Carlisle, Pennsylvania, for a period of three years beginning on November 10, 1908, at the age of 17. He studied first to be a house painter. The college rated his skills to be “Good” at this profession. Then he was apprenticed to a harness maker from January 1 to June 30, 1910, who rated his skills as “Fair.”

He played the 1923 season for the Oorang Indians, a traveling team in the National Football League from LaRue, Ohio (near Marion). The franchise was a novelty team put together by Walter Lingo to market his Oorang dog kennels. All of the players were Native American, with Jim Thorpe serving as its leading player and coach.

The team played in the National Football League in 1922 and 1923. Of the 20 games they played over two seasons, only one was played at “home” in nearby Marion. With a population well under a thousand people, LaRue remains the smallest town ever to have been the home of an NFL franchise, or probably any professional team in any league in the United States.