Dr. Janine Pease appreciates what a gift “The Spirit of Indian Women” is to
her own daughter and granddaughter, as well as all other American Indian
women. The book, written by Judith Fitzgerald and Michael Oren Fitzgerald and
recently released by World Wisdom Publishing, is also a gift to non-Indians,
presenting a unique and ignored perspective on the thoughts, hopes and roles of
American Indian women from tribal nations across the United States.
Dr. Pease, Rocky Mountain College vice president for American Indian Affairs,
wrote the introduction. “This gift of voice and image allows us to travel
across time and cultures, to listen to, and to observe these beautiful mothers,
grandmothers, and matriarchs, all of them Indian women,” she writes.


The 156-page book is rich in the stories and lessons Indian women wanted to
pass on to future generations. An example of the oral tradition, transmitted
via songs and stories, is recorded from Otter Woman, of the Blackfeet, who
tells the story of how Indians once harvested a bountiful crop of tobacco. The
story is told, relating it to trapping beaver. When an Indian trapper’s wife
runs off with a beaver, the trapper fears he has lost not only his wife, but
the source of making a living.

Instead, a group of beavers return with his wife, bestow tobacco seeds as a
gift, present him a medicine bundle and instruct him about planting. The
relationship between humans and wildlife, between wildlife and sustaining
agriculture are interwoven, making it memorable. 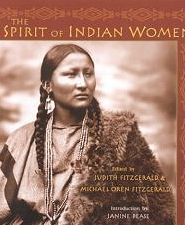 There are dozens of these kinds of stories. Susan Bordeaux Bettyloun, a
Lakota, tells of the origin of the peace pipe. Buffalo Woman, a Hidatsa, explains
how women were awarded beautiful broad beaded shawls. Pretty Shield, an
Absaroke, describes how men and women courted, and how marriages were never
allowed within the same clan, fending off the intermarriages that would have
produced weak offspring.

The stories are not limited to the Plains Indians. Stories and songs are
culled from Indian women across the United States, including Hopi, Mandan, Zuni,
Navajo, Pawnee and myriad others.

The book is also rich is photographs of Indian women, many secured from a
private collection and rarely seen before. Many have never been published.
As Dr. Pease notes, despite the critical role they played in Indian society,
Indian women are virtually ignored in history, even Indian history where the
“invisible, silent status” typically conveyed in history and literature
ignores the significant role Indian women had.

“American Indian women are virtually ignored by the historians,” Dr. Pease
writes. Instead the focus is on the men’s leadership, their warrior exploits,
and their leadership.

” The Spirit of Indian Women

” goes a long way towards correcting that mistaken and
degrading viewpoint.