Navaho (misspelling, but how it is pronounced in English), Dine’

Eastern side of the Navajo Reservation

The Navajo Nation Flag, designed by Jay R. Degroat, a Navajo from Mariano Lake, New Mexico, was selected from 140 entries, and was officially adopted by the Navajo Nation Council on May 21, 1968 by Resolution CMY-55-68.

On a tan background, the outline of the present Nation is shown in copper color with the original 1868 Treaty Reservation in Dark Brown. At the cardinal points in the tan field are the four sacred mountains. A rainbow symbolizing Navajo sovereignty arches over the Nation and the sacred mountains. In the center of the Nation, a circular symbol depicts the sun above two green stalks of corn, which surrounds three animals representing the Navajo livestock economy, and a traditional hogan and modern home. Between the hogan and the house is an oil derrick symbolizing the resource potential of the Tribe, and above this are representations of the wild fauna of the Nation. At the top near the sun, the modern sawmill symbolizes the progress and industry characteristic of the Navajo Nation’s economic development.

The Navajo are the largest native American tribe in the US, with over 250,000 members.

A person must be at least 1/4 Navajo to be enrolled as a member of the Navajo Nation.

Contact the Navajo tribe to see if they have records of your ancestors.

Charter:
The Navajo government refused the establishment of a tribal government under the Indian Reorganization Act of 1934 (IRA) three times. Members twice rejected constitutional initiatives offered by the federal government in Washington, first in 1935 and again in 1953. An initiative in 1963 failed after members found the process to be too cumbersome and a potential threat to tribal self-determination.

Dates of Constitutional amendments: Reorganized in 1991 to form a three-branch system (executive, legislative and judicial), the Navajos conduct what is considered to be the most sophisticated form of Indian government.

The Navajo Language: A Grammar and Colloquial Dictionary

Tségháhoodzání, the Window Rock on the Navajo Reservation 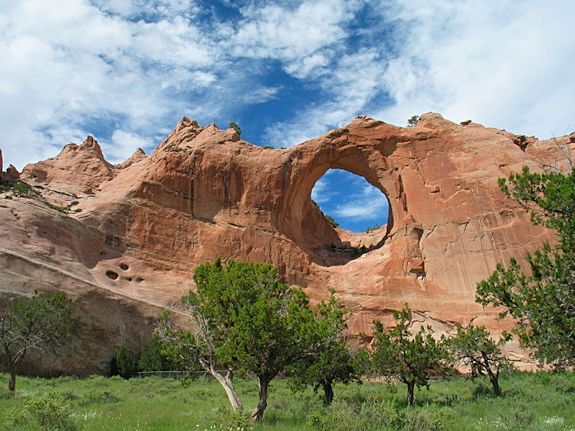 The Navajo people believe they passed through three different worlds before emerging into this world, The Fourth World, or Glittering World. The Diné believe there are two classes of beings: the Earth People and the Holy People.

The Navajo Reservation is home to more than a dozen national monuments, tribal parks and historical sites, and is peppered with a dozen lakes and ponds – Lake Powell alone has 186 miles of Navajoland shoreline.

The Annual Navajo Nation Fair is the largest American Indian fair in the United States.

In the old days, the Navajo practiced few manual arts, except the Navajo baskets. Their legends said that when they first arrived they did not know how to make blankets — weaving was learned from some Pueblo women who was captured and taken into the tribe. They soon became famous for their Navajo blankets, as they are today.

Similarly, they learned silversmithing in the 1800s as a way of having something to sell to tourists, and today they are world famous for their fine turquoise jewelry.

Oil was discovered on Navajo lands in the early 1920’s.

Meaning of the prayer or dance fan explained

Navajo Burial Customs and Fear of the Dead

Diné College, located in Tsaile, Arizona, serves the residents of the 26,000 square-mile Navajo Nation which is spread over Arizona, New Mexico and Utah. Founded in 1968, it is the first of 37 tribal colleges. Diné College has two main campuses and six community centers serving approximately 2,000 students.

The Navajo Nation chartered the Navajo Technical University in 1979. Originally named the Navajo Skills Center, its founding purpose was to combat the reservation’s high unemployment rate by training and integrating Navajo workers into the workforce. In 1985, the college’s Board of Directors changed its name to Crownpoint Institute of Technology (CIT), as its mission expanded to meet the demand for greater post-secondary opportunities on the reservation. CIT received Land Grant status in 1994, and in November 2006, the Navajo Nation Council approved changing the name once again to Navajo Technical College.

In 1864 nearly nine thousand Navajo people were forced to trek more than three hundred miles to Fort Sumner where they were interned at Bosque Redondo for four years. The Navajo call this ‘The Long Walk’ and many died both along the way and while imprisoned.