The Yup’ik and Cup’ik People

The southwest Alaska Natives are named after the two main dialects of the Yup’ik language, known as Yup’ik and Cup’ik. The estimated population, at the time of contact, was: Nunivak 500, Yukon-Kuskokwim 13,000 and Bristol Bay 3,000.

The Yupik are a group of indigenous or aboriginal peoples of western, southwestern, and southcentral Alaska and the Russian Far East.

They are Eskimo and are related to the Inuit and Iñupiat peoples.

The Yup’ik and Cup’ik still depend upon subsistence fishing, hunting and gathering for food. Elders tell stories of traditional ways of life, as a way to teach the younger generations survival skills and their heritage.

Russian explorers in the 1800s erroneously confused the Yupik people bordering the territory of the somewhat unrelated Aleut, and Alutiiq.

By tradition, this term has remained in use, as well as Sugpiaq, both of which refer to the Yupik of Southcentral Alaska and Kodiak.

Central Alaskan Yup’ik people live around the Yukon-Kuskokwim delta, the Kuskokwim River, and along the northern coast of Bristol Bay as far east as Nushagak Bay and the northern Alaska Peninsula at Naknek River and Egegik Bay in Alaska.

Siberian Yupik people, include Naukan, Chaplino, and Sirenik of the Russian Far East and St. Lawrence Island in western Alaska.

Yupiit is the plural form of Yupik. Yupik means, “real person.” In the Hooper Bay-Chevak and Nunivak dialects of Yup’ik, both the language and the people are given the name Cup’ik.

Yup’ik and Cup’ik can be used interchangeably to mean the same people.The use of an apostrophe in the name “Yup’ik”, compared to Siberian “Yupik,” exemplifies the Central Yup’ik’s orthography, where “the apostrophe represents a long “p” sound.

The common ancestors of Eskimos and Aleuts (as well as various Paleo-Siberian groups) are believed by archaeologists to have their origin in eastern Siberia, arriving in the Bering Sea area about 10,000 years ago.

There appear to have been several waves of migration from Siberia to the Americas by way of the Bering land bridge, which became exposed between 20,000 and 8,000 years ago during periods of glaciation.

By about 3,000 years ago, the ancestors of the Yupiit had settled along the coastal areas of what would become western Alaska, with migrations up the coastal rivers—notably the Yukon and Kuskokwim—around 1400 C.E., eventually reaching as far upriver as Paimiut on the Yukon and Crow Village on the Kuskokwim.

More than 75% of the Yupik/Yup’ik population are fluent in their language.
The Alaskan and Siberian Yupik, like the Alaskan Inupiat, adopted the system of writing developed by Moravian Church missionaries during the 1760s in Greenland.

In addition, the Alaskan Yupik and Inupiat are the only Northern indigenous peoples to have developed their own system of hieroglyphics, a system that died with its inventors.

Late nineteenth-century Moravian missionaries to the Yupik in southwestern Alaska used Yupik in church services, and translated scripture into the people’s language.

Many of today’s villages were ancient sites that were used as seasonal camps and villages for subsistence resources.

Historically the Yup’ik and Cup’ik people were very mobile, traveling with the migration of game, fish and plants.

The ancient settlements and seasonal camps contained small populations, with numerous settlements throughout the region consisting of extended families or small groups of families.

All males in some Yup’ik/Cup’ik communities lived in a qasgiq, or men’s house/community center.

Boys old enough to leave their mothers joined male relatives in the qasgiq, where they lived, worked, ate, bathed, slept and learned how to be men.

Women prepared and brought food to the qasgiq. Ceremonies, singing, dancing and events usually occurred in the qasgiq, thus making it a community center.

Women and children lived in an ena, which had architectural features similar to the qasgiq, although the qasgiq was twice as large. Bearded seal or walrus intestine provided a removable “skylight” window.

Like most other winter dwellings, the qasgiq and the ena shared the distinctive, partially semi-subterranean winter entrance passageway – which in the ena also provided space for cooking.

Technology was highly adapted to survival in the sub-arctic environment, and was fine-tuned through the centuries by trial and error.

Technology was mostly geared toward the marine environment along the coast and more riverine habitats in the delta regions.

Men’s tools were associated with hunting and were elaborately decorated with appropriate spiritual symbols to aid in hunting success.

These items included a variety of spears, harpoons, snow goggles, ice cane, and bow and arrows for hunting and warfare.

Social culture and behavior were all geared toward survival and compatibility among family-village groups. Cultural roles and social rank were largely determined by gender and individual skills.

There were good and evil shamans that had separate roles within the village.

Good shamans would heal, search out animal spirits for the hunters, ask for survival necessities such as driftwood and good weather.

The bad shamans battled good shamans for power, placed curses on people, generally made life miserable for others and could even kill. It is believed that some Yup’ik/Cup’ik people still possess shamanistic powers.

Traditionally, skins of birds, fish, and marine and land animals were used to make clothing. Hunting clothes were designed to be insulated and waterproof.

Fish skin and marine mammal intestines were used for waterproof shells and boots. Grass was used to make insulating socks, and as a waterproof thread.

Coastal villages traded with the inland villages for items not locally available.

Seal oil was highly desirabed by inland villages who usually bartered moose/caribou meat and furs such as mink, marten, beaver and muskrat, for seal oil and other coastal delicacies such as herring and herring eggs.

Most settlements and camps were occupied by extended families or small groups of families. Elaborate winter ceremonies emphasized the relationship among humans, animals, and the spirit world. 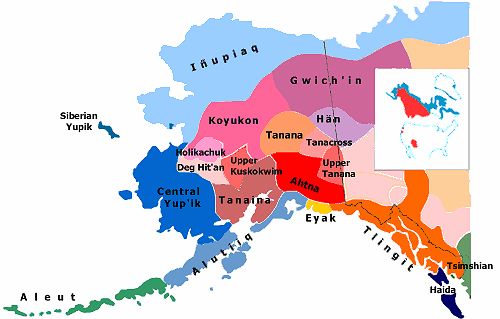 The Alutiiq people are also referred to as Aleut (plural form “Alutiit“), also called by their ancestral name Sugpiaq (plural form “Sugpiat” or “Sugpiak“) as well as Pacific Eskimo or Pacific Yupik.  At present, the most commonly used title is Alutiiq (singular) or Alutiik or Alutiit (plural). They are not to be confused with the Aleuts, who live further to the southwest, including along the Aleutian Islands. The Alutiiq are a southern coastal Native people of Alaska.