Men, women and children from more than 250 American Indian tribes gathered in a large arena to celebrate their culture and honor their military veterans at the 3rd Annual National Powwow (August 10-12) in Washington, D.C. The National Powwow is a biennial event where more than 500 native american dancers come to share their culture. 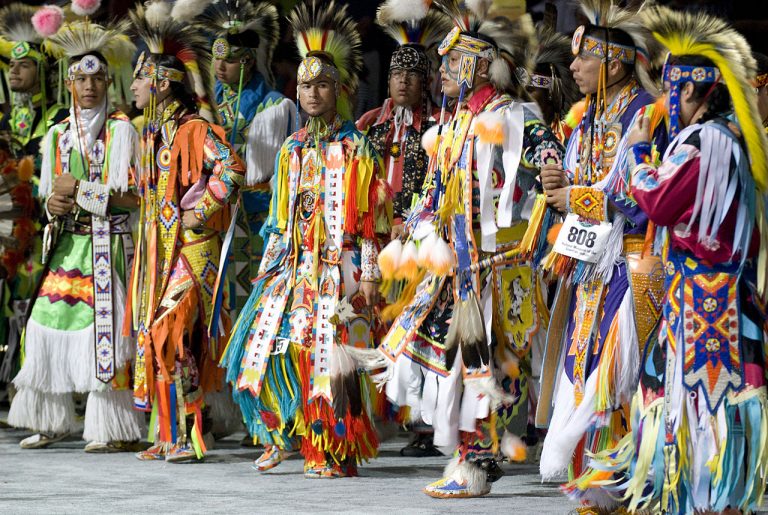 Since the late 19th century, powwows have been a significant social and cultural force in the lives of the indigenous people of North America.

Bringing together American Indians from different tribes to dance, sing and share traditions, these social events are held throughout the United States every month of the year, but are most popular from March to September.

The largest on the East Coast is the National Powwow, a biennial event in Washington that attracts members of some 250 tribal nations from the United States and Canada.

The Northern Plains Dancers, a group that performs traditional and contemporary American Indian dances, traveled from the Fort Berthold reservation in North Dakota to attend the third National Powwow (August 10-12).  Before joining the festivities, the group stopped at the Smithsonian Institution’s National Museum of the American Indian (NMAI) to perform at the museum’s amphitheater.

In interviews with USINFO, several of the dancers spoke about the importance of sharing their culture with outsiders, and all stressed the need to dispel negative stereotypes.

“I want to show people that there’s more to us than what they have seen in movies,” said Wylie Bearstail (Hidatsa/Arikara), a grass dancer.  Rylan Baker (Hidatsa/Cree), who specializes in the Men’s Fancy Dance, agreed: “I hope that [spectators] will get a different perspective on Native Americans.  We’re not savages; we’re just like anyone else.”

With fringe flying, the dancers kept up with the drumbeats while an offstage narrator explained the significance of each dance.  One example is the Buffalo Dance, which is performed by a male dancer in a horned buffalo headdress.  In American Indian culture, hunters were reverent toward the animals they killed for meat and hides, reciting prayers to thank the animals for sacrificing their lives.

Buffalo herds, hunted to near-extinction by white settlers in the American West, have made a comeback and are being conserved in their native habitat by Indian tribes.  “Today, the buffalo has become the symbol of our survival,” the narrator said.

Many powwow dance styles are faithful to 19th-century prototypes, but others are modern-day variants.  The Grass Dance, which spread throughout America’s Great Plains region in the late 1800s, declined in popularity during the 1960s and 1970s but has experienced a revival.  Performed by male dancers wearing regalia with yarn fringes that represent prairie grass, this dance is thought to be part of a complex healing ceremony.

The Women’s Jingle Dress Dance is another traditional dance conceived as a healing ritual.  Vanessa Laducer and Lauren Frank (both Arikara/Blackfeet/Cree) demonstrated its steps, punctuated at every turn by the jingle of metal cones that adorned their dresses.

Women once were relegated to the perimeter of dance circles in American Indian societies, but they now join men in the center, performing their own dances as well as the “couples dances” in which they link hands with their male partners.

Onstage at the NMAI, Baker performed the Eagle Dance, sporting a band of eagle feathers on each arm.  As he circled with arms outstretched, he mimicked an eagle in flight, thereby sending messages to the Great Spirit. The eagle is regarded as a messenger to the spirit world, because it flies closer to the heavens than almost any other bird, according to the narrator.

Rituals and dances associated with warrior honor societies still are performed, but today they honor American Indian soldiers serving in the U.S. Armed Forces, as well as legendary warriors from the past.

The Men’s Fancy Dance and Women’s Fancy Shawl Dance are contemporary dances that have achieved tremendous popularity.  In these styles, the women are known for the grace of their movements, while the men maintain a fast pace that demands great athleticism.  As in all other American Indian dances, performers must pay close attention to the drums because they are required to conclude the dance exactly on the last beat.

“I’ve been dancing since I could walk,” said Frank, who performed both the Jingle Dance and Fancy Shawl Dance.  “I’ll definitely pass it on to my children.”

With the participation of the Northern Plains Dancers and many others, modern powwows help preserve the social traditions that are at the core of American Indian identity.  In the words of NMAI scholar George P. Horse Capture (A’aninin/Gros Ventre), the powwow is “a living celebration of the Indian people of today” that will continue “with vigor, tradition and change, year after year, as long as there are Indian people in the world.”