2397 Views
Mona Darkfeather was born as Josephine M. Workman on January 13, 1883, in Boyle Heights, California. Her father was Joseph Manuel Workman and her mother was Josephine Mary Belt. In 1909 she responded to an advertisement by Bison Motion Pictures for an “exotic looking girl” to play an indian princess in a Silent Movie.  She got the part and starred in a silent movie.

She was not born as a Native American. 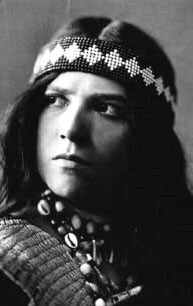 Darkfeather’s early publicity claimed she was a full-blooded Blackfoot Indian. Though she freely admitted in interviews that she was not of Indian ancestry, she said she was an Indian Princess, that she had been made a blood member of the Blackfoot Nation and given the title of princess by Chief Big Thunder. So successful was the studio’s promotion of Princess Mona Darkfeather that over the years, and even in 2005, she has been frequently referred to as an American Indian actress.

Some of the movies she played in were: