Long, long ago when the land was young there stood a very tall and proud Douglas fir tree. The fir tree was so tall that its topmost branches touched the clouds. The branches spread widely and offered protection to small plants and animals below. The fir tree held many cones on the ends of its branches which stood open and contained many seeds. A little mouse lived in the protection of the tree’s spreading branches. 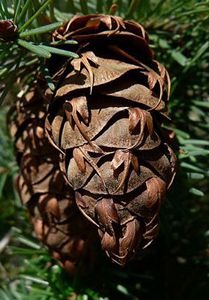 There was a long and cold winter where the snow was deep and the wind blew across the land. The Douglas fir stood tall and proud through the days of bitter cold. The little mouse was protected from the bitter winds and the snow fell only softly beneath the tree. But the little mouse could find no food in those cold dark days. The Douglas fir took pity on the mouse and said “climb up to the ends of my braches little mouse and you will find my cones. Inside the cones are many seeds which will keep hunger from you”.

He waited until the other mice were sleeping before he snuck away to climb and eat. But not all were asleep and one mouse saw where the little mouse had gone. He watched the little mouse eating seeds from the Douglas fir and he woke all the other mice. He told them what he had seen. All the others mice ran for the fir tree and climbed up to the cones. They climbed inside the open cones to get to the plentiful seed. This invasion angered the Douglas fir. The fir snapped shut all its cones, trapping the little mice inside.

To this day when you look at a Douglas fir cone you can see the little back legs and tails of the mice sticking out of the cones where they are trapped.