The Navajo police lieutenant from 14 Tony Hillerman novels has been altered for television. But his creator is pleased with what he sees.

Wes Studi, who plays Leaphorn in “Skinwalkers” as the new PBS Mystery  season gets under way Sunday (9 p.m. EST), must share credit for the novelist’s pleasure with director Chris Eyre and writer Jamie Redford, son of Robert Redford (who’s the executive producer).

Instead of the wise, patient and culturally sensitive sleuth of literature, the Leaphorn of the first U.S.set episode of the previously all-British Mystery series is redrawn as a grouchy urban cop who has lost touch with his Navajo roots and returns to the reservation with his ailing wife. 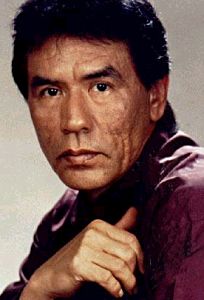 “I think Leaphorn is a figure that a lot of people can identify with — Indian and non-Indian — in terms of having left behind the world he grew up in to pursue interests in the urban world,” Studi said.

“While Leaphorn isn’t exactly enthusiastic about it, he begins to see how much his roots, his culture, have to do with who he’s come to be.”

Such characteristics would be useful to a police detective, said Wes Studi, who had the title role in Geronimo and has played in such films as Dances With Wolves, The Doors, Heat and The Last of the Mohicans.

“I think he would bring a presence of mind that is not necessarily a shoot-before-you-think kind of thing,” Studi said of Leaphorn. “He of course would have to respond in life-threatening situations. He’s portrayed as thinking things over before acting on them,  probably a very good thing for a detective.”

Hillerman said he likes the television adaptation for its economy and resourcefulness.

“It solved the problem of explaining the cultural stuff without making 7 1/2-hour movies,” Hillerman said.

The author first encountered Navajo culture as a returning World War II veteran. Even before he began his first job as a reporter, he saw Navajos going through a cleansing ritual associated with the psychological aftermath of war. He recognized they were veterans returning from World War II just as he was.

Chris Eyre, noted for his direction of Smoke Signals and more recently Skins, not to be confused with Skinwalkers, was relieved to hear of Hillerman’s approval, which singled him out.

“I was very much impressed with that guy,” the author said of the director. “I thought he did a hell of a good job making a movie out of that book, which was not an easy thing to do.”

The story revolves around the fraternity of Navajo medicine men, and a series of mysterious deaths among them. Junior officer Jim Chee, who’s studying to become a medicine man himself, is better suited to investigate than Leaphorn. There might be friction if they were Anglo cops, but harmony is important to the Navajo.

Natalie Noel with Adam Beach. Photo by Kent Edens on the Skinwalkers set

Eyre, of Cheyenne-Arapaho ancestry, grew up adopted in a white household and knows both worlds. He avoids stereotypes and “I don’t romanticize Indians,” he said.

Robert Redford has said bringing Hillerman’s work to film was a 14-year passion.

“The chance to elevate the issues surrounding Native American culture and to do it through the vehicle of solid entertainment is our hope and purpose,” Redford said.