How a Piegan Warrior Caught the First Horses

A long time ago a warrior of the Piegan Blackfoot dreamed about a lake far away where some large animals lived. A voice in the dream told him the animals were harmless, and that he could use them for dragging travois and carrying packs in the same way the Indians then used dogs. “Go to this lake,” the dream voice told him, “and take a rope with you so that you can catch these animals.”

When the Piegan awoke he took a long rope made from strips of a bull buffalo’s hide and travelled many miles on foot to the shore of the lake. He dug a hole in the sandy beach and concealed himself there. While he watched, he saw many animals come down to the lake to drink. Deer, coyotes, elk and buffalo all came to quench their thirsts.

After a while the wind began to blow. Waves rose upon the lake and began to roll and hiss along the beach. At last a herd of large animals, unlike any the Piegan had ever seen before, suddenly appeared before him. They were as large as elks, and had small ears and long tails hanging to the ground. Some were white, and some black, and some red and spotted. The young ones were smaller. When they reached the water’s edge and bent their heads to drink, the voice the man had heard in his dream whispered to him: “Throw your rope and catch one.”

And so the Piegan threw his rope and caught one of the largest of the animals. It struggled and pulled and dragged the man about, and he was not strong enough to hold the animal. Finally it pulled the rope out of his hands, and the whole herd ran into the lake and sank out of sight beneath the water.

Feeling very sad, the Piegan returned to camp. He went into his lodge and prayed for help to the voice he had heard in his dream. The voice answered him: “Four times you may try to catch these animals. If in four times trying you do not catch them, you will never see them again.”

Next morning the Piegan went again to the shores of the big lake, and again he dug a hole in the sand and lay hidden. At last the herd of strange animals came to drink at the lake, and again the man threw his rope. This time he caught one of the young animals and was able to hold it.

One by one he caught all the young animals out of the herd and led them back to the Piegan camp. After they had been there a little while, the mares–the mothers of these colts–came trotting into the camp. Their udders were filled with milk for the colts to drink. Soon after the mares came, the stallions of the herd followed them into the camp.

At first the Piegans were afraid of these new animals and would not go near them, but the warrior who had caught them told everybody that they would not harm them. After a while the animals became so tame that they followed the people whenever they moved their camp from place to place. Then the Piegans began to put packs on them, and they called this animal po-no-kah-mita, or elk dog, because they were big and shaped like an elk and could carry a pack like a dog.

That is how the Piegan Blackfoot got their horses. 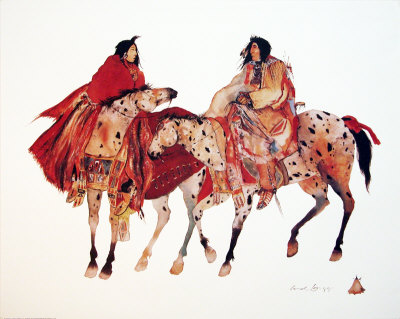 The Meeting
Carol Grigg
Buy This at Allposters.com