Hiking Canyon of Wonder and Superstition in Palm Springs, CA

After a 30-year closure, the lovely canyon named after a banished Cahuilla shaman called Tahquitz has reopened on a limited basis to hikers in Palm Springs.

At the new Tahquitz Canyon Visitor Center, hikers are ushered into a screening room for the “Legend of Tahquitz Canyon” video, then led onto the trail.

The Shadow of the Witch of Tahquitz is an everyday naturally occurring phenomenon. There are many Cahuilla Indian legends and early Palm Springs settlers legends associated with Tahquitz, The Witch, Indian Medicine Woman and Soul Eater Tahquitz.

As legend has it, the shaman Tahquitz first practiced her art here to good effect but soon became increasingly mischievous, then downright dangerous, and to this day he consumes people’s souls.

Some tribal members refuse to enter the canyon. So powerful is Tahquitz, believers say, that she can suddenly appear in downtown Palm Springs or manifest herself as an earthquake or a fireball in the sky. 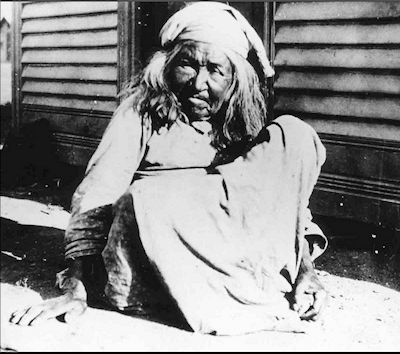 Mena, the Witch of Tahquitz

Her name was Mena and she was the Witch of Tahquitz, the woman who married Tahquitz and learned his power of Soul Eating, a way of breathing in a persons essence while sitting across a smoky fire from them.

At first, like Tahquitz himself, she used the power to cleanse people of sickness, leaving their greater selves pure.

But over time she began to breathe more and more of her patients essence until they were mere husks.

She did this as a way of robbing them of their strengths. Their energy would combine with hers making her stronger. As the years took their toll on her, she turned to cannibalism to increase her life further.

She was finally killed killed, or seemed to be, by the youthful Constable of Palm Springs, Riley Glenn Meeks, in 1919 when he and a small posse of local gentry including Zaddie Bunker, Big John Wiggins, Pedro Chino and a disgraced Indian boy named Jesus stormed together deep into her canyon lair to rescue a kidnapped Indian child named Rosanna.

Unfortunately, although the body was both shot and burned to a degree, the next day when the rescuers returned to retrieve the body, no remains were ever found.

For more information, read the entire detail of the rescue in
WITCH OF TAHQUITZ: Facts and Legends of the Village of Palm Springs

This a loop trail along the creek in the bottom of the canyon, and the waterfall flows into a pool of water at the halfway point during winter and spring. The waterfall tends to dry up to a trickle in the summer and fall.

The Agua Caliente Band of Cahuilla Indians closed the canyon to the public in 1969 after a rowdy crowd left a rock concert and descended into Tahquitz Canyon for days of partying.

In the years that followed, “No Trespassing” signs, locked gates and fences slowed–but did not stop–visitors.

Most of the hikers and skinny-dippers enjoyed the picturesque falls and respected the serene scene, but vandals dumped garbage on the canyon floor and spray-painted graffiti on the boulders. Hippies, hermits and homeless people took up residence in the canyon’s caves.

Finally fed up with the disrespect of the canyon, the Agua Caliente Band of Cahuilla Indians closed the trails in 1969 and they remained closed to outside visitors for the next 30 years.

The hike takes about 1.5 to 2 hours, depending on how much you linger along the way. There are plenty of places to stop, rest, and take in all of the beautiful views!

Before you start, look for the walking sticks people leave near the beginning of the walk.

Since you travel up and back along a creek, the sound of running water was a wonderful accompaniment on this canyon walk.

The canyon itself is several degrees cooler than Palm Springs and the water is amazingly refreshing. But if you go in summer, it gets over 90 degrees, so bring sun screen and a big bottle of water.

There are hummingbirds galore so bird watchers will love it. There are lots of lizards, too, rattlesnakes, and sometimes mountain goats.Be sure to check out the points of interest along the way in and out of the canyon.

The cliffs, canyon walls, plants & water are all wonderful & unexpected. You dip in and out of lovely vistas as you climb a mild incline up to a small waterfall. In spring there are lots of wildflowers in bloom, but keep an eye out for rattlesnakes.

The Cahuilla built a visitor center with educational and cultural exhibits and, after a three-year cleanup, reopened the canyon about a year ago. By allowing only guided hikes, the tribe wants to “keep the bad people out and let the good people in,” said tribal ranger Robert Hepburn.

Tribal rangers lead daily hikes through the storied canyon, which is two miles as the phainopepla flies southwest of downtown. There is a charge of $12.50 per adult and $6.00 for children to join the hike, but you can pick up a coupon at the Visitor Center for $2.50 off of the normal $12.50 entrance fee.

There is no senior’s discount, but they honor veterans, so if you have your veterans’ card be sure to bring it with you. You also get a discount if you show the brochure from Indian Canyon.

Smog sometimes obscures the view down-canyon, but up-canyon vistas are glorious. From Tahquitz Peak, a subsidiary summit of Mt. San Jacinto, a lively creek tumbles through an impressive gash in the towering rock walls.

The visitor center opens at 7:30 a.m. daily. I recommend starting early and arriving in time to watch the rising sun probe the dark recesses of Tahquitz Canyon. If you take the 8 a.m. tour, the first of the day, you’ll beat the crowds, avoid the heat and have the best chance of spotting wildlife.

At just two miles long, the hike is family friendly. But because it’s an interpretive hike that proceeds slowly, it’s not suitable for young children, particularly those younger than 6. They won’t appreciate the ranger’s narrative and may become a distraction to other hikers.

One alternative is a self-guided hike through one of the other Indian Canyons, nearby Palm Canyon, where you can see a huge collection of California fan palms.

Acclaimed nature writer and native Californian John McKinney is a lifelong hiking enthusiast who attributes much of his love of the wilderness to his early experiences as a Scout. One of his earliest narratives was “A Walk Along Land’s End,” which recounts his 1,600-mile solo trek the length of the California coast.

In 1994, McKinney and his wife, fellow writer Cheri Rae, were one of the major forces behind the movement to give the Mojave Desert area its present status as one of California’s newest National Preserves.

McKinney and his wife live in Santa Barbara, California with their two children.

For more of John McKinney’s tips, visit his website at www.thetrailmaster.com.

Written by one of the US’s foremost experts on prehistoric art, this field guide to southern California and southern Nevada’s Native American rock art provides an extensive introduction to understanding and appreciating rock art, followed by discussion of and directions to 38 sites, all open to the public. Color maps and superb color photographs. Annotation c. by Book News, Inc., Portland, Or.

This guide takes you on 105 walks in locales steeped in Native Californian culture and history. Salcedo provides hike descriptions and distances for long and short day hikes, as well as clear, easy-to-use maps.

Art Of The Shaman

This is a fabulous book for someone who loves art, who is interested in ancient peoples, or for someone who is interested in preserving the past. Rock art, our global priceless heritage, is fast disappearing — especially in such populated places as California. Dr. Whitley is among a handful of archaeologists in North America who are trying to understand this gift from the past before it is vandalized out of existence. Whether you like coffee table books or whether you just want to learn about rock art, this book is for you.

Grass Games and Moon Races is a collection of games played by California’s native people and is richly anecdotal, written with both affection and humor. It will appeal to a wide range of readers, from anthropologists to arm-chair students of Native American culture — and kids who simply want to learn a new game!

In a clear, easy-to-read style, dozens of games (some that are “extinct”, many that are being played today) are described. They range from field games such as Indian football to gambling games such as “stick dice” to entertainments such as cat’s cradles. Grass Games and Moon Races is wonderfully illustrated with dozens of photographs (both historic and contemporary), and drawings of games and players.

The Cahuilla Indians led a fascinating existence living in the mountains and deserts of Southern California (near Palm Springs). The book describes the way that they adapted to their environment.