The Hidatsa Indians often intermarried with their Mandan allies.Later, the remnants of the Arikara tribe joined them after a smallpox epidemic nearly wiped them out. Today, they are known as the Three Affiliated Tribes of Fort Bertold.


The Hidatsas, or Nuxbaaga (“Original People” as they call themselves) of the main division of Hidatsas, trace their origins from the point of their emergence from what is now called Devil’s Lake in eastern North Dakota.

The archaeological record indicates that the Hidatsas had established settlements on the Knife River at its confluence with the Missouri by the early 1600s. The early semisedentary culture of these farmers and bison hunters rested on the cultivation of corn, beans, squash, and tobacco. These commodities marked the Hidatsa villages as major indigenous trading centers of the Great Plains.

The first written accounts of Hidatsa life by nonnatives began with the geographer David Thompson’s 1797 narratives, which were written after the Hidatsa “River Crows” split from the “Mountain Crows” of present-day Montana. 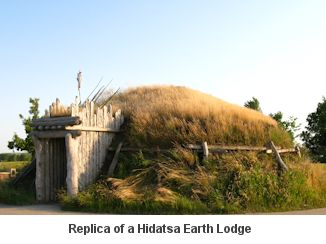 The Awaxawis, the smallest Hidatsa group, maintained an independent village several miles south of the other two groups. Distinctions among these autonomous groups had implications for exogamous social arrangements and trade relations. After population losses following an 1834 attack by the Dakota and a smallpox epidemic in 1837, the three Hidatsa groups merged with the Mandans at Like-A-Fishhook Village in 1845. The Arikaras joined them in 1856.

The Fort Laramie Treaty of 1851 described the boundaries of Hidatsa territory as reaching from the Missouri River as far west as the Yellowstone. By 1910, subsequent treaty abrogations reduced this land base to 640,000 acres.

The Fort Berthold reservation was established by executive order in 1891, but it was not until the provisions of the 1934 Indian Reorganization Act that the Mandans, Hidatsas, and Arikaras incorporated as the Three Affiliated Tribes. Despite particular features of shared history, there remain distinct linguistic and cultural differences among the three tribes.

In general, clan relations structure ceremonial and social behavior by prescribing individual participation in life-cycle events, such as naming ceremonies, funerals, and the War Bonnet Dances which involve selected clan children each spring.

Hidatsa kinship shares many features with Mandan social organization; Hidatsa and Mandan clans belong to one of two remaining divisions, the Three Clan (Naginawi) and the Four Clan (Nagitopa). Hidatsas generally agree that the Three Clan comprises the Knife, Alkali Lodge, and Low Cap clans and that the Four Clan is made up of the Waterbuster, Prairie Chicken, Wide Ridge (extinct), and Dirt or Mud Dripping clans.

This system, described at length by the anthropologist Alfred Bowers, appears to be what remains of a moiety system that operated in the late eighteenth century as the thirteen-clan system of the Awatixas and the seven-clan system of the Awaxawis and Hidatsas proper. While Mandan assimilation with Hidatsa forms of social organization allows a treatment of the two divisions as a unitary system, tribal members distinguish between “Mandan” and “Hidatsa” cultural identity.

Among the Hidatsas, kinship is actively constructed to assert shared group identity and cultural history. Thus origin stories related to the thirteen-clan system, such as the story of Charred Body, are told as a means of relaying cultural history by establishing ancestral relationships to specific cultural and sacred sites in North Dakota.

In previous times, Hidatsa age-graded societies regulated the transmission of ritual knowledge and in general structured Hidatsa society by prescribing cultural norms. For example, the Black Mouth Society was a male warrior society whose members policed the activities of the village.

Women’s age-graded societies likewise directed the comportment of girls, who were inducted into one of the Holy Women societies at appropriate junctures in the life cycle. Contemporary Hidatsas abide by these rules in modified forms, and several societies, such as the Antelope, Kit Fox, and Enemy Women, remain active today.

The Hidatsas share common historical linkages with the Mandans and Arikaras, including twentieth-century upheavals and adjustments caused by construction of the Garrison Dam. Built in 1951 by the Army Corps of Engineers, this dam had an immense impact on the Three Affiliated Tribes, one nearly equal in severity to the 1837 smallpox epidemic that reduced the Hidatsas to near cultural extinction.

In addition to flooding and destroying the three tribes’ fertile bottomlands, the dam fractured communities and separated them across wide distances. People who were once neighbors now live surrounded by immense lakes that cut them off from one another. Nonetheless, Hidatsas continue to travel around the water from their communities in Mandaree, Four Bears, Shell Creek, Lucky Mound (Parshall), and New Town.

Community segments, such as those at Shell Creek and Mandaree, maintain distinct orientations as “Hidatsa” sites of residence and cultural history. Community celebrations at Mandaree (West Segment) and Little Shell (North Segment) attest to Hidatsa solidarity. Drum groups, such as the Mandaree Singers, affirm cultural continuity and innovation.

Recent gains in the legislative arena have added to a renewed sense of social and cultural revitalization. For example, testimonies given by tribal members as part of the 1986 Joint Tribal Advisory Committee provided evidence for just compensation awards for lands taken from the tribes for the Garrison Dam project.