Herbert George Powless (Oneida) began his journey to the Creator’s land, on January 30, 2018.

Herb was born on February 22, 1937, to Margaret (Stevens) Powless and Mark Powless. Herb joined the U.S. Marine Corps. when he was 15 years old.

He is a veteran of the Korean War. Herb worked at American Motors Corporation in Milwaukee and was one of the members of the Labor Union and involved in negotiating union contracts. Herb joined the ranks of his brothers, and became an iron worker.
In 1970, Herb started the first ever American Indian Council on Alcoholism

Herb was a pioneer, and was the first to have the National Indian Health Service in Washington D.C. fund the treatment of alcoholism in Indian Country funded through treaty rights and allowed traditional treatment as a tool for treating the sickness’

Herb incorporated sweat lodges and ceremonies into the treatment plan for our Native people.

Also in 1970, Herb along with a group of concerned Native Americans founded the 3rd Chapter American Indian Movement (AIM) in Milwaukee, Wisconsin. 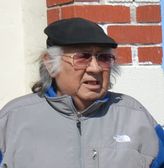 Herb was known for his leadership in AIM which was founded to encourage traditional, cultural and spiritual teachings.

He was involved in the planning and eventual take over of the coast guard station in Milwaukee Wisconsin, which was utilized as a halfway house for Native people and home to the Indian Community school for native youth in Milwaukee.

The Forest County Potawatomi Tribal casino in Milwaukee is the result of that Coast Guard Station take-over.

Under his leadership in AIM, Herb went to Oklahoma to support the issue of our freedom of religion which resulted in Oklahoma passing a law allowing Native students to wear long hair which was previously disallowed by the Oklahoma Public school system.

Herb was an activist and served Native people tirelessly throughout the years. His dream was to make change so that his children and grandchildren wouldn’t have to live with the racism and discrimination that his generation and those before him lived with.

The Native language and the songs of our people were music to his ears.

He was preceded in death by his parents, one son Anthony, his sisters Lorraine Cornelius, Mary Dodge and brothers John and Purcell Powless.

Among his best friends who he calls brothers are John Thomas, Bill Means, and the late Dennis Banks and the late Ted Means.

Visitation will be held at the residence of Dale and Cheryl Powless, 1802 Poplar Lane, Seymour, WI 54165 beginning on Thursday, February 1st at 4:30 PM until Friday at 6:00 PM. Traditional funeral ceremonies will commence at 9:00 PM on Friday until 8:00 AM on Saturday. Burial will be in the Oneida Sacred Burial Grounds at 11:00 AM on Saturday with full Military Honors. A meal will follow the burial at the Parish Hall in Oneida, WI on Saturday at 12:00 PM. Food donations can be dropped off at the Parish Hall anytime after 8 AM on Saturday.

We remember his words, “I WILL NEVER APOLOGIZE FOR WHAT I DID OR WHAT AIM HAS DONE…AND I DON’T WANT TO BE ASSOCIATED WITH ANYONE WHO WOULD.”