The Havasupai Reservation is remotely located near the southwest corner of the Grand Canyon National Park in Arizona and consists of 188,077 acres. It is home to the federally recognized Havasupai tribe. 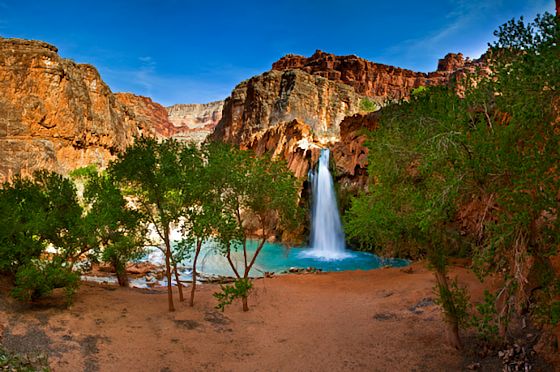 Havasu Falls, pictured above is in the Grand Canyon. The Havasupai Reservation was established by Executive Orders of June 8 and November 23, 1880 and March 31, 1892.

The Havasupai have inhabited the Havasu Canyon for nearly 1,000 years. Presently the tribe has begun to take advantage of the beauty of its land by turning it into a tourist destination for visitors to the Grand Canyon.

Tourism is the tribe’s main source of income

The tribe operates a lodge and campground near Havasu Falls as their main source of income, as well as a mule train and helicopter service. The only way into the village is by hiking, or occasionally helicopter service is available. Tribal members often work as packers and/or workers for tourist ventures, or work at the lodge, tourist offices, the café, etc.

Supai is the name of the Havasupai city located at the bottom of the Grand Canyon. The town is the capital of the Havasupai Indian Reservation. It is home to around 500 of the tribe members and is one of the most remote cities in the contiguous United States, as it can only be accessed by taking old U.S. Route 66 and traveling about 60 miles (96 km) along BIA Road 18 to the trailhead.

The city can be reached from the trailhead via an 8 mile (13 km) hike. An alternative to the hike is periodically available helicopter service or a horse ride. Hikers can also hire a mule train to carry their packs up and down the canyon walls. The trail to Supai descends approximately 2,000 feet (610 m). The campground is an additional 2 miles (3.2 km), with another drop of about 350 feet (110 m) feet.

The town has 136 houses, a café, a general store, a tourist office, a lodge, a post office, a school, an LDS chapel, and a small Christian Church, among other buildings.

Tourism is the main source of revenue for the Havasupai tribe. The town receives more than 20,000 visitors per year. The Tribe charges for entering its land, and visitors are required to reserve either a room at their lodge, or space at the campground.

Located primarily in an area known as Cataract Canyon, this Yuman-speaking population once laid claim to an area the size of Delaware. In 1882, however, the tribe was forced by the federal government to abandon all but 518 acres of its land.

A silver rush and the Santa Fe Railroad in effect destroyed the fertile land. Furthermore, the inception of the Grand Canyon as a national park in 1919 pushed the Havasupai to the brink, as their land was consistently being used by the National Park Service.

Throughout the 20th century, the tribe used the US judicial system to fight for the restoration of the land. In 1975, the tribe succeeded in regaining approximately 185,000 acres of their ancestral land with the passage of the Grand Canyon National Park Enlargement Act.

Following the return of a large share of their land, the Havasupai as a tribe have once again begun to flourish. Although many of the day-to-day customs that existed prior to 1882 are not well established today, the Havasupai have continued to respect and preserve the traditions of their ancestors. As of today the tribe consists of about 650 members, and around 200 others claim Havasupai heritage.

Ethnically, the Havasupai and the Hualapai are one people, although today, they are politically separate groups as the result of U.S. government policy. The Hualapai (Pa’a or Pai) had three subtribes: the Plateau People, Middle Mountain People and Yavapai Fighter. The subtribes were divided into seven bands, which themselves were broken up into thirteen regional bands or local groups. The local groups were composed of several extended family groups, living in small villages:The Havasupai were just the Havasooa Pa’a regional band (or local group) of the Nyav-kapai (“Eastern People”) of the Plateau People subtribe. Today, the Havasupai are a separate federally recognized tribe.