Floyd Red Crow Westerman is probably best known for his role in the western epic ‘Dances with Wolves.’ Today, Westerman is also involved with other projects that bring awareness to subjects like the environment. 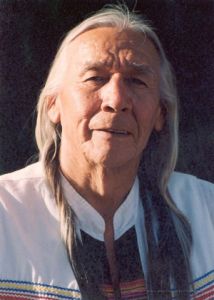 Floyd Red Crow Westerman was a part of the popular protest that culminated at Wounded Knee in 1973.

He says that there were so many others that were a part of it and that the protest wasn’t really aimed at making the country aware of Indian rights in general, but toward justice and responsibility for the Lakota at Pine Ridge, South Dakota.

“I don’t know if we (AIM) set any goals,” said Westerman, “we went there (to Wounded Knee) as a protest against the Chairman of the Pine Ridge reservation which was Dick Wilson.” Westerman isn’t reserve when expressing his opinion about the controversial leader of the day.

Although AIM gained a lot of national recognition during this time, Westerman remembers the organization’s beginning and two areas that could be called the birthplace of the AIM movement.

“AIM started in Minneapolis,” says Westerman. “It was formed to protest against police brutality toward Indians living there. “They (police) were arresting Indians, and beating them up.

“We started using cameras, and we had a lawyer there to help our cause. But 1968 in Denver, Colorado is where it formally got started with headquarters being located there.

After Minneapolis, we then were asked to go to Pine Ridge, to help traditionalists to stop the exploration of uranium mining.” Westerman, as well as lot of others, felt that Wilson was paid off.

“Traditional Lakotas asked AIM to come there to help them and get their message out,” but he (Wilson) had an army called Goons, Dick Wilson would not let us demonstrate on the reservation, so we went to Wounded Knee, Wilson called up the National Guard, and there were tanks, guardsmen, and 50 caliber machine guns.”

Besides the terrific site that Westerman describes, he states that the protests and demonstrations simply came down to basic human values, “it was about the treaties, the land, to make America honor its treaties to the Indian people.”

Westerman, who is Dakota Sioux, is an accomplished musician and partially from the AIM movement came the album and song ‘Custer Died For Your Sins’ inspired from the book and same title that was written by Vine Deloria, Jr. “Custer Died for Your Sins

is about the Indian point of view,” says Westerman.

“Indian people relate to it more than any other album. Indian people tell me that, but there are so many issues, even this album doesn’t cover it all.” While living in Denver in 1970, Westerman was the President of the White Buffalo Council.

He and Deloria became friends. “He (Deloria) had written the book,” says Westerman. “I was singing in lounges and in the areas around Denver, we would talk, and he told me “you know, there ought to be a song about anthropologists, a song about missionaries, a song about the freedom of religion for Indians.”

Floyd Red Crow Westerman says he was expressing this to let everyone know about the experiences Native Americans were facing during the time of the late 60’s and early 70’s.

“My songs expressed the Indian point of view, and Indian issues, situations were getting worse and worse. “Our treaty rights are human rights, we were creating a national liberation front, and it’s still going on.”

Today, Floyd Westerman is also involved with other projects that bring awareness to subjects like the environment. Westerman completed a South American concert tour with popular musician Sting about the rain forests.

Of course, Red Crow Westerman is still best remembered for his role in the western epic ‘Dances with Wolves’. It was never really Westerman’s intent to act, but the coaxing of another popular Indian actor and friend helped pave the way.

“Will Sampson, he got me started,” says Westerman, “we were speaking at colleges together, I got to know Will like a brother, he lived near Pasadena and had some horses, we would go riding all the time. But he was developing a serious illness in his lungs. He was wearing oxygen so much, one day I went to visit him and he was in bed, he was a giant of a man, he asked me if I would go and read for a part.

He said “I don’t think I can do it anymore,” he said “I know you can do a good job.” Three days later, I was flying to Vancouver, British Columbia to do my first job, in a MacGyver TV show.”

’ has enabled him to have a broader platform in promoting causes such as the environment which is very important to him, the concert tour with Sting was proof of that.

’. Westerman says that he met the legendary ‘Man in Black’ performer at an AIM rally and other benefits such as for the environment. The likes of Jackson Browne, Bonnie Raitt, Kris Kristofferson and Willie Nelson were a part of the many concerts where Westerman and Cash performed.

“We exchanged a few hellos,” says Westerman when recalling meeting the stately Cash. He is such a striking person to look at, kind of tall, the way he was dressed, his presence, dressed in black, like the American country icon he is. Next to Hank Williams, he was the greatest artist in country music and he was very supportive of Indian rights.

Johnny Cash said that he was Cherokee. He did an album called ‘Bitter Tears’, and most of the Indian community realized his stance then. His song about Pima Indian and U.S. Marine Ira Hayes, well, I felt real good about him, what he was doing for Indian people.”

This article first appeared at www.nativetimes.com