At Crow Fair in Montana, I was told another story about the Fancy Shawl Dance. While the Crow people also equate this dance form as an expression of re-emergence and renewal of life forces, they have a very different explanation of how it began. Their version goes like this: 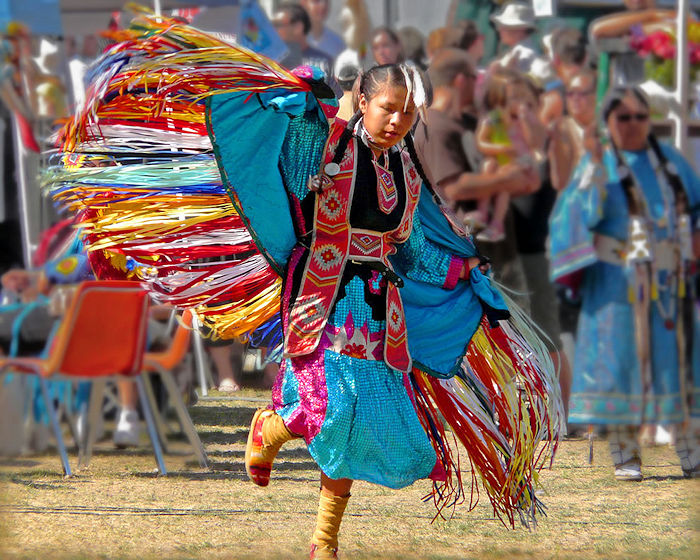 When the men returned from World War II, many of them were impressed with the dance troupes they had seen perform in Europe, and the colorful clothing the European dancers wore.

A transformation began in the Men’s Traditional Dances as these men began to incorporate bright colors into their traditional outfits, and add aerobic movements into their interpretation of traditional dances. This evolved into a very strenuous dance competition category called the Fancy Dance.

The young ladies of the time thought this looked like a lot of fun and they wanted to try it, too. Not to be out done by the men, some of these bold young women began to strap two bustles to their backs and compete in the Men’s Fancy Dance category at pow wows.

Well, as you can imagine,this did not go over very well with the men, who were outraged at women who were forward enough to push their way into a MAN’s category of competition. (Remember, this was the 1940’s.) What was even worse, many times the women were beating the men in competition!

This was considered pretty disgraceful from the men’s point of view, yet they also had to keep their women happy. Eventually, a council of Elders got together to ponder what they could do about this pitiful situation.

After much thought and consideration,it was decided to give the ladies their own category of Fancy Dance, but something more regal and graceful, which was more suited to the expected behavior of women.

The Elders decided that the Butterfly Dance would be suitable for adaptation to this new dance style for women. Thus, the Fancy Shawl Dance category was begun in modern competitions.