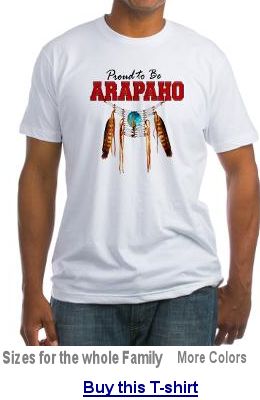 The Cheyenne Nation is composed of two united tribes, the Só’taa’e (more commonly as Sutai) and the Tsé-tsêhéstâhese (Tsististas). The Northern Cheyenne are known in Cheyenne either as Notameohmésêhese meaning “Northern Eaters” or simply as Ohmésêhese meaning “Eaters.”

The Arapaho recognize themselves as Hiinono’ei, variously translated as “our people,” “wrong rooters,” or “cloud people.” 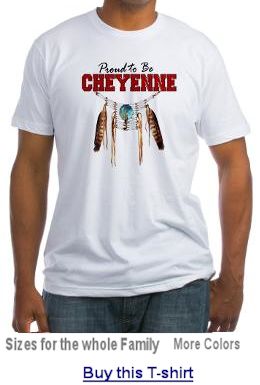 Arapaho is possibly derived from the Pawnee word tirapihu, which means “trader” or the Crow term for “tattooed people.” Formerly the Cheyenne-Arapaho Tribes of Oklahoma

Most historians place prehistory Arapaho homelands in parts of the Saskatchewan, Manitoba and Ontario Provinces of Canada and in the upper parts of the U.S. in what is now Minnesota and Michigan. Over time they migrated west into Colorado and Wyoming, eventually occupying lands ranging from northern New Mexico, Oklahoma and Kansas north into Wyoming and South Dakota.

Arapaho territory once extended from the Big Horn Mountains in the north, south to the Arkansas River, and east to west from the Black Hills to the Rocky Mountains, corresponding to present-day western Nebraska and Kansas, southeastern Wyoming, and eastern Colorado.

By 1840, the northern and southern bands of the Arapaho had acquired separate identities as the Northern Arapaho and the Southern Arapaho. The approximate boundary between the two tribes was the South Platte River of Colorado. This area, encompassing modern-day Denver, was a common meeting place for the two tribes and for intertribal trade.

Today the principal communities of the Northern Arapaho in Wyoming are Arapahoe, St. Stephens, and Ethete. The central communities for the Southern Arapaho are Canton and Geary, Oklahoma with tribal administration centralized in Concho.

The Cheyenne were originally a Woodland people living in the eastern portion of the U.S. and later migrated into the plains. Although they are identified as Plains Indians who followed the buffalo, they retain ties to their woodland heritage.

At least one enrolled parent and a blood quantum equal to or greater than ¼ Cheyenne and/or Arapaho blood. Enrolled parent must be present on Birth Certificate.

Arapaho is one of five languages of the Algonquian family in the Plains culture area. The others are Cheyenne, Plains Cree, Plains Ojibwa, and Blackfoot. Arapaho diverges markedly, especially in grammar, from these and other languages in the group, suggesting a long separation from the Great Lakes proto-Algonquian (or Algic) stock.

Within the Arapaho language there were once at least five dialects, representing what were separate bands or subtribes, including Hitouunenno’, or “Beggar Men,” now known as the Gros Ventre. By the end of the eighteenth century, the Arapaho proper had separated from the Gros Ventre tribe, which then remained in the northern Plains in what is now Montana.

In the centuries before European contact, the Cheyenne were at times allied with bands of the Lakota (Sioux) and Arapaho. In the 18th century, they migrated west away from Lakota warriors, but by the next century, bands of Lakota had followed them into the Black Hills and Powder River Country. By the mid-nineteenth century, they were sometimes allied with other Plains tribes. The Arapaho were allied with the Cheyenne, Gros Ventre and sometimes the Lakota.

Alone among the Plains tribes, the Cheyenne waged war at the tribal level, first against their traditional enemy, the Crow, and later (1856–1879) against US forces. They were also enemies of the Pawnee. Arapaho war parties raided on Eastern Shoshone and Utes to the west, the Crow to the north, the Pawnee to the east, and the Kiowa, Comanche, and Apache south across the Arkansas River. By 1840, the Arapaho had made peace with the Sioux, Kiowa, and Comanche, but were always at war with the Shoshone, Ute, and Pawnee until they were confined upon reservations.

French traders reported that the Cheyenne Indians in Kansas got their first horses in the year of 1745.

Arapaho Journeys: Photographs and Stories from the Wind River Reservation

The Cheyenne Indians: Their History and Lifeways