There are 86 Indian Reservations, Indian Colonies, and Rancherias within the state of California. 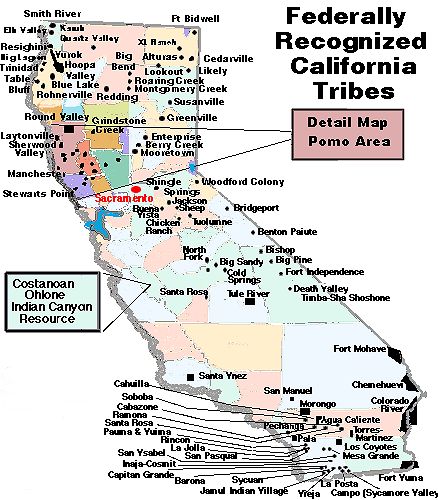 The Agua Caliente Indian Reservation is home to the Agua Caliente Band of Cahuilla Indians, located in Riverside County, California. The Agua Caliente Indian Reservation was founded in 1896 and occupies 31,610 acres (127.9 km2). Since 6,700 acres (27 km2) of the reservation are within Palm Springs city limits, the tribe is the city’s largest collective landowner. The tribe owns Indian Canyons, located southwest of Palm Springs. The canyons are listed on the National Register of Historic Places. They also own land in the Santa Rosa and San Jacinto Mountains National Monument.

The Alturas Indian Rancheria is a federally recognized tribe of Achomawi Indians in California.The tribe controls a 20-acre (81,000 m2) reservation near Alturas, California, in Modoc County. Tribal enrollment is estimated at 15.The reservation lies about one mile southeast of downtown Alturas. The Achomawi are also known as the Pit River Indians. They traditionally spoke the Achumawi language.

The Berry Creek Rancheria of Tyme Maidu Indians are a Native American people inhabiting a northeastern part California, south of Lassen Peak. They are a federally recognized Maidu tribe, headquartered in Oroville in Butte County. Their reservation is 65 acres (260,000 m2), located in two geographically separate sites: one near Oroville in the community of Oroville East, and the other at the eastern edge of the community of Berry Creek, within a mile of the Feather River. The tribe has 304 enrolled members; 136 of whom live on the reservation, commonly referred to as the Berry Creek Rancheria.

The Big Bend Rancheria of the Pit River Tribe (Achomawi) is located just north of Big Bend, in Shasta County, California. It is about 50 miles northeast of Redding.

The Big Valley Band of Pomo Indians of the Big Valley Rancheria is a federally recognized tribe of Pomo and Pit River Indians, with a reservation located in Lake County, California, near the town of Finley. They conduct tribal business from Lakeport, California. The tribe formed its current governmental system under the Indian Reorganization Act of 1935 and ratified its constitution on 15 January 1936. Today tribal enrollment is estimated to be 225.

The Bishop Paiute Tribe has a federal reservation, the Bishop Community of the Bishop Colony in the upper Owens Valley, above the city of Bishop, California. The reservation is on the lower slopes and alluvial fan of the Eastern Sierra Nevada Mountains and is 877 acres (3.55 km2) in size.Approximately 1,441 tribal members live on the reservation, which was established in 1912. In 1990, 934 people were enrolled in this federally recognized tribe.

In 1966, the United States Government returned the Blue Lake Rancheria to the tribe but removed all Native rights from the tribe’s citizens. A class action lawsuit, Tillie Hardwick v. United States of America, was won in 1983 by 17 Rancherias including Blue Lake Rancheria; the federal government was ordered to reinstate federal recognition for all the plaintiffs. These rights were returned in 1989 and the tribe now operates under their own constitution.

The Bridgeport Paiute Indian Colony is a federally recognized tribe of Northern Paiute Indians in Mono County, California. The Bridgeport Indian Colony is a federal reservation in Mono County, close to the Nevada border, in the unincorporated community of Bridgeport, California. The reservation is 40 acres (160,000 m2). Approximately twenty-one Tribal Members live on the Colony, and there are currently one hundred and five enrolled tribal members.

The Campo Indian Reservation is home to the Campo Band of Diegueno Mission Indians, also known as the Campo Kumeyaay Nation, a federally recognized tribe of Kumeyaay people in San Diego County, California. The reservation was founded in 1893 and is 16,512 acres (66.82 km2).

The Capitan Grande Reservation is a Kumeyaay Indian reservation in San Diego County, California, jointly controlled by the Barona Group of Capitan Grande Band of Mission Indians and Viejas Group of Capitan Grande Band of Mission Indians. The reservation has 15,753 acres (63.75 km2), located in the middle of the Cleveland National Forest and west of Cuyamaca Peak, and is uninhabited except for 7 people. The reservation was created by US Executive Order in 1875 for local Kumeyaay people. Its name comes from the Spanish Coapan, which was what the area west of the San Diego River was called in the 19th century. The dry, mountainous and chaparral lands proved inhospitable.

In the early 20th century, the state of California first created Lake Cuyamaca on the reservation, which provided water for growing San Diego. Then in 1931, the state flooded the heart of the reservation, creating the El Capitan Reservoir. Many Kumeyaay families had homes in the floodzone, and they petitioned Congress to prevent the loss of their land; however, Congress gave San Diego the right to buy the land without the local Kumeyaays’ knowledge or consent. The two tribes, Barona and Viejas, were forced to sell the land and with their proceeds they purchased their current reservations, the Barona Reservation and Viejas Reservation, respectively. In 1973, 7 people lived on the reservation.

The Mechoopda are a tribe of Maidu people, indigenous peoples of California. They are enrolled in the Mechoopda Indian Tribe of Chico Rancheria, a federally recognized tribe. Historically, the tribe has spoken Konkow, a language related to Maidu language. The tribe was formerly centered in a village located about 3 1⁄2 miles (5.6 km) south of contemporary Chico. The Tribe was terminated in the 1967, losing its 26-acre Chico Rancheria. “Approximately one-half of the old Chico Rancheria is now owned by Chico State University, Chico.”

The Mechoopda regained federal recognition in 1992. The Chico Rancheria is a federal reservation located in Butte County. The population on the rancheria is approximately 70.

The Colorado River Indian Reservation is an indian reservation in the southwest United States. It lies in western La Paz County, Arizona, southeastern San Bernardino County, California, and northeastern Riverside County, California. It has a total land area of 432.22 square miles (1,119.4 km2), and most of it lies within Parker Valley. It also borders the Palo Verde Valley in the southwest boundaries. Tribal headquarters are in Parker, the reservation’s largest community. The 2000 census indicated a resident population of 9,201 persons, of which 3,389 were enrolled tribal members from the Chemehuevi, Mohavi, Hopi and Navajo, which today, collectively form a geopolitical body known as the Colorado River Indian Tribes.

The Cachil DeHe Band of Wintun Indians of the Colusa Indian Community of the Colusa Rancheria is a federally recognized ranchería of Wintun Indians from central California. The tribe’s reservation is the Colusa Rancheria, also known as the Cachildehe Rancheria. It is located in Colusa County, California and was founded in 1907. The average elevation is 59 feet (18 m), and the ranchería is 573 acres (2.32 km2). 273 acres (1.10 km2) are in federal trust and 300 acres (1.2 km2) are owned privately by the tribe. Population is approximately 77.

The Digger Reservation is a 330 acre federally-recognized reservation in California. The Digger Reservation was established by Act of Mar. 3, 1893 (XXVII, 612). Before 1924, the Me-Wuk people were referred to as Digger Indians. On Sunday, April 20th, 1924 an effigy of a digger Indian was burned in a ceremony to change the Tribe’s name from Digger to Miwok. Today, this is one of two reservations of the tribe known as the Tuolumne Band of Me-Wuk Indians

The Elem Indian Colony of Pomo Indians (also known as the Elem Band of Pomo and Sulfur Bank Band of Pomo Indians) are a Native American band of Pomo based on 50 acres (200,000 m2) near Clearlake Oaks, California on the Eastern shore of Clear Lake. The Elem Indian Colony reservation was originally formed under the name Sulfur Bank Rancheria in 1949. The reservation lies between Clearlake Oaks to its north, and Clearlaketo its south.The tribe was organized in 1936 and has a population of about 100. Currently they are attempting to regain ownership of Rattlesnake Island near their reservation, where they had held ceremonies for centuries.

The Ewiiaapaayp Indian Reservation, formerly known as the Cuyapaipe Reservation, is located in eastern San Diego County, California. The reservation was created in 1891 by the US Congress. Two parcels of land form the reservation. The main Ewiiaapaayp Reservation is 4,102.5 acres (16.602 km2) large, located near Mount Laguna, and 19 miles (31 km) east of Alpine. Only 1% of this arable, with the majority being steep and rocky. No public utilities are available on this parcel. Because of the inaccessibility to this reservation, many Ewiiaapaayp families moved and enrolled in other Kumeyaay tribes.

The second parcel, known as the Little Ewiiaapaayp Indian Reservation, is 10 acres (40,000 m2) of land located within Alpine, which was put into trust in 1986. That land is leased to the Southern Indian Health Council, which provides health care for seven Kumeyaay tribes as well as non-Natives living in the area. In recent years, 13 people lived in seven houses on the reservation and bred horses. The only access to the reservation is on foot.

The Fort Yuma Indian Reservation is a part of the traditional lands of the Quechan people. Established in 1884, the reservation has a land area of 178.197 km² (68.802 sq mi) in southeastern Imperial County, California, and western Yuma County, Arizona, near the city of Yuma, Arizona.

The Graton Rancheria was a 15.45-acre (62,500 m2) property in the coastal hills of northern California.  Several California tribes signed treaties with the United States in 1851 which promised lands to the tribes; however these treaties were never ratified and many California tribes were left completely landless. In 1901, the United States Congress passed several laws, known as the Homeless Indian Acts. These paved the way for the establishment of Indian colonies and rancherías in California, which were purchased lands for area Indians.

When the B.I.A. tried to secure coastal lands for the Coast Miwok, the costs were prohibitively expensive so inland tracts were purchased. Seventy-five Native Americans tried to move onto the lands in 1920; however, they discovered only three acres of the rancheria were habitable. By 1954, the Eisenhower administration identified forty-four California Indian tribes or rancherias for termination, in order to facilitate assimulation into mainstream society.The Graton Ranchería was terminated by the US in 1958.

The Hoopa Valley Indian Reservation is located next to the territory of the Yurok at the connection of the Klamath and Trinity Rivers in northeastern Humboldt County. The reservation has a land area of 141.087 sq mi (365.413 km²) and is home to Hupa, Yurok, Redwood (Chilula), and Saiaz (Saia).

The La Jolla Band of Luiseño Indians are a federally recognized tribe of Luiseño Indians, located in northern San Diego County, California. The La Jolla Indian Reservation was established in 1875 by executive order of President Ulysses S. Grant. The reservation is 9,998 acres large, with a population around 390. There are about 700 enrolled tribal members.

The Cahto are an indigenous Californian group of Native Americans. Today they are enrolled as the federally recognized tribe, the Cahto Indian Tribe of the Laytonville Rancheria and a small group of Cahto are enrolled in the Round Valley Indian Tribes of the Round Valley Reservation. The tribe controls the Laytonville Rancheria, also known as the Cahto Rancheria, a federal Indian reservation of Cahto and Pomo people. The rancheria is 264 acres, and located three miles west of Laytonville in Mendocino County. It was founded in 1906. The reservation’s population is about 188.

The Likely Rancheria is a federal Indian reservation belonging to the Pit River Tribe. Likely Rancheria is 1.32 acres (5,300 m2)  and has the distinction of being the smallest Indian reservation in the United States.  It was purchased by the Pit River Tribe in 1922 and serves as their tribal cemetery. It is located about two miles southeast of the community of Likely, in Modoc County, California.

Washoe Tribe of Nevada and California